Though most of Turkey's academic world is applauding the Constitutional Court ruling that charges against their pro-peace colleagues violated their freedom of expression, a vocal pro-state minority feels otherwise. 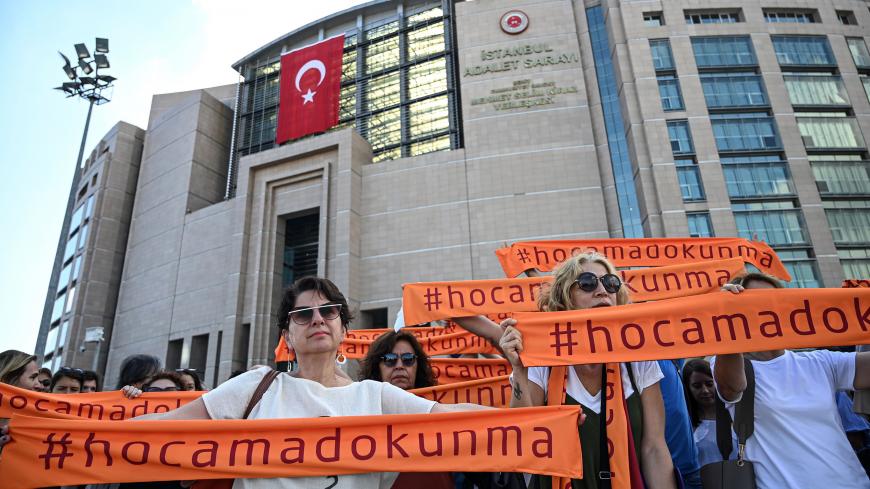 People hold scarf banners reading "Do not touch my teacher" during a demonstration outside of Istanbul's courthouse and before a trial of two academics, July 16, 2019. - OZAN KOSE/AFP/Getty Images

Following 17 years of one-party dominance, round-the-clock curfews, a coup attempt, mass purges and a string of elections marred by irregularities, Turkish society has become deeply polarized. Its academic institutions are not immune to the divisive political undercurrents.

On Friday, July 26, Turkey’s Constitutional Court ruled that legal proceedings against a group of purged academics violated their freedom of speech, drawing applause from rights advocates and condemnation from a separate group of pro-government academics.

The defendants were among 2,200 Academics for Peace who were persecuted for signing a peace declaration opposing Turkish military operations in the nation’s southeast in 2016. The court claimed charges of “making propaganda for a terrorist organization” violated the academics’ rights to freedom of expression as protected under the Turkish Constitution.

Yet what some viewed as a victory for democratic rights in an increasingly restrictive atmosphere for dissident voices, others saw as a betrayal of the state. Earlier this week, a group of 1,066 academics released their own declaration, saying the verdict “damaged the memories of our martyrs and veterans and hurt the social conscience.”

“Blaming a state for fighting terrorism is not regarded as freedom of expression in any country in the world,” read the statement, which was signed by people within the administrations of Agri Ibrahim Cecen University, Istanbul Aydin University and Medeniyet University, among other institutions.

The backlash against a ruling upholding the constitutional rights of Turkish academics — from within academia itself — highlights the deep fractures that have split Turkey’s higher education institutions under the ruling Justice and Development Party (AKP).

“In the Western world, academia prides itself on freedom of expression and no academic will argue whether someone can or can’t express their peaceful thoughts,” Erhan Kelesoglu, an Academic for Peace and purged assistant professor of political science at Istanbul University, told Al-Monitor. “This is an indication that Turkish academia is in very bad shape.”

Kelesoglu was sacked from his doctoral program in October 2016. Though he was convicted and given a 15-month prison sentence, the ruling was suspended and he remained out of jail, though with few job prospects, his resume stained by the dismissal, and a ban on foreign travel, like many citizens swept up in the mass purges.

Now he plans to use the Constitutional Court ruling in his ongoing case. With time, he also hopes to get his job back, but how lower courts interpret the ruling remains to be seen.

“The court decision does not mean an automatic return to our jobs,” said Sevilay Celenk, an Academic for Peace and purged associate professor from the radio, television and cinema department of Ankara University. He told Al-Monitor, “The decision implies that the local courts should rule for acquittal for the Academics for Peace, but it doesn’t say it directly.”

Regarding opposition to the ruling by some colleagues, Celenk said most of the people who signed the pro-government declaration are “from universities that could be identified as partisan universities. They lack any kind of scientific autonomy. The core idea of academic freedom, it’s not central to their work.”

The original aim of the pro-government declaration was to bring together 1,071 signatories in a historical reference to the year the Seljuks defeated Byzantine armies at the Battle of Manzikert, which marked the beginning of the Turkic conquest of Anatolia. The number of signatories fell to 1,066 after some academics complained that their names had been included without permission and other signatures were found to have been duplicated.

Multiple academics that signed the declaration against the court ruling were contacted for this article but did not respond in time for publication. Some Academics for Peace told Al-Monitor the pro-government declaration may have been come as a directive from university rectors, which are appointed by Turkish President Recep Tayyip Erdogan.

Others were surprised — not by the declaration itself, but by the limited number of academics and universities involved. Overall, Turkish professors maintain a formidable solidarity in the face of state persecution, said Berk Esen, an assistant professor who studies authoritarian regimes for the international relations department at Bilkent University in Ankara.

Esen said the court ruling sets a precedent for Turkey's about 6,000 ongoing cases involving purged academics. He doesn’t expect an immediate impact on academic liberties, but said the decision has created an opening through which greater civil liberties can be reestablished.

Gul, together with other former high-ranking AKP officials, is rumored to be forming a new party in the coming months that could potentially draw conservative voters away from Erdogan.

“This could be a sign of a major crack within the ruling coalition,” Esen told Al-Monitor. “I don’t buy that the Constitutional Court is independent and so I don’t buy that they haven’t considered the political weight of this decision.”