The collapse of Turkish academia

The Turkish government’s clampdown on the academic community has reached the country’s top faculties and scholars. 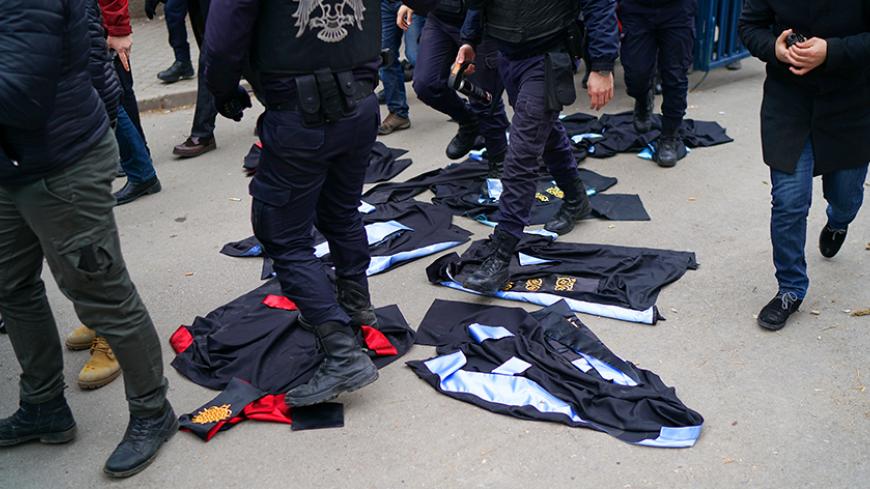 Riot police walk on gowns that had been laid down by academics during a protest against the dismissal of academics from universities following a post-coup emergency decree, Ankara University, Ankara, Feb. 10, 2017. - REUTERS/Umit Bektas

Turkey’s academic community has been a major target of the massive purges in the wake of the botched coup attempt last year, with more than 4,000 academics expelled from universities across the country so far.

The government had claimed that the purges — conducted at a stroke via legislative decrees — would target supporters of US-based preacher Fethullah Gulen, the accused mastermind of the putsch. After coming to power in 2002, the ruling Justice and Development Party (AKP) had opened dozens of new universities, and a large number of Gulenists had been appointed to their faculties as the alliance between the AKP and Gulen flourished. Indeed, the initial legislative decrees were largely aimed at scholars known as Gulenists.

But soon things changed, and academics of various stripes critical of the government came into the crosshairs. The latest legislative decree of Feb. 7 dealt perhaps the most devastating blow in this respect. More than 300 academics were expelled from their universities, including signatories of a Peace Declaration in January 2016, which had condemned a military crackdown in Kurdish-majority cities and towns. Academics who did not sign the original declaration but issued a separate one later to defend the right to free speech after their colleagues faced a judicial onslaught were not spared either. Illustrating just how wide the net was cast, the list included medical professor Cihangir Islam, a prominent Islamic activist and husband of Merve Kavakci, the first veiled woman to be elected to the Turkish parliament.

The expulsions had a crippling effect on campus. The worst affected was Ankara University, which has so far lost about 100 academics who had signed the Peace Declaration. The university’s prestigious faculty of political sciences is on the verge of collapse, with 23 courses left without lecturers and 50 postgraduate students without advisers, according to Ayhan Yalcinkaya, a senior faculty member. The 158-year-old faculty is a leading educational institution, having raised a plethora of top Turkish politicians and diplomats. Beyond that, however, it is an iconic hotbed of political activism and dissidence, a tradition the AKP had so far failed to break.

Economist Ozlem Albayrak, one of the scholars the faculty lost, believes the scale of the purge at the faculty of political sciences is not a coincidence. “The AKP government was never happy with an academia out of its control, and sought to interfere in this realm ever since it came to power. First, they opened countless new universities and staffed them with Gulenists, trying to create their own universities,” Albayrak told Al-Monitor. “The deep-rooted universities did not allow for such partisan staffing and interventions. Plus, those universities were already beyond the reach of the said academic staff because of their [inadequate] qualification.”

Albayrak, who was among the signatories of the Peace Declaration, believes the coup attempt of July 15, 2016, came as “a big opportunity” for the AKP. “[The government] got the chance to interfere in the deep-rooted, real universities with which it had been able to only quarrel thus far,” she said. “Thanks to the latest legislative decrees, academics critical of the government are now largely purged. The AKP’s real problem is not with Gulenists but with dissenters.”

In a symbolic act of defiance, Ankara University’s expelled academics returned to campus Feb. 8, backed by hundreds of students, civic groups and opposition parliament members. The campaign — called “No, we are not leaving” — generated support from students and scholars at other universities, while even some pro-government figures criticized the ferocity of the purge.

On Feb. 10, a big demonstration was called on the university’s campus in the capital’s Cebeci district, which houses the faculty of political sciences and several other faculties. This time, riot police greeted the expelled academics and their supporters, using dogs and pepper gas to disperse the crowd. Some academics were manhandled and dragged on the ground. But the most memorable moment was perhaps when the police trod under their boots the black gowns the academics had laid down in protest.

Commenting on the episode, Albayrak said, “Nothing could have illustrated better how we are faced with a government that cares nothing about students and universities and takes interest in education only in terms of controlling it. By blocking our entry to the campus and treading on the gowns with their boots, they showed that the academia they want is not only an academia they can control but also one they can crush and overrun.”

The unprecedented purge sparked condemnations from various opposition and pro-government quarters, a rare occurrence in the deeply polarized climate in Turkey today. While deputies from the Republican People’s Party and the Peoples’ Democratic Party lent vocal support to the academics, pro-government columnists spoke of “mistakes” and “injustices” in the expulsion lists.

According to media reports, Deputy Prime Minister Nurettin Canikli told a closed party meeting that the expulsions would be reviewed. But regardless of whether or not the government steps back, Turkish academia is badly crippled and will need a long time to recover.

Many academics have already left the country to seek new careers abroad, with Germany high on the list, in a bitter quirk of history. In the 1930s and 1940s, dozens of scholars and scientists fleeing Nazi Germany had taken refuge in Turkey, making great contributions to the development of academic institutions, including Ankara University's faculty of political sciences, in what was then a fledgling republic founded on the ashes of the Ottoman Empire. The brain drain is now reversed, but those who manage to relocate are still the luckiest. Many who have lost their jobs are condemned to “civil death,” facing travel bans and unemployment.

Nilgun Toker, a philosophy scholar expelled in January, describes the purges as “an intellectual genocide.” Ibrahim Kaboglu, a top constitutional law professor swept in the latest purge, sees an irony that perhaps summarizes best the state of affairs. Referring to some imams who have launched pro-government propaganda in mosques ahead of a key constitutional referendum in April, Kaboglu said Turkey has become a country where “the imams can speak out but the professors cannot.”