Turkey's judicial oversight body has been disbanded in the aftermath of the coup attempt, as Ankara continues to dissolve independent institutions and replace them with pro-government ones. 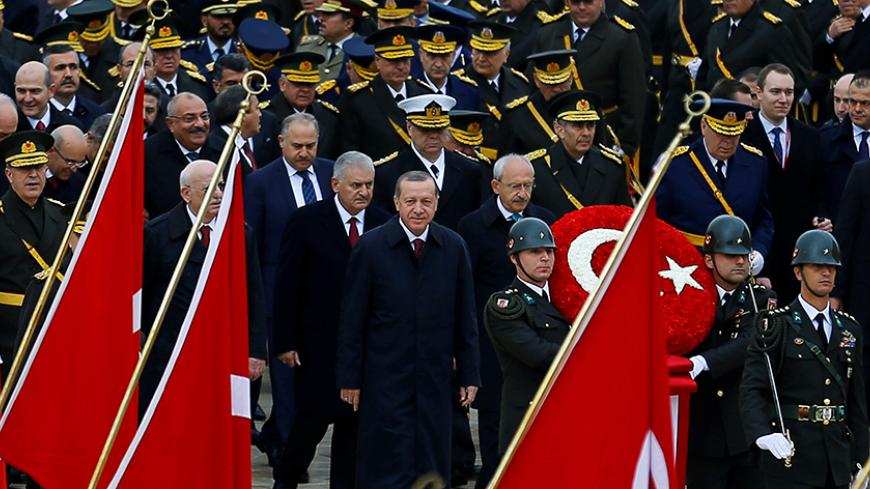 The Association of Judges and Prosecutors (YARSAV), the first nongovernmental organization of judiciary members in Turkey, was dissolved and its chairman landed behind bars after the July 15 coup attempt. Following the closure order, part of the first emergency-rule decree issued soon after the putsch, the Justice Ministry sent letters of the international bodies to which YARSAV was a member, asking them to admit as its replacement a group with ties to the government. The move is yet another example of Ankara’s tactic of disabling critical institutions and replacing them with pro-government ones.

YARSAV’s case is especially ironic in light of how the association was founded and functioned. It was created in 2006, at a time when followers of Fethullah Gulen, the accused mastermind of the putsch, were increasingly taking hold of senior positions in the judiciary, taking advantage of the then-close alliance between Gulen and the ruling Justice and Development Party (AKP). The 500 founding judges and prosecutors sought to get organized precisely against this trend of partisan staffing. YARSAV filed numerous lawsuits against appointments by the Justice Ministry, secured the cancelation of several regulations and guidelines on the grounds that they facilitated partisan staffing, and ensured that job interviews were recorded on camera. It was among the first vocal critics of mass probes and trials targeting mainly soldiers but also intellectuals and politicians over an alleged plot to unseat the government that the AKP would later admit was a setup by Gulenist police and judicial members to defang the military.

YARSAV was also among the first to speak up internationally about the threats to judicial independence in Turkey, and was soon admitted to the International Association of Judges and the European Magistrates for Democracy and Liberty (MEDEL). That was when its troubles started. YARSAV faced investigations and lawsuits seeking its closure, while founding Chairman Omer Faruk Eminagaoglu was removed from his post at the Court of Appeals and demoted to a provincial office amid judicial and disciplinary probes. Other founders came under similar pressures.

In short, YARSAV paid dearly for standing up against the Gulenist entrenchment in the judiciary, but ended up being closed for links with what Ankara now calls the Fethullah Gulen Terror Organization (FETO). In remarks to Al-Monitor, Eminagaoglu conceded that Gulenist jurists might have “infiltrated” YARSAV, apparently after Gulen and the AKP fell out in 2013, but stressed that the wholesale closure of the association spoke of other motives.

“A fourth of the judges and prosecutors expelled after the coup are said to be YARSAV members. Like all other institutions, YARSAV might have been infiltrated too,” he said, pointing out that many Gulenists used to conceal their affiliation. “Yet, at other public and private institutions, the measures have targeted the infiltrators [individually], and the same had to be applied to YARSAV. Otherwise, one is supposed to shut down the Justice Ministry as well. … The closure of YARSAV is a move that goes beyond the purpose of the struggle against FETO,” he added.

The closure was followed by the arrest of Murat Arslan, YARSAV's chairman, in late October. The reasons justifying the arrest include a charge that he had downloaded the ByLock messaging application, which Gulenists allegedly used to communicate. In his testimony to prosecutors, obtained by Al-Monitor, Arslan denied ever using the application. In another mind-boggling detail, no backup was made of the original software and data found on Arslan’s mobile phone, as the procedure usually goes in such cases. Asked whether he was aware that Gulenists were involved in illegal activities, Arslan told the prosecutor, “I’ve been aware that this is an illegal entity since the day YARSAV was established. I’ve been involved in active efforts against them since the Ergenekon case.”

Then there is the testimony of a secret witness who alleges that Arslan was the judiciary’s “imam,” or the top Gulenist operative in this realm. Lawyer Selcuk Kozagacli, the head of the Contemporary Jurists Association who was present at Arslan’s interrogation, told the press that the claims of the secret witness contained no specifics of dates and places. “This is called calumniation,” he said. “It can never serve as a basis for any criminal proceeding or an arrest.”

Arslan, who was in Great Britain on the day of the putsch and returned home two days later, was imprisoned pending trial after the court found him a flight risk. In the meantime, he lost his position as rapporteur at the Constitutional Court, and his family was ordered to leave the public lodgings where they resided.

YARSAV was the only Turkish group that the International Association of Judges and MEDEL had admitted. Its closure also meant an end to its active international efforts to explain how Ankara sought to control the judiciary and draw attention to the dangers of partisan staffing.

Following YARSAV’s closure, the Justice Ministry wrote to the International Association of Judges, informing them of the move and requesting the admission of the pro-government Platform for Unity in the Judiciary as a replacement, Eminagaoglu told Al-Monitor. “The International Association of Judges rejected the request, saying it admits only independent organizations,” he said. “The move was an attempt to ensure that groups praising the government and not those criticizing it are represented in international organizations. It’s what the government always does — dissolving opponent bodies and filling their places with pro-government ones. This is true not only for the judiciary, but also for the media and public service."