The Senate advanced a bill rebuking Turkish attempts to drill for gas near Cyprus. 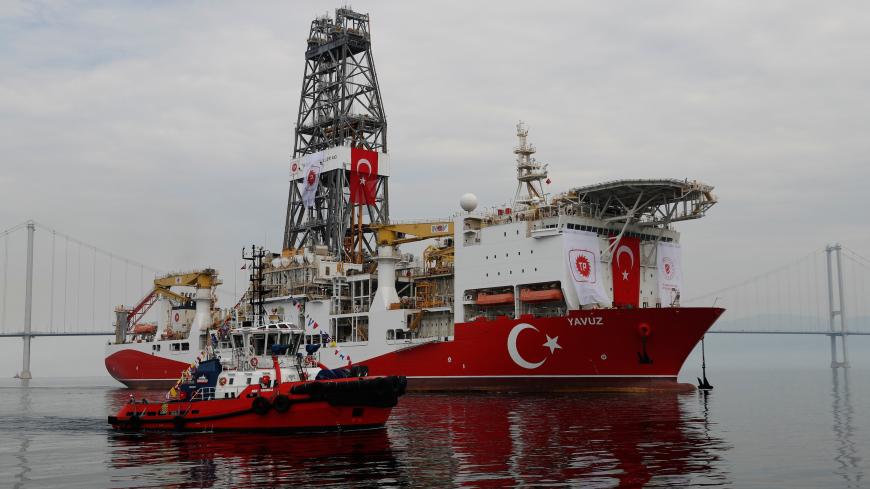 A Turkish drilling vessel, Yavuz, sets sail in Izmit Bay on its way to the Mediterranean Sea, off the port of Dilovasi, Turkey, June 20, 2019. - Reuters/Murad Sezer

The Senate advanced a bill today that could sideline Turkey in its maritime gas dispute with Cyprus, marking another point of contention in the increasingly fraught US-Turkish alliance.

Sen. Bob Menendez, D-N.J., the top Democrat on the committee, introduced the bill in April shortly before a trip to Athens where he lambasted Turkey in a speech, lumping the NATO ally in with “China and Russia” and blaming Ankara for “some of the most deep-seated problems in the region.” Rep. Ted Deutch, D-Fla., is sponsoring a companion version of the bill in the House.

The bill seeks to lift a decades-old arms embargo on Cyprus and deepen energy cooperation with Cyprus, Greece and Israel as overlapping maritime claims threaten to militarize the gas-rich eastern Mediterranean.

“The challenges posed by Turkey extend to how it treats its closest neighbors,” Menendez said in April. “We see this in the Exclusive Economic Zone of Cyprus. Turkish inference there is unacceptable. The Republic of Cyprus is well within its rights to explore for energy within its EEZ. And the US as well as the private sector must be prepared to support those efforts in word and deed.”

Turkey relies on its occupation of Northern Cyprus to assert drilling rights off the disputed island. But the US firm ExxonMobil and Qatar Petroleum both began offshore drilling for Nicosia in November.

Without mentioning Turkey by name, the legislation also requires the State Department to report to Congress on interference against Cypriot efforts to drill in its Exclusive Economic Zone and on incursions into Greek airspace. Menendez also took aim at “Turkish violations of Greek airspace over the Aegean” during his remarks in Athens.

Additionally, the bill is the fifth piece of legislation this Congress to contain a provision that would ban the transfer of F-35 fighter aircraft to Turkey unless Ankara cancels Russia’s pending delivery of the S-400 missile defense system amid fears that that it would allow Moscow to surveil US military hardware in the country.

Finally, the legislation provides $2 million in security assistance for Cyprus and $5 million for Greece while authorizing the Donald Trump administration to enter into energy cooperation agreements with both countries as well as Israel.

Lobbying disclosure firms reviewed by Al-Monitor reveal that the law firm DLA Piper met with and called several lawmakers and Capitol Hill staffers on behalf of Greece in the months before Menendez unveiled the bill in April.

Additionally, DLA Piper met and corresponded with staffers on both the Senate and House foreign affairs panels as well as the offices of other co-sponsors, including Sen. Gary Peters, D-Mich., and Rep. Dina Titus, D-Nev.

Supporters and detractors of lifting the Cypriot arms embargo are also taking their cases directly to the public.

Jonathan Schanzer and Bradley Bowman, the senior vice president and a senior director at the hawkish Foundation for Defense of Democracies, penned an op-ed in The Hill last month supporting Menendez’s legislation, pointing to Turkish attempts to block an Italian vessel from drilling on behalf of Nicosia.

Schanzer and Bowman said Russia has been selling arms to Cyprus and that Nicosia signed a cooperation agreement with China on its Belt and Road Initiative in April — shortly after Menendez’s visit.

Shortly thereafter, Kudret Ozersay, the deputy prime minister and foreign minister of Northern Cyprus, penned his own op-ed in The Hill opposing the legislation. Ozersay argued that lifting the arms embargo “would give the impression that the US is backing an arms race on the island.”

Correction: June 25, 2019. An early version of this article mistakenly said the committee's vote to advance the Eastern Mediterranean Security and Partnership Act was unanimous.