With 'Chernobyl,' Iranians talk other people's nuclear problems, for a change

The miniseries “Chernobyl” is a big hit in Iran and has sparked a debate between conservative and Reformist media about the alleged politics and messaging behind the production. 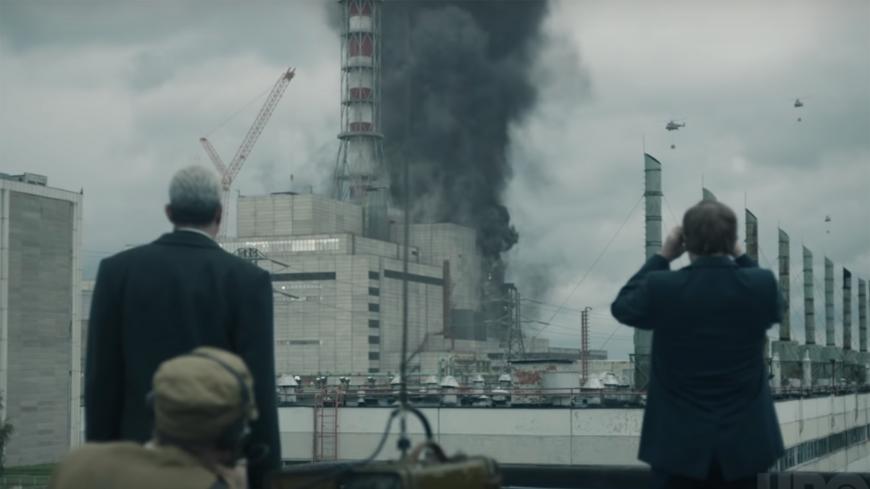 Iranians, who have been under pressure from the United States over the country's nuclear program, are enjoying discussing someone else’s nuclear problems for a change. The recently released HBO miniseries “Chernobyl,” focusing on the catastrophic nuclear accident in 1986, has proved to be wildly popular in Iran.

Despite four decades of enmity between Iran and the United States, Iranians have always been big fans of American television series. Among the most popular ones are Breaking Bad, Lost, Prison Break, 24 and Game of Thrones. Unsurprisingly House of Cards, the political thriller involving sex, lies, backstabbing and murder in the White House, also met with success, elicting positive reactions from conservative media outlets, which maintained that it presented a realistic portrait of inside the White House. Iranian state TV broadcast the political drama concurrently with the US presidential debates in 2016.

“Chernobyl,” with Persian subtitles, can be accessed through a number of websites. Iranian streaming services, such as Filimo and Namava, are competing in offering the dubbed version of series.

After its launch on June 4, a debate sprung up in the mainstream media, with politicians, opinion leaders and critics engaging in lively discussion over how accurately the series reflects what actually happened in 1986, when a series of explosions destroyed one of the reactors at the Chernobyl Nuclear Power Station, in Ukraine, then part of the Soviet Union, and released a plume of radiation that spread around the world. The back and forth has also focused on the motives behind the series' creation.

The debate got started the day after the series premiered, when presidential adviser Hesameddin Ashena tweeted that politicians and members of the establishment should watch “Chernobyl” and “learn a lesson” from it. He underscored that the final episode raised a key issue: “The main point of [the series] is the shocking question 'What is the cost of lies?'"

Masoud Farasati, a well-known film critic, railed against Ashena on state TV on June 8, urging him and politicians to “keep out of the film sector,” particularly when trying to make a political point. He also criticized the Americans for having produced the series in the first place, asserting, “As usual, Americans are taking advantage of the issue to claim [that they are] the righteous ones.’”

Ashena hit right back, tweeting on the same day that he was not advising politicians to watch “Chernobyl” for its political or artistic elements. Rather, he said, he wanted to emphasize the importance of consultation and honesty in crisis management and prevention.

Choosing sides, others jumped into the debate in no time. The Reformist daily Shahrvand argued on June 17 that Farasati had used “Chernobyl” to make a point about “capitalist plotting and propaganda,” while Ashena had used it as a lesson for officials on transparency.

The Reformist newspaper Sazandegi wrote on June 10, “The controversy that this five-episode series has created is beyond reviewing a tragic occurrence … [The series] caused many for the first time to think about nuclear energy and its possible dangers.”

The moderate news website Asr Iran also emphasized the consequences and repercussions of a mistake being made in the nuclear sector. “Chernobyl narrates a real story, portraying the men and women who bravely sacrificed themselves to save Europe from an unthinkable catastrophe. The series is worth watching,” wrote Asr Iran on June 3.

While the reformist and moderate outlets primarily focused on how “Chernobyl” has drawn attention to the risks of nuclear energy, the conservative and hard-line newspapers and news websites argued that the series is politically motivated and in line with the interests of the US government.

The conservative Fars News Agency said the sole purpose of the series was to make people “scared of peaceful nuclear energy.” On June 11, it editorialized, “Using intimidation and creating fear … is the Americans’ new way of justifying their monopoly over both political power and science.”

The hard-line newspaper Farheekhtegan maintained that “Chernobyl” was “political propaganda,” which depicted those killed as “victims of Soviet state ignorance,” not the victims of a nuclear disaster.

The conservative newspaper Qods asked, “Why would Americans decide to make this series, especially after 33 years?” A June 13 commentary stated, “In the ‘Chernobyl’ series, everything that happens is the fault of the Soviet statesmen, even the explosive quality of uranium! ‘Chernobyl’ paints a dreary picture of the Soviets with black clouds as well as the smoke of the brunt nuclear facility. [The series portrays the Soviet Union and the world] without beauty and without a soul.”

Qods concluded that the series is a warning to people not to return to the past “bipolar world order” filled with “dark clouds.”