US denies willingness to talk over S-400 concerns with Turkey

A Pentagon spokesman told Al-Monitor that its concerns with Ankara’s purchase of the Russian missile defense system “cannot be mitigated.” 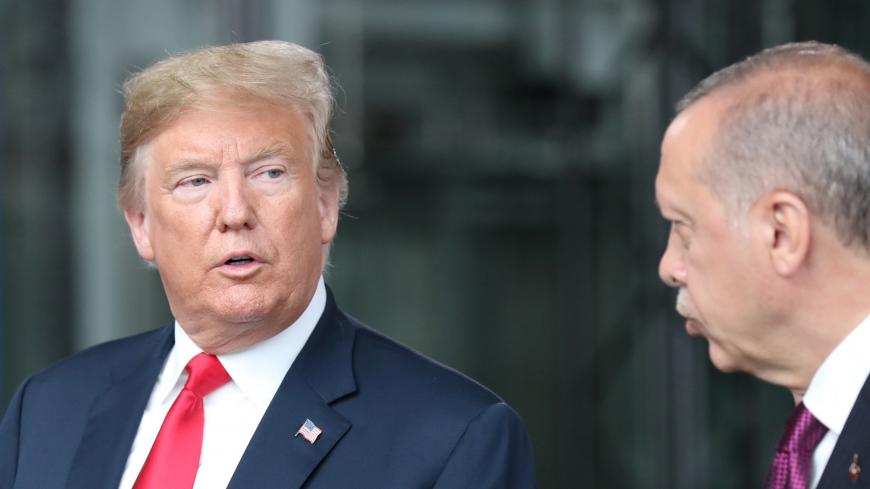 The US government is pushing back against reports that President Donald Trump acquiesced to Turkey’s request to discuss Ankara’s pending purchase of a Russian missile defense system, telling Al-Monitor that its concerns “cannot be mitigated.”

The comments come after the London-based Middle East Eye news site, citing “several Turkish officials,” reported today that Trump had overruled the State and Defense departments and agreed to create a working group on the issue in a phone call with Turkish President Recep Tayyip Erdogan earlier this week. US officials have suspended Turkey’s participation in the F-35 fighter jet program over the pending purchase, but Ankara believes it can convince them that the Russian technology isn’t a threat.

“We have been clear that purchasing the S-400 would create an unacceptable risk because its radar system could provide the Russian military sensitive information on the F-35,” Department of Defense spokesman Eric Pahon told Al-Monitor. “Those concerns cannot be mitigated. The S-400 is a system Russia built to try to shoot down aircraft like the F-35, and it is inconceivable to imagine Russia not taking advantage of the collection opportunity.”

Instead, the US administration continues to try to convince its NATO ally to purchase the US-made Patriot missile defense system.

“We have nothing new to announce at this time,” added National Security Council spokesman Garrett Marquis. “We have been clear that obtaining the S-400 would create an unacceptable risk to US technology, our pilots and our aircraft. The United States has sent technical teams to Turkey more than once and hosted counterparts here to discuss the threat posed by the S-400. We continue robust discussions with our Turkish counterparts at all levels.”

Turkey likewise denied reports that it is bowing to US pressure to delay its procurement of the Russian system.

When Turkey first floated the idea of a working group last month, Washington insisted that the F-35 and the S-400 were incompatible and asked Ankara to delay procurement of the Russian system by nine months, according to sources familiar with the substance of the negotiations. Turkey refused to delay delivery of the Russian system and the talks stalled, the sources said.

Aaron Stein, the director of the Middle East program of the Foreign Policy Research Institute, has written extensively on the S-400 crisis. He said he doubted that the United States would have changed its position on the working group.

Erdogan has reached out to Trump in the past to cut diplomatic corners in moments of crisis, but the results have been mixed. When Turkey refused to release North Carolina pastor Andrew Brunson on terrorism charges, in apparent hopes of extracting concessions in exchange for his release, Trump hit back with sanctions and tariffs on Turkish aluminum and steel. The Turkish lira went into a tailspin. The pastor was freed soon after.

On Wednesday, Turkey suddenly freed US-Turkish dual national Serkan Golge, a NASA scientist who was also being held on questionable terrorism charges, hours after Trump’s phone call with Erdogan. But there is little reason to believe that this will soften the US position on the S-400s. Moreover, a pair of Turkish nationals employed by the US Consulate in Istanbul continue to be held for their alleged involvement in the failed 2016 coup.

The State Department says both men are innocent and is demanding their immediate release.

“The Turkish government’s strategy on the S-400 has always been to try to peel Trump away from his advisers and the consensus of the national security bureaucracy,” said Max Hoffman, associate director of national security and international policy at the Center for American Progress. “The Turkish strategy makes some sense, as Trump has shown himself to be highly susceptible to personal flattery and loath to engage in direct confrontation with foreign leaders.”

“Erdogan may have charmed Trump and promised him an over-the-top state visit and the release of Serkan Golge in exchange for the working group,” Hoffman added. The Middle East Eye report also stated that Trump had accepted Erdogan’s invitation to come to Turkey on a state visit in July on top of their planned meeting on the sidelines of a G-20 summit on June 28-29, but the White House has not confirmed this.

In any event, Hoffman argued that “Trump has no ability to deliver on any promises regarding the F-35." He may be able to waive some sanctions, but “Congress is all over the F-35 issue” and has already prohibited the transfer of F-35s to Turkey in its pending annual defense authorization bill.

At best the working group could “turn into a fig leaf” allowing for some delay in the purchase of the S-400s, Hoffman concluded. But fears of Russian retaliation have so far prevented Turkey from pulling out of the deal. Today’s statement from the Turkish Foreign Ministry suggests that these have not abated.