Can Erdogan mend fences with US, Europe while saving face?

Turkey is seeking to improve relations with the West to stave off further damage to its ailing economy, but wants to do so without appearing to concede any ground or make concessions. 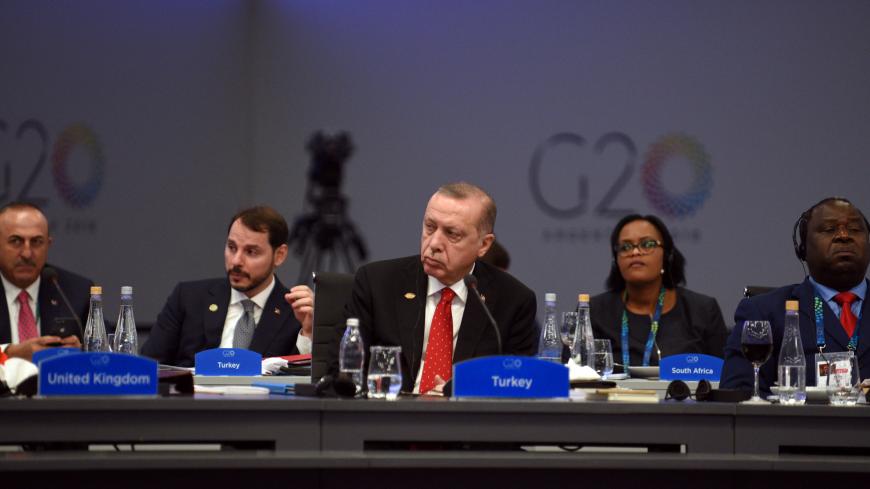 President Recep Tayyip Erdogan is trying not to show it, but the growing political and economic cost of Turkey's frayed relations with the West concerns him to the extent of his signaling a desire to mend fences with the United States and Europe. The measures he proposes to achieve this, however, have not convinced his Western partners. They remain focused on results, not on offers and vague promises designed to buy time as they see it.

At the same time, Erdogan remains determined to hold his ground by refusing to back down on the crucial issue of Turkey purchasing Russian S-400 anti-missile defense systems, which has turned into a litmus test for the future of US-Turkish relations. For Erdogan, the issue is also one of political prestige, as he is loath to give the impression of bowing to US pressure on any matter. He knows how his political rivals would use it against him.

Erdogan is also, however, aware of the dire consequences for the Turkish economy if Washington were to slap economic sanctions on Turkey over the S-400. He got a bitter taste of what such sanctions can do last year during the dust-up involving Turkey’s incarceration of the American Pastor Andrew Brunson.

Many argue that Erdogan is primarily concerned about the political cost to himself stemming from Turkey’s ailing economy. That cost became apparent in the poor showing of his Justice and Development Party (AKP) in municipal elections held March 31.

Washington is also threatening to withhold the delivery of F-35 fighter jets to Turkey if the Russian deal is not revoked. Sources close to Turkey’s military industry who requested anonymity told Al-Monitor that the top brass is worried about the implications to national security if Washington carries out its threat to impose military sanctions.

In addition, Turkey is a partner in producing the Lockheed Martin-built F-35, which means that expulsion from the program would land a hard blow to Turkish defense industry subcontractors. Remarks on May 27 by Defense Minister Hulusi Akar to the effect that delivery of the S-400s might be delayed are being evaluated in this light.

Washington argues that the S-400 poses a threat to the F-35 because it is designed to listen in and lock on to NATO’s advanced fighter jets. The US ambassador to NATO, Kay Bailey Hutchison, reasserted this view on CNBC on June 4. Underlining that the deployment of the S-400 under the same military control as the F-35 was “unacceptable,” Hutchison emphasized, “You can have one or the other, but not both.” This remains Washington’s hardened position.

The effect of US-Turkish ties on Turkey's economy was made apparent after a telephone conversation Erdogan had with Trump on May 29 to discuss the S-400. After leaks to the media from the Turkish side suggesting that Trump had accepted Erdogan’s offer to establish a joint commission to study the S-400 issue, the ailing Turkish lira made immediate gains against the dollar. The announcement that the two leaders would meet in Japan at the end of June, on the fringes of a G-20 summit, to further discuss the matter additionally contributed to the positive atmosphere. The lira had also made gains after Akar’s suggestion of a possible delay in delivery of the S-400.

Erdogan has pinned his hopes on Trump, whom he believes is more amenable toward Turkey than other parts of his administration are, most notably the Pentagon. He hopes Trump will use his executive authority to help Turkey out of the corner. In an attempt to placate Washington, Turkey released Serkan Golge, a dual US-Turkish citizen and former NASA scientist, a few hours after Erdogan’s conversation with Trump. Golge, whose release Washington had been demanding, spent three years in prison for alleged involvement in the failed coup against Erdogan in July 2016.

Given that the United States has critical military assets deployed in Turkey, Turkish officials believe that Trump will ultimately be hard pressed to cause a major crisis with Ankara at a time when his focus is increasingly on containing Iran. In a nutshell, Erdogan is angling for a settlement that will give him the S-400s, the F-35s as well as improved ties with Washington. Retired Ambassador Yusuf Buluc believes that Ankara is unlikely to get what it wants without making concessions.

“Even if Trump approved the joint commission Turkey has proposed, and I don’t know if he can do that on his own within the American system, this will not mean that Turkey can go ahead and start deploying the S-400s,” Buluc told Al-Monitor. “It is also highly likely that the commission will confirm what the American side has been saying all along. The commission might buy time for Ankara, but it will not change the outcome.”

Buluc also believes US pressure on Ankara on the matter will increase. “Turkey has no power to respond to this, so it will have to be the side that climbs down,” he observed. “How it finds a way to make concessions, without appearing to have made them remains to be seen.”

Meanwhile, some analysts think that the escalating situation in Idlib, which is revealing the limits of Turkey’s influence over Russia, is another driving force behind Erdogan’s desire to reach a settlement with the United States.

Despite Ankara and Washington's deep differences on Syria, they agree on the need to prevent Syrian government and Russian attacks on Idlib, a matter of crucial importance for Turkey. Diplomats and foreign policy analysts are waiting to see how Ankara steers its way through this maze without alienating Russia, given that Erdogan remains keen on maintaining good ties with President Vladimir Putin.

Erdogan is also aware of the negative economic consequences for Turkey resulting from Ankara’s bad relations with Europe. This is driving him to try to breathe new life into ties with the European Union.

On May 30, Erdogan unveiled the “Judicial Reform Strategy Document,” which, among other things, proposes gradually reforming the judiciary, enhancing democracy and expanding individual liberties, including freedom of expression, a highly contentious and topical issue in Turkey. The move comes on the heels of a scathing report by the European Commission on the state of the judiciary, democracy, and human rights in Turkey. Ankara rejected the report out of hand.

At the unveiling of the strategy, Erdogan underlined that the document is an expression of Turkey’s commitment to its EU membership process. His critics at home and in Europe failed to be convinced. They argued that presenting such a package was no more than a palliative exercise given that Erdogan has effectively obliterated separation of powers in Turkey and seized almost total control over the judiciary.

Erdogan's ability to have the Supreme Electoral Board (YSK) nullify the results of the March 31 municipal elections in Istanbul after the AKP lost is viewed as further proof of his control over organs of state that should be independent in a democracy. Retired Ambassador Selim Kuneralp emphasized that what Erdogan presented amounts to a declaration of intent to be implemented over a five-year period.

“If the intention is good, especially regarding freedom of expression, he can take some immediate steps to prove this. Lifting the ban his government placed on Wikipedia might be a good start,” Kuneralp told Al-Monitor. “The European Commission has always underlined the importance of implementation over declarations of intent. Its approach to this strategy document will be the same.”

Asked why Erdogan had chosen this moment to unveil such a document, Kuneralp cited economic reasons. “The Turkish economy is going from bad to worse. It is only a matter of time before the government starts touring Western capitals for money and fresh investments,” Kuneralp said. “Investors, however, continue to stress the importance of a strong and reliable judicial system in countries they propose to invest in. This document aims to assuage them.”

In regard to the document's intent, Kuneralp added, “It is unlikely do this, just as it is unlikely to reinvigorate Turkey’s bid for EU membership.”