Turkey hopes a working group with Russia will ease attacks on Syria’s last rebel-controlled territory, but will convincing Russia require concessions in other foreign policy objectives? 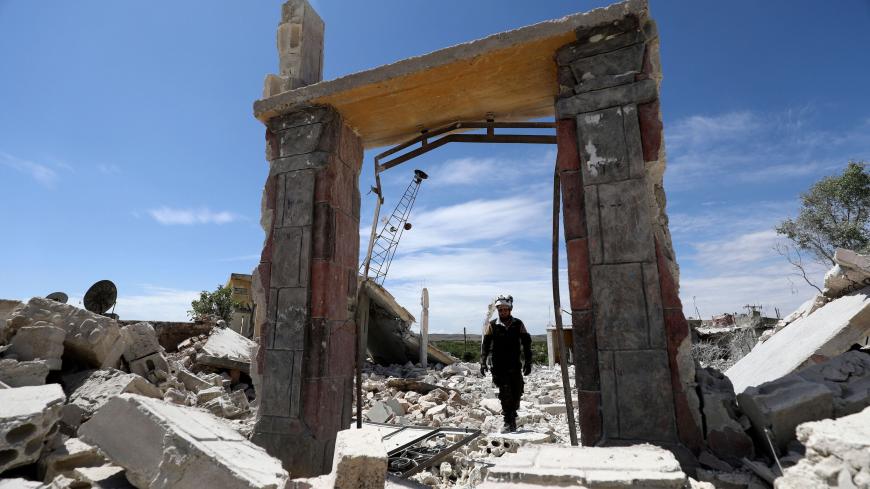 A member of the Syrian Civil Defense (White Helmets) inspects the rubble following shelling by Syrian regime forces and their allies on a the village of Maarit Sin in the countryside of the rebel-held Idlib province on May 11, 2019. - OMAR HAJ KADOUR/AFP/Getty Images

ISTANBUL — Turkey is intensifying diplomatic efforts with Russia to deescalate violence in the northwest Syrian province of Idlib, its foreign minister said Wednesday, as it seeks to stave off an all-out assault on the opposition’s last stronghold that could spark a humanitarian disaster.

Moscow and Ankara support opposing sides in Syria’s eight-year conflict but have worked together to move the warring parties toward a political resolution. Their efforts include agreeing to a demilitarized zone last year for Idlib, which is controlled by militias fighting President Bashar al-Assad’s forces and where more than 3 million civilians are sheltering from the war.

With Europe and the United States largely watching from the sidelines, Turkey has taken on a vigorous role in the Syrian end game and has cultivated closer ties with the war-torn country’s two other major foreign players, Iran and Russia. It's dented Turkey’s relations with its Western partners, especially over Ankara’s plans to buy a Russian missile defense system.

Turkey and Russia will convene a working group as soon as possible to try to restore relative calm to Idlib, even as Assad’s army undermines the “progress” Ankara and Moscow have achieved, Foreign Minister Mevlut Cavusoglu told reporters in comments broadcast live on TV. “We have intensified our efforts. The regime’s aggressive stance must end, and the attacks [in Idlib] must stop.”

Assad’s troops, backed by Russia, began attacking Idlib late last month, killing as many as 400 people and forcing 150,000 others to flee the most intense fighting in the war in almost a year. Turkey has backed Assad’s opponents since 2011 and fears the attacks will push refugees to its border.

President Recep Tayyip Erdogan is trying to rescue the deal he reached in September with his Russian counterpart Vladimir Putin and told him in a phone call on Monday the Syrian government is “seeking to sabotage Turkish-Russian cooperation.” At risk is the process to draft a new constitution for a post-war Syria, Fahrettin Altun, the Turkish president’s press adviser, tweeted.

The phone call coincided with media reports that Turkey and the United States were searching for a way out of their own diplomatic impasse over NATO member Turkey’s purchase of the Russian-made S-400 missile defense system. Any delay or cancelation of the weapons deal could jeopardize convergence with Russia.

“Turkey is stuck in a difficult situation. It is trying to maneuver between Washington and Moscow and forge an independent policy in the face of enormous pressure from both countries,” said Nicholas Danforth, a senior visiting fellow with the German Marshall Fund.

The United States says the S-400s will compromise NATO security and that it is designed to shoot down the stealth F-35 fighter jets that Turkey is helping to build. Turkey’s military, NATO’s second largest, could face expulsion from the F-35 program when it takes possession of the Russian batteries in July. Ankara says it was compelled to buy the $2.5 billion anti-aircraft system because the Pentagon initially refused to sell it Patriot missiles.

Last week US officials asked Ankara to postpone until 2020 delivery of the defense system to give each other time to resolve the crisis, according to press reports.

But on Wednesday Cavusoglu denied Turkey would delay the purchase despite the threat of US sanctions. Acquiring the S-400s could trigger Congress’ Countering America’s Adversaries Through Sanctions Act (CAATSA), which requires President Donald Trump to impose penalties on entities who “engage in a significant transaction with the Russian intelligence or defense sector.”

“No later than July we will know whether Turkey chooses to remain within its traditional and real Western alliance or trade that with a fictional so-called ‘Eurasian’ one,” said Aydin Selcen, a former Turkish diplomat who now works as an independent foreign policy analyst.

“Procuring the S-400s but leaving them unpacked or mothballed in Turkey, or sending those air-defense batteries to a third country like Qatar or Azerbaijan are not real options as CAATSA prescribes clearly sanctions once those are bought,” he said in an interview.

Sanctions could prove devastating for Turkey’s brittle economy, in the throes of a recession that has driven unemployment to 14.7%, according to official job statistics released Wednesday.

“Taking a more cooperative stance with Washington — whether by delaying the S-400 purchase or simply hinting at it — would be one way to keep the economy on an even keel in the short term,” Danforth told Al-Monitor. “It is performing a delicate balancing act on a stormy sea.”

Another dispute with the United States is over territory in northeastern Syria now held by US-backed Kurdish militants whom Turkey views as terrorists. Turkey wants to take control of a “safe zone” there after a planned US withdrawal, while Washington has promised to protect the Kurds.

Investor worries that Turkey is breaking up with the West, including backtracking on political and democratic rights, have shaved more than a quarter of the value off the lira in a year. A currency crisis erupted in August after Trump slapped largely symbolic sanctions on Turkey over its refusal to free Andrew Brunson, an American pastor jailed on espionage charges.

Brunson was released in October, but other American citizens and Turks working at US diplomatic missions are either in prison or face prosecution.

On Wednesday, an Istanbul court held the second hearing in the trial of Metin Topuz, who worked for the US Drug Enforcement Agency in Istanbul and was arrested in late 2017 on accusations he collaborated with coup plotters who failed to oust Erdogan in 2016. Topuz denies the allegations and faces life in prison if convicted.

Jeffrey Hovenier, Washington’s acting ambassador in Ankara, was quoted as telling reporters at the courthouse there was "no credible evidence of any criminal wrongdoing" against Topuz and his government expected the trial to be conducted "swiftly, transparently and fairly." The court set the next hearing for June 28.

That hearing could wind up being held just a few weeks before Trump makes his first visit to Turkey. Finance Minister Berat Albayrak, who met Trump in the Oval Office last month, said at the weekend talks were underway for the American president to visit Turkey in July.