Erdogan flirts with fire as sparks fly over missile deal

President Recep Tayyip Erdogan seems to almost revel in the controversy over Turkey's planned purchase of a Russian missile system even as pressure mounts to scrap it and stakes continue to rise. 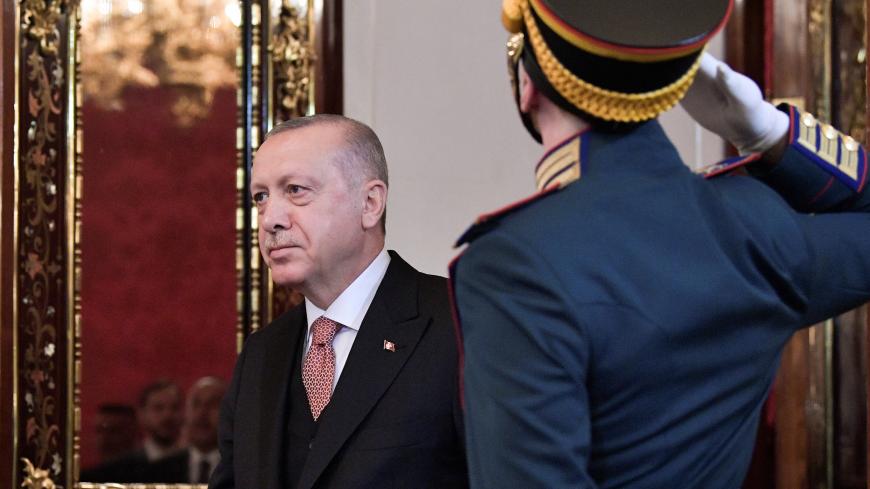 Turkish President Recep Tayyip Erdogan walks past an honor guard as he attends a meeting with his Russian counterpart Vladimir Putin at the Kremlin in Moscow, Russia, April 8, 2019. - Sputnik/Alexei Nikolsky/Kremlin via REUTERS

Turkey’s President Recep Tayyip Erdogan has reaffirmed his determination to install a Russian S-400 missile system on Turkish soil, saying he could even move delivery forward despite ever louder warnings from Washington of the likely damage the move would do to Turkey’s status within the NATO alliance.

Speaking to a handful of his favorite media representatives en route home from Moscow, where he met with his new ally Russian President Vladimir Putin, Erdogan seemed to almost revel in the controversy. “Wherever we go, they ask us ‘Are you buying [the S-400s] or not?’ We respond that ‘This is our finalized deal, everything is in order.’ Delivery of the S-400 is scheduled for July.” He went further, saying, "Delivery may be moved forward.”

Erdogan appeared to dismiss the US administration’s announcement that it would suspend sales of state of the art F-35 fighter jets to Turkey should the Russian deal proceed. “They already gave us three [F-35s]; today they gave us a fourth. Training is continuing. As of now, there is no negative announcement with regard to the F-35s,” he claimed. Erdogan was likely referring to the transfer of the jets to Turkish air force pilots for training at Luke Air Force Base in Arizona. What he failed to mention, however, is that the aircraft and scores more slated for delivery will remain in US custody unless Ankara alters course, even though Turkey is part of a multi-billion-dollar consortium to produce the new generation fighters.

His cavalier approach flies in the face of an op-ed penned by ranking members of the Senate Armed Forces Committee and the Senate Foreign Relations Committee warning, “The choice made by President Recep Tayyip Erdogan of Turkey will have profound consequences for his country’s place in the world, its relationship with the United States and its standing in NATO.” The authors noted that the S-400 missiles were “built to shoot down the F-35 fighters.”

But even before the ink on the New York Times piece had dried, Turkish Foreign Minister Mevlut Cavusoglu suggested that Turkey would buy a second S-400 missile battery. In an interview with the pro-government NTV news channel today, Cavusoglu asserted, “If the United States does not want to sell Patriot [missile defense systems] to us, tomorrow we may buy another S-400 system and we also can purchase other air defense systems.” He added, “If we can’t have the F-35 jets, we will be forced to satisfy our fighter jet needs somewhere else.”

That is something of an understatement. The bipartisan lawmakers warned that unless Erdogan scrapped the S-400 purchase, “sanctions will be imposed as required by United States law under the Countering America’s Adversaries Through Sanctions Act.” They promised the actions would “hit Turkey’s economy hard, rattling international markets, scaring away foreign direct investment and crippling Turkey’s aerospace and defense industry.”

The op-ed coincided with the introduction of draft legislation by Sen. Roger Wicker (MS) and Ben Cardin (MD) seeking the imposition of Global Magnitsky Act-inspired sanctions on unnamed senior Turkish officials if Turkish authorities fail to free two Turkish nationals working at the US Consulate in Istanbul and NASA physicist Serkan Golge, a dual Turkish and American citizen. They stand accused of participating in the failed 2016 coup against Erdogan. The move signals that the freeing of North Carolina Pastor Andrew Brunson last year in the face of similar pressure has not gotten Turkey off the hook.

Nate Schenkaan, director for special research at Freedom House, noted that if the bill is passed, the administration would be likely to implement it. He told Al-Monitor, “In any bill like this, there is some kind of room for the administration to delay or try to interpret less restrictively. But there hasn’t been much room between the administration and Congress on the issue of detained Americans and American employees.”

Shenkaan, continued, “The important step here is that it widened the discussion to include consular employees — previous bills only included American citizens and asset freezes and were limited to visa bans. I would take it very seriously if I were Turkey.”

So why isn’t it, especially at a time when Erdogan is looking vulnerable on a number of fronts? The economy is continuing its downward spiral, one the top reasons his ruling Justice and Development Party (AKP) lost virtually all of Turkey’s big cities to the main opposition in the March 31 municipal elections. Citing alleged fraud, the AKP has said it will demand a rerun in Istanbul, where opposition candidate Ekrem Imamoglu maintained a 15,000-vote lead even after ballots were recounted in 38 districts at the incumbents’ request.

The prevailing uncertainty can only exacerbate the country’s financial woes — investors came away unimpressed by Economy Minister Berat Albayrak’s pitch on structural reforms today, saying it was full of promise but low on substance — and make it all the more likely that the AKP would lose in any rerun. The low chances of success, critics say, suggest that the government will simply rig the results, pushing Turkey deeper into the league of authoritarian basket cases like Venezuela. As the lawmakers observed in their essay, “The more isolated Turkey is from its allies, the more power Mr. Putin will have in the relationship.” Kremlin spokesman Dmitry Peskov could barely conceal his glee at the prospect of Ankara buying more Russian kit. “Russia is open, Russia has the appropriate capabilities, technological competence and of, of course Russia is looking for opportunities to expand military-technical cooperation,” he crowed.

There are various explanations for Erdogan’s refusal to budge on the S-400s.

Nicholas Danforth, a historian and senior visiting fellow at the German Marshall Fund of the United States, said, “Turkish leaders have consistently presented their purchase of the S-400 as a declaration of independence from the United States and a crucial step towards a more independent foreign policy.” He told Al-Monitor, “Much as Washington remained convinced until quite recently that Ankara would eventually back down, Ankara appeared equally certain that Washington was bluffing about sanctions.”

To be sure, Erdogan may well be betting it will all blow over in time, as happened when the United States slapped an arms embargo on Turkey when it invaded northern Cyprus in 1974. By this reckoning, Turkey is too big a prize for the United States to let go of and that Erdogan’s personal chemistry with President Donald Trump might be leveraged along with the latter’s affinity for Putin to save the day.

But Aaron Stein, director of the Middle East program at the Foreign Policy Research Institute, offered, “He’s made a political choice to deepen ties with Russia over the US.” If so, why? Again, there are multiple answers. Erdogan’s deeply held suspicion that the Barack Obama administration supported the botched putsch may be one. The other is Erdogan’s unremitting fury shared by his generals over the United States’ continued partnership with a Syrian Kurdish militia that is closely intertwined with another that has been fighting the Turkish military for the past 34 years. Danforth concluded, “barring a diplomatic miracle, both sides should brace for the coming crash.”