Turkey’s deepening economic woes are widely seen as the prime reason behind its decision to delay the activation of the Russian S-400 systems. But an array of other factors have been at play that are forcing Ankara to think twice. 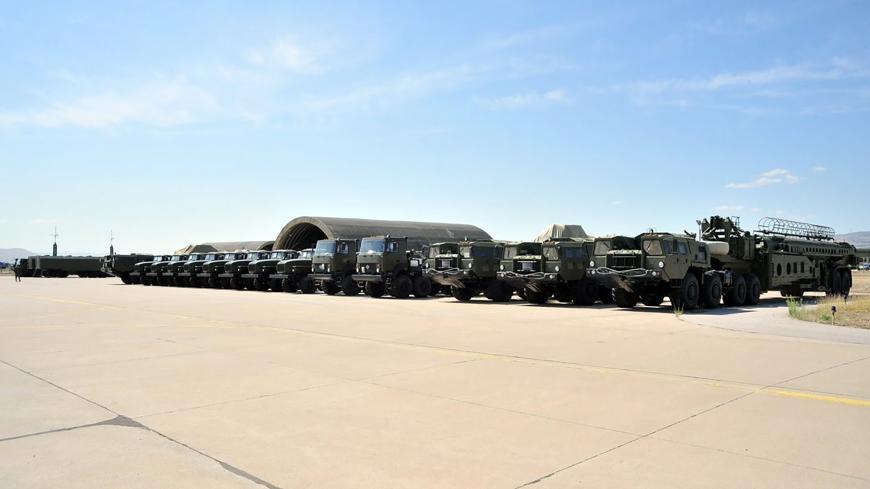 When Russia began delivering the S-400 air defense systems to Turkey last summer, the NATO member country was almost in a festive mood, with television channels broadcasting live the arrival of cargo planes to an air base outside of Ankara from July to August. Around that time, President Recep Tayyip Erdogan announced the systems would become operational in April 2020 — a timetable he would confirm at least seven times thereafter despite US moves to dissuade and penalize Turkey. The missiles arrived by sea in December as Ankara was already testing the systems. In January, air force officers who received training in Russia on operating the systems were officially assigned to their new duties.

With April already rolling along, the S-400s remain unpacked at Murted Airfield Command. The way Ankara chose to disclose the “delay” was a low-key statement to Reuters. “There is no going back on the decision to activate the S-400s, [but] due to COVID-19 … the plan for them to be ready in April will be delayed,” an anonymous official told the news agency April 20.

The delay should have pleased Washington, though it reiterated its concerns. “We continue to stress at the highest levels that the S-400 transaction is the subject of ongoing CAATSA sanctions deliberations, and it remains a major obstacle in the bilateral relationship and at NATO,” State Department spokeswoman Morgan Ortagus said, referring to the Countering America’s Adversaries Through Sanctions Act. “We are confident that President Erdogan and his senior officials understand our position,” she added.

Obviously, the reason for Ankara’s decision to delay the activation of the S-400 regiment, made up of four batteries worth $2.5 billion, is not technical. And even though the coronavirus pandemic is cited as the reason, the decision is utterly political. Tellingly, the pandemic has not disrupted any Turkish military operations either at home or in Syria and Iraq. It has had no impact in military terms that requires postponing the activation of the systems.

Turkey’s worsening economic woes are widely seen as the prime reason behind the postponement. Indeed, any sanctions under CAATSA would heighten the grave economic risks the pandemic is posing to Turkey. Of note, Ankara has already approached the US Federal Reserve for a currency swap deal, seeking up to $10 billion amid a drawdown in foreign reserves. Due to domestic political concerns, Ankara is reluctant to seek help from the International Monetary Fund. In short, activating the S-400s could have a big economic cost for Turkey akin to the currency crisis in the summer of 2018, which was triggered by a row with Washington over the detention of an American pastor.

Yet Turkey’s desperate need for hard currency to salvage its pandemic-hit economy is not the only factor at play. The delay is driven by at least three other factors: namely, Ankara’s shifting geostrategic orientation in Syria in a bid to balance Iran and Russia, and its need to remain in the good graces of US President Donald Trump, its sole ally in Washington, and manage public perceptions at home.

In Syria, Turkey’s face-off with its partners Russia and Iran in Idlib in February showed how Turkish and American interests have become more aligned in the Syrian war. The limits of cooperation with Moscow have come to clearly manifest themselves, both in Syria’s northwest and northeast. Despite a deal between Erdogan and Russian President Vladimir Putin in early March, the confidence gap between the two sides has grown over the critical M4 highway in southern Idlib, where a fresh crisis seems to be brewing amid Ankara’s attempts to unify Sunni armed groups — moderates and radicals alike — in a bid to counter the increasing presence of pro-Iranian militia and the reinforced troops of the Syrian regime. Washington, for its part, is fully aware that it could have no other ally than Ankara with the capacity to balance Russia and counter pro-Iranian military presence in northern Syria and around Deir ez-Zor to the east.

Another factor has to do with the personal relationship between Erdogan and Trump, who has been rather lenient toward Turkey in the face of congressional pressure for sanctions. According to a source in Ankara who requested anonymity, the crisis over pastor Andrew Brunson in 2018 taught Erdogan a lesson about the consequences of bickering with Trump, and the coronavirus pandemic was a godsend to avert a fresh crisis over the S-400s. “When Trump hosted Erdogan for four hours at the White House summit in November 2019, he personally brought up and emphasized the S-400 issue. He made it clear that activation was a redline for Washington, and he could no longer defend Ankara if the systems were activated,” the source said, adding, “The [coronavirus] outbreak came just in time for Ankara to overcome that squeeze.”

Finally, there is Turkey’s domestic front. Activating the S-400s at present risks triggering public pressure led by the opposition to move the systems to the Syrian border to protect the Turkish troops in Idlib. About 22,000 Turkish troops are currently deployed at 56 outposts across Idlib, deprived of any defense against medium-range air and ballistic missiles, which has led to the loss of 61 soldiers since late February. Opinion polls show that the campaign in Idlib has lacked the public support accorded to Turkey’s earlier military campaigns in Syria. Erdogan would be hard-pressed to explain why the activated systems are kept in Ankara while Turkish soldiers in Idlib are in urgent need of air cover, but moving the weapons to the border would obviously spark a fresh crisis with Moscow. Thus, stepping back from activating the systems for now serves also to avoid a crisis in domestic politics.

No doubt, the decision is annoying to Moscow, which has been hoping to sell Ankara another regiment of four S-400 batteries after Turkish pledges to buy more. How long could Erdogan keep the S-400 unboxed without falling out with Putin? The delay may have bought Ankara a couple of months’ time, but managing the crisis without infuriating either Putin or Trump remains a tall order.