Turkey bets on NATO as escape route in S-400 crisis

In a move to buy time, Erdogan is taking the S-400 crisis to NATO grounds, as Ankara’s testing of the Russian-made system the week before a NATO summit shows Ankara still has maneuvering room. 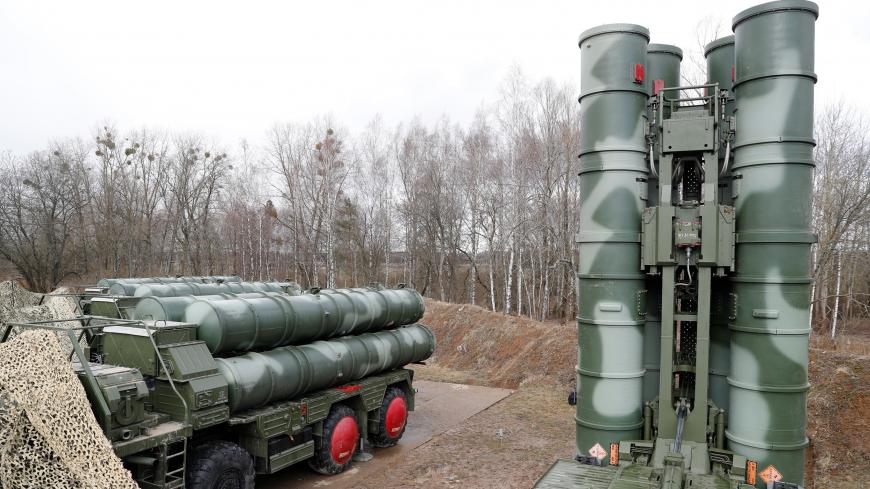 A new S-400 "Triumph" surface-to-air missile system is seen after its deployment at a military base outside Gvardeysk near Kaliningrad, Russia, March 11, 2019. Turkey tested its S-400 system Nov. 25-26 over Ankara. - REUTERS/Vitaly Neva

Less than two weeks after President Recep Tayyip Erdogan’s trip to Washington, which secured the shelving of sanctions against Turkey for the time being, Ankara muddied the waters again, testing the Russian S-400 air defense system that lies at the core of bilateral tensions. Ankara had been expected to draw up a middle-way formula that would not anger Russia, while the United States had left room for reconciliation on the condition that Turkey does not activate the $2.5 billion system. Also, the dialogue mechanism between Erdogan’s spokesman, Ibrahim Kalin, and US national security adviser Robert O’Brien — agreed upon during Erdogan’s Nov. 13 visit to the White House — has fed expectations that the United States would keep the threat of sanctions suspended and that Turkey would delay the activation of the S-400s while the contacts continued.

Yet the schedule agreed on between Ankara and Moscow appeared to be on track Nov. 25-26 as F-16 jets flew over Ankara to test the S-400. Foreign Minister Mevlut Cavusoglu said Turkey never intended to keep the system unpacked and never pledged to not activate it. In his meeting with President Donald Trump, Erdogan “made it clear that no one would be allowed to interfere in our sovereignty realm,” Cavusoglu said.

Russia, meanwhile, signaled that cooperation with Turkey was ongoing. Alexander Mikheev, the head of state arms exporter Rosoboronexport, announced plans to supply more S-400 units to Turkey. “We hope that in the first half of 2020 we will sign the contract documents,” he said, adding, “But I want to stress that military technical cooperation with Turkey is not limited to the supply of the S-400s. We have big plans ahead.”

After delivery of the S-400s began in July, the United States spoke of penalizing Turkey under the Countering America’s Adversaries Through Sanctions Act, but the move has not materialized and Washington is now saying it will slap the sanctions the day Ankara activates the system. The flexible American position has allowed Ankara to create maneuvering room for itself.

The system is scheduled to be activated in April. It seems that until then, Turkey will focus on persuading its Western counterparts against sanctions by using its strategic leverage. Erdogan’s government wants to keep the bargaining process going and show its counterparts that they, too, stand to lose from the standoff. More importantly, it seems to eye a solution on NATO ground, drawing also on Trump’s lenient attitude toward Turkey. Kalin said Turkey will put forward new proposals to address its allies’ security concerns over the Russian system but “will not back down from the S-400s.”

Keeping the S-400s apart from NATO systems technically is a commitment that Ankara has already made. Additionally, a middle-way formula could involve the deployment of the system only in Ankara and limiting S-400 units' radar range to 100 kilometers (62 miles), well below the maximum range of 600 kilometers (373 miles), to prevent conflict with NATO systems and eliminate the risk of compromising the secrets of the F-35 stealth jet. This would require Russia to show flexibility as well and offer software matching that purpose.

Asked about the viability of middle-way formulas to persuade NATO, a Turkish defense expert, who requested anonymity, told Al-Monitor, “They are technically possible, but look unrealistic to me. Since this is not the only source of the problem, such formulas are irrelevant. I think the bridges have been burned or are about to be burned.” Then why would Ankara set up a dialogue mechanism with Washington? “To buy time and make one last move, possibly,” he replied. According to the expert, the scenario of Turkey expanding its defense partnership with Russia appears more likely at present.

Russia expert Aydin Sezer still sees a chance that middle-way formulas could work out. “The United States’ problem has to do with the capacity of the radars. It does not want the radars to test the F-35 jets. If a short-range radar is deployed, the United States might not object to the S-400s protecting [only] a 100-kilometer area over Ankara,” he told Al-Monitor. For Sezer, Erdogan’s insistence on the S-400s has to do with his need for “fuel” in domestic politics. “I think the S-400 issue is still being kept as a bargaining chip in ties with the United States. Just like Operation Peace Spring [in Syria] and the eastern Mediterranean issues, the S-400s are a useful issue in domestic politics,” he said.

After his visit to Washington, Erdogan’s essential maneuver has been taking place on NATO grounds. NATO’s 70th anniversary summit, scheduled for Dec. 3-4 in London, offers Turkey an opportunity to use its weight as a member to soften the objections. On the eve of the summit, Ankara has shown how it could paralyze the alliance, which is currently seeking approval by all 29 members for a military plan to defend Poland, Lithuania, Latvia and Estonia in the event of Russian aggression. Ankara has refused to approve the plan until NATO recognizes Turkey’s Kurdish adversaries in Syria — the People’s Protection Units and the Democratic Union Party — as a terrorist threat. The standoff reinforces the scenario that Turkey might extract concessions in the S-400 controversy after cornering the alliance with sensitive issues in Syria.

Tarik Oguzlu, a scholar of international relations, believes that taking the S-400 spat to NATO is a logical move in the sense that it allows Turkey to string the crisis out over time. According to Oguzlu, “Any negotiation via NATO is in Turkey’s interest because of the multilateral mechanism there. America’s position is problematic in itself, for there is no consensus between Trump and the security establishment. … A solution within the NATO framework will relieve everyone. It is logical to buy extra time or throw the ball out of bounds.”

But what if Turkey’s cards at the NATO negotiating table backfire, leading it to backpedal on the S-400s? How would Russia react to such a move?

A cliche argument is that Russia is trying to pull Turkey away from NATO, that the S-400 deal is essentially aimed toward that end and that Moscow will punish Ankara if it reneges on the deal. Yet Russia’s long-term strategies require it to refrain from making a big fuss in response. As evidenced by Ankara’s resistance to NATO’s defense plan for the Baltics and Poland, a Turkey that stays within NATO and rocks the boat from time to time serves Russian interests.

Sezer said the partnership Moscow and Ankara are building goes beyond the S-400 deal. “Even if Erdogan backs down on the S-400s, Russia might not make a fuss about it. The latest showdown at NATO is yet another proof that Russia has no interest in a Turkey detached from the West. Turkey is valuable for Russia as long as it is part of NATO,” Sezer said. “Russia’s foreign policy does not involve antagonizing anyone. For Russia, Turkey is more important than Syria and the Kurds,” he added.

Still, some observers believe that Russia’s response to a fallout over the S-400s might take place in Syria. The argument goes that Russia has nothing more to gain on the ground from its partnership with Turkey. Under the current equilibrium with Turkey, Russia is struggling to overcome the deadlock in Idlib and reconcile the Kurds with Damascus. Hence, the main reason for Russia’s continued flexibility toward Turkey is the S-400 deal.

Journalist and foreign policy commentator Ceyda Karan agreed that the S-400 issue is interrelated with Turkey’s presence in Syria, but pointed out that Russia’s perspective transcends Syria. “Erdogan has skillfully played his trump cards vis-a-vis the United States and Russia — that’s a fact. He is now trying to defer the S-400 crisis as much as possible and work out a formula via NATO,” Karan told Al-Monitor. “For Russia, Turkey’s ‘worth’ has gone beyond Syria. A Turkey that insists on its own agenda within NATO is in Russia’s interest. There is now a Turkey that is throwing a spanner in [NATO’s] moves in the Baltics. If Turkey were to leave NATO, [Russian President Vladimir] Putin would be the first to object, I guess,” she said.

Erdogan’s frequent threats to unleash Syrian refugees into Europe are another card in play, keeping NATO’s European members under strain. Ankara is also trying to draw NATO’s attention to Turkey's safe-zone project in northern Syria, which involves the construction of mass housing to resettle refugees. Yet even if the Europeans show flexibility, the sanctions bills in the US Congress, where anti-Russian sentiments run strong, are not meant to stay on the shelf forever.