Turkey is impeding a military plan to defend Poland and the Baltics to force the alliance to support its military operation in Syria. The spat underscores political divisions that are shaking NATO ahead of its anniversary summit this week. 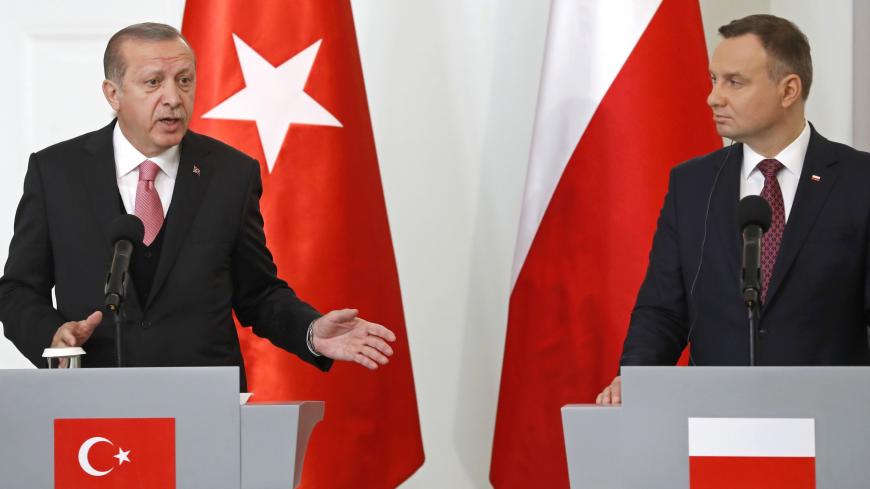 Even before NATO leaders gather in London to mark the alliance’s 70th anniversary Tuesday and Wednesday, Turkey has put a damper on celebrations.

In a sign of a growing divide between the alliance and its second-biggest military force, Turkey has balked at a defense plan for Poland and the Baltic states in order to register its anger over NATO’s refusal to meet Turkey's demands over its own defense. The move could stymie approval of the plans at the summit, to be attended by US President Donald Trump, Turkish President Recep Tayyip Erdogan and other heads of NATO states.

The dispute comes at a time when the transatlantic alliance is already badly bruised. Trump has emerged as its sharpest critic, accusing other members of being “delinquent,” hinting the United States might not defend allies under attack and even raising the possibility of withdrawal from the pact. Earlier this month, French President Emmanuel Macron said last month the lack of clear US leadership means NATO is suffering from “brain death.”

Turkey wants NATO to support its fight against the Syrian Kurdish People’s Protection Units (YPG), including designating the group a terrorist organization, before it signs off on plans to defend the alliance’s eastern flank against Russia. Turkey entered northeast Syria in October, forcing Trump to hastily evacuate troops who were battling the Islamic State (IS) alongside the Kurdish militia, without consulting European partners; this effectively turned over territory to Russia and the Syrian government.

Turkey can’t expect solidarity from NATO if it presents a “fait accompli of a military intervention which endangers operations against IS by the coalition, of which NATO is a member,” Macron said Thursday. Turkey has drawn the ire of other European countries for the invasion.

The acrimony reached full throttle Friday when Erdogan called Macron “very inexperienced” and told him to “check your own brain death first.” France in turn summoned the Turkish ambassador over the insults.

The discord within NATO has been a boon for its adversary Russia, which has been able to more easily challenge a divided Western bloc. For its part, Turkey has worked hard to fortify ties with Moscow. In addition to collaborating with Russia in Syria, Turkey defied NATO and the United States to buy Russia’s advanced S-400 antiaircraft missile system — designed to shoot down NATO aircraft. Officials in Ankara insist the acquisition doesn’t mean Turkey is distancing itself from the alliance and that it won’t integrate the missiles into NATO’s defenses.

The alliance’s military plans require backing from all 29 member states, and Turkey’s refusal to approve the plan for the east will hamper efforts to strengthen the periphery. Sources at the alliance told Reuters that Turkey is holding Poland, Lithuania, Latvia and Estonia “hostage” to force concessions. Lithuanian Foreign Minister Linas Linkevicius told the Financial Times that the row with Turkey is “not strengthening our alliance” and expressed concern about whether “we will really be able to remain the strongest alliance in history.”

His Turkish counterpart, Mevlut Cavusoglu, said Turkey has no quarrel with the Baltics and Poland, which sought the plan after Russia annexed Crimea from Ukraine in 2014, stoking fears about the integrity of their own borders, once under Soviet dominion.

“NATO needs to act to address all of its allies’ concerns. If it addresses some members’ concerns and objects to others, then there isn’t unity within NATO,” Cavusoglu said Thursday. Turkey was negotiating with NATO Secretary-General Jens Stoltenberg on finding “a middle way,” Cavusoglu added.

NATO’s plans to respond to threats from the south and east had been approved by the North Atlantic Council, the alliance’s political governing body, but the southern military plan was then blocked by the United States over the wording on the YPG and the United States persuaded a few allies to its side.

“Turkey did not want to be subject to discrimination. It did not want its security concerns to be put on the back burner, while others’ were prioritized,” said Sinan Ulgen, a former Turkish diplomat who now chairs the Center for Economic and Foreign Policy Studies. “By threatening to block this, Turkey sought to escalate the matter to [find] a political resolution when its technical-level discussions undertaken with the United States did not resolve it.”

Turkey has long fumed over Washington’s support for the YPG, which has links with the armed Kurdistan Workers Party (PKK), whose members have waged a 35-year insurgency within Turkey at the cost of 40,000 lives. The United States labels the PKK a terrorist group, but has sought to draw a distinction between it and the YPG.

“America’s problem is that once you take a wrong step, it’s hard to correct it. … Even the smallest acceptance of [the YPG as a terror group] will put the administration into a serious legal situation at home,” Cavusoglu said.

The United States partnered with the militia in 2014 as IS bore down on Iraq and Syria and seized territory equivalent to the size of Bulgaria. Turkey had dragged its feet on joining the coalition to battle the jihadis, though it eventually opened its Incirlik air base to coalition jets a year later.

The fight against IS exhibits the changing nature of the alliance’s mission in the post-Cold War period as new threats take different forms and multiply, Ulgen told Al-Monitor. “Turkey is the most concrete example of this. It sees the PKK as the main threat, while France and the US prioritize IS and the Baltic nations prioritize Russia. With this geopolitical transformation, the threat perception has diversified, and NATO can no longer easily find consensus.”

Article 5 of NATO's governing treaty — that an attack on one is an attack on all — has made NATO history’s most successful defense organization; signs that this commitment is faltering would disable its strongest deterrent. “Damage to the bloc’s political cohesion could affect the credibility of Article 5. That would be a positive for Russia and the most damaging outcome for NATO,” Ulgen said.

Despite all of the handwringing about Turkey’s loyalties, some of NATO’s staunchest defenders are from the Turkish army’s ranks, even if their numbers shrank in the purge that followed a 2016 failed military coup against Erdogan. Defense Minister Hulusi Akar, who was Turkey’s top military commander until joining Erdogan’s Cabinet last year, reiterated Turkey’s adherence to the pact in an op-ed Friday.

“We observe a world around us with new challenges and shared security threats, and in that world, Turkey firmly believes that NATO is tremendously relevant and should be bolstered, ensuring it can function effectively and in a spirit of genuine alliance,” Akar wrote. “Turkey will not throw the baby out with bathwater.”