How Russia defends its Syrian air base from attacks

Russia has been using attacks on its air base in Khmeimim as a leverage in talks with Turkey over Idlib, but has also taken some practical steps to counter the assaults. 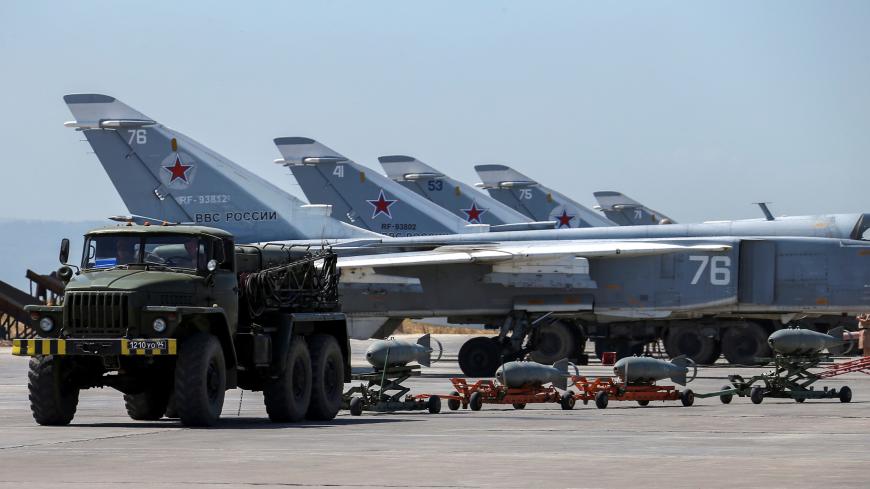 Since the bombing of the Russian military base in Khmeimim on New Year’s Day, the danger of an assault from the air became a routine one for Russian troops. Today, Russian military commanders are using the peril of drone attacks as a reason to start a military campaign in Idlib in the nearest future. It’s possible, however, that Russia's use of the information about the bombings is only an instrument to express its discontent with how Turkey is implementing the Sochi agreement.

Over the last two months, the Russian Defense Ministry has been reporting about damage from multiple launch rocket system missiles, and from drones launched by militants from the Idlib de-escalation zone in order to adjust targeting or to drop fragmentation ammunition. According to official statistics, Khmeimim was shelled five times in May and 12 times in April.

The Defense Ministry blames the assaults on groups affiliated with Hayat Tahrir al-Sham and frequently accuses them of violating the temporary cease-fire, which Hayat Tahrir al-Sham is not a party to, as no one officially negotiates with it in the first place. At the same time, the growing numbers of reports about attacks on Khmeimim correspond to an increasing intensity of action by the Syrian and Russian air forces in the area. It is often difficult to identify whether opposition militants or pro-Iranian groups break the cease-fire first to sabotage Russian-Turkish arrangements, as was the case in April when pro-regime forces and opposition groupings engaged in new round of violence.

Previous such attacks on Khmeimim were registered in August and September of 2018 when the Syrian air force was also operating quite dynamically in Idlib. Hayat Tahrir al-Sham militants published footage of preparations for the drone attacks, which they viewed as the most available way to retaliate for the actions of Syrian and Russian forces. At the same time, when Hayat Tahrir al-Sham was accused of attacks by the Russians, it dismissed the idea.

Official sources said air defense systems on standby successfully engage any attacks on the air base. Many Russian military experts believe this defense was made possible only after the assaults conducted on New Year’s Day that damaged some fighter aircraft; the attacks were then analyzed and measures were adopted. It should be noted that information about any type of attack on the military facility gets filtered by counterintelligence services because of the implications for the security of the air base.

Another wake-up call for the Russian military came after Islamic State drone assaults on international coalition troops in Mosul in early 2018. Following the attacks, the Khmeimim air base was upgraded to counter similar attacks. The facility was surrounded by systems to jam GPS and GLONASS communications, radars were adjusted to detect smaller targets and caponiers were built to protect airplanes.

“It seems that back in the wintertime, the Russian commanders were, as the saying goes, 'waiting for the flood to start building their ark.' They most likely knew about some attacks that radicals had been launching on other targets in Syria and Iraq but underestimated the danger for their own base nonetheless,” said Denis Fedutinov, a Russian expert on unmanned aerial vehicle (UAV) technology.

“Since that time, the Khmeimim base has been attacked regularly. The opposing side uses various tactical techniques, equipment and weapons to find the weak spot in the facility’s defense system. For instance, as a means of distraction the Islamists use drones for surveillance and fire adjustment, as well as for carrying ammunition, both made for dropping and integrated into the mechanism. Other types of weaponry are also used in various combinations,” he told Al-Monitor.

Thus, it is not surprising that the drones became a factor been blamed for breaking agreements and used as a proof of a third party’s hostile actions. Initially, the Defense Ministry claimed the UAVs had been equipped with up-to-date foreign software disguised as locally crafted operating systems. In October 2018, Russian officials accused the Pentagon of coordinating the radicals’ drones through P-8 Poseidons, a US military surveillance aircraft, aiming to discover how the air defense systems of Khmeimim were functioning.

Experts were generally skeptical about these statements, considering that the ministry had not disclosed any specific details of the machines’ avionics. Maxim Shinkevich, director of Finko LLC, a drone-producing company, told RBC media agency that the UAV had been built with parts and software that cost only about $1,500.

Ilya Lipin, a UAV development engineer, analyzed in his blog the photos of the drone provided by the Defense Ministry and concluded that the machines may have been controlled by a basic, commonly available flight controller such as ArduPilot or the like. He said that in this situation, if the GPS/GLONASS receiver fails, a drone either begins to move in circles, maintaining altitude, or enters a straight-line flight mode, constantly descending under the weight of 60mm fragmentation bombs it carries.

After the statements about possible involvement of Western air forces, the main topic of debate was the existence of communication channels through which every particular drone had been controlled under the condition of radio-electronic signal jamming. While Fedutinov said such a tactical scenario was hypothetically possible, it did not seem likely for technical, military and political reasons.

He said, “Using Poseidon-8 to coordinate a group of drones is difficult due to several reasons such as the high cost of a communication channel that allows for control of the UAV from an aircraft; the possibility of disclosing the drones and the mechanism itself through the radio exchange between the UAV and the aircraft; vulnerability of the control channel to the radar electronic jamming systems; and, last but not least, the inevitable military and political consequences.”

He said, “The simplest scenario is to use UAVs equipped with basic, commercially accessible control systems based on satellite navigation.”

Recently, the theory that Americans were targeting Khmeimim gave way to speculation about Turkish involvement. While the Russian military administration regularly makes official statements about attacks on Hayat Tahrir al-Sham's drone stocks carried out in cooperation with the Turkish army, the media frequently blames Turkey for attacks on Khmeimim carried out under the false flag of terrorist groups. All of this comes against the background of speculation in the Russian-language segment of social media that claims the existence of “agreements” on drone prohibition that Russia and Turkey allegedly reached in late May in exchange for a temporary cease-fire in Idlib.

However, there are no publicly known arrangements between Russia and Turkey on this issue. Still, these seeming controversies may just be a ploy for a Russia-led offensive on Idlib. On the one hand, after Russia-Turkey talks on the opening of strategic Damascus-Aleppo and Latakia-Aleppo highways failed, and Syrian troops continued operations in the demilitarized zone, Ankara charged Assad’s regime with “sabotaging Russian-Turkish cooperation in Idlib.” Turkey started to move the groups from northern Aleppo to Idlib and reinforced the observation posts. On the other hand, all of the military action in which Russians have participated has not yet spread beyond the demilitarized zone, and the Turkish posts still manage to a certain degree to limit the scale of the regime’s operations. The demilitarized zone is a 10-kilometer-wide (6-mile) zone that, under the Sochi agreements, separates the Syrian army and the opposition groups.

However, it is still possible that Russia aims to test both Ankara’s determination to uphold its positions in Idlib and the opposition’s fighting abilities. Saying that the Syrian army seeks, among other goals, to suppress al-Qaeda-affiliated radicals to deter them from using Latakia highlands as a drone-launching site may be used as a talking point in negotiations with Turkey when it comes to explaining the army's actions to Ankara. In reality, however, this has little operational meaning: Opposition militants may launch UAVs from areas adjacent to Turkish territory, where, even just using common commercial software, the drones can reach the Russian base.