Turkey once again finds itself in the middle in the Syrian crisis, trying to reassure the opposition groups it supports while keeping Russia happy. 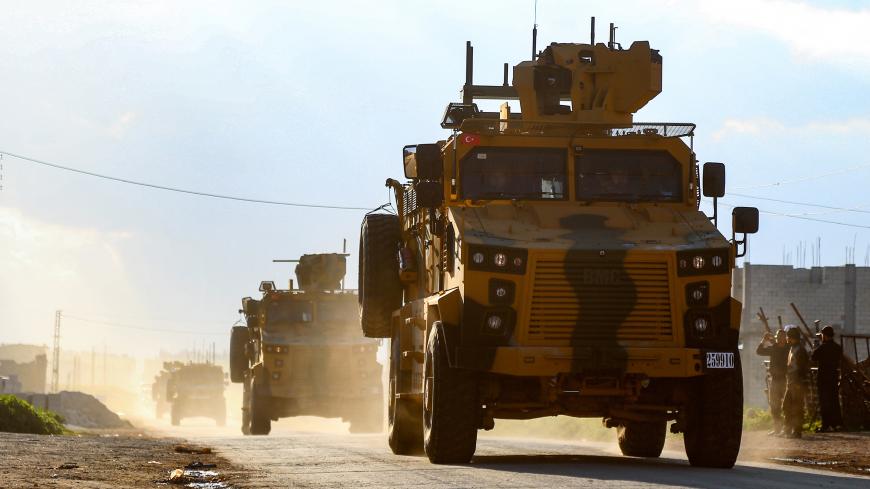 A column of armored Turkish military vehicles drives along a road in the demilitarized zone in the northwestern town of Khan Sheikhun, Syria, March 17, 2019. - -/AFP/Getty Images

Turkey, which is badly pressed to fulfill the commitments it made to Russia during the Sochi negotiations on Syria, and to the local opposition to the Syrian regime, which it promised to protect at Idlib, is now trying to find a way to extricate itself from being stuck between Russia and the Syrian rebels.

When Turkey’s campaign to create a buffer zone east of the Euphrates River did not work out, Russia succeeded in dragging Turkey back to the Idlib agenda. On March 3-4, Russia and Turkey signed a new accord to follow up on the issues discussed during the Iran, Russia and Turkey summit Feb. 14 in Sochi.

The new text introduced some interesting points. On March 8, Russian forces patrolled on one side of the buffer boundary as Turkish troops patrolled the other.

Turkish troops accompanied by militants of the Muslim Brotherhood-associated Failaq al-Sham patrolled at Kfar Lusin and Dana, north of Idlib; Atarib, west of Aleppo; and Kammari, Karater and Al Iss, southwest of Aleppo. When Turkish troops were deployed south of Aleppo to work on reopening the Aleppo-Damascus highway, it attracted attention. Of course, one swift move was not enough to open the road. Russia reported that the air base in Khmeimim, Syria, where its aerial assets are stationed, was attacked by drones and said it counterattacked the arms arsenals of Hayat Tahrir al-Sham (HTS) on March 13 in coordination with Turkey. Turkish military sources, however, denied any collaboration.

The alleged green light by Turkey upset the local pro-Turkey opposition as well as supporters of the Syria revolution in Turkey. A joint communique issued by 67 organizations in Syria called on Russia and Turkey to respect the cease-fire. It said 90 civilians were killed and 300 were wounded last month alone, and asked for support for a political solution based on UN Security Council Resolution 2254.

The steps Russia has taken so far show that Turkey probably will not be able to avoid fulfilling its commitments, but the situation also raises the question of whether Turkey is actually subscribing to the Russian operational plan that will put Idlib under the control of the Syrian regime army.

The accord signed Sept. 17 in Sochi tasked Turkey with an impossible mission: establish a demilitarized zone of 15-20 kilometers (10-13 miles) to separate regime forces from armed groups; force all radical terrorist groups to withdraw from the demilitarized zone by Oct. 15; have all heavy weapons such as tanks, multiple-rocket launchers, artillery and mortars removed from the area; and secure and open the M4 Aleppo-Latakia and M5 Aleppo-Hama highways.

Although Turkey managed to get some heavy weapons removed from the demilitarized zone to save face, other conditions weren't implemented. To the contrary, HTS was able to crush the Turkey-supported groups. This is why the partners in the Astana peace process, which were hoping to eliminate HTS as a terror organization, ended up watching HTS take control of 90% of Idlib and sideline Turkey in early January. Russia kept up some pressure with facile statements that “Turkey is working on it, but the accord has not been fully implemented.” Nevertheless, Russia opted not to disrupt its ties with Ankara for a variety of reasons.

Meanwhile, Turkey was engaged in efforts to get HTS removed from the terror organization list and link it to the National Liberation Front (NLF), a coalition Turkey had formed in May. Toward that end, a meeting called the Syrian Revolution General Conference was organized Feb. 11 in Idlib to replace the Syrian Salvation Government with a new civilian administration. The conference also heard proposals to form an executive council and a joint command center to unite military wings. No action was taken on the proposals.

A meeting scheduled for March 14 in Hatay, Turkey, was scrapped at the last moment, but would have brought together the Free Syrian Army, which was trained and equipped by Turkey; the Syrian High Negotiations Committee, which represented the opposition at Astana; the National Coalition for Syrian Revolutionary and Opposition Forces; and the Syrian Islamic Council. This meeting was supposed to ensure unity between the Syrian Interim Government working under Turkey’s support and the Syrian Salvation Government. Such efforts are likely to continue. Also at the February meeting, a proposal for a military coordination body bringing together groups such as HTS and Tanzim Huras al-Din (an HTS offshoot) with NLF units was debated. The intention was that with a joint structure it would be easier to minimize attacks from Idlib on Russian and Syrian regime units, and enable Turkey to boast that terror organizations had been eliminated and so the cease-fire should be preserved until a political solution is reached.

But there are no guarantees these objectives can be achieved under current conditions, with the groups ignoring the Sochi accord and attacking the regime forces at Hama, Latakia and rural Aleppo. Even the groups supposedly under Turkey’s tutelage have discarded the de-escalation efforts. For example, on March 9, the group that attacked the regime position in the Christian village of Sukaylabiye was Jaish al-Ahrar, a part of the Turkey-backed NLF. That attack took place only one day after Turkey initiated its patrolling operation.

As tension mounts around Idlib, leaders of armed groups are threatening to escalate the situation with guerrilla tactics.

All these complex schemes have generated a debate among the opposition groups over whether the Astana peace process for Syria has collapsed.

Although the optimism that Astana would forever guarantee that Turkey would remain a shield for the opposition has been dissipating, nobody is yet ready to declare the death of the Astana process, as Turkey and Russia continue joint operations in the field. Moreover, it is too early still to conclude that the Syrian regime and Russia are about to launch their long-discussed combined sweeping military operations against the enemies of Syrian President Bashar al-Assad.

Preservation of the status quo at Idlib seems essential to the future of Russian-Turkish relations. If Turkey were to give the go-ahead for a Russia-Syria sweep, the entire gamut of relations Turkey has formed with opposition groups would be threatened. If Turkey withdraws, the opposition groups that Ankara currently supports could see it as a betrayal, and might target Turkey.

Also, the US reaction to such an operation should not be overlooked just because Washington has said it plans to withdraw from Syria.

To summarize the latest situation in Idlib: Although unwillingly adhering to Russia's operations plan, Turkey still hopes HTS will be freed from the terrorist label, so a new "terror-free" structure can take over control of Idlib and preserve the status quo until a political solution is reached. Russia still hopes Turkey will contribute to the Syrian regime's takeover of the region. Russia is paying much attention to keeping Turkey on its side while trying to sort out the Idlib mess.