When Qatari women miscarry, they have to deal with their grief and psychological scars on their own, often accepting their misfortune as "God's will." 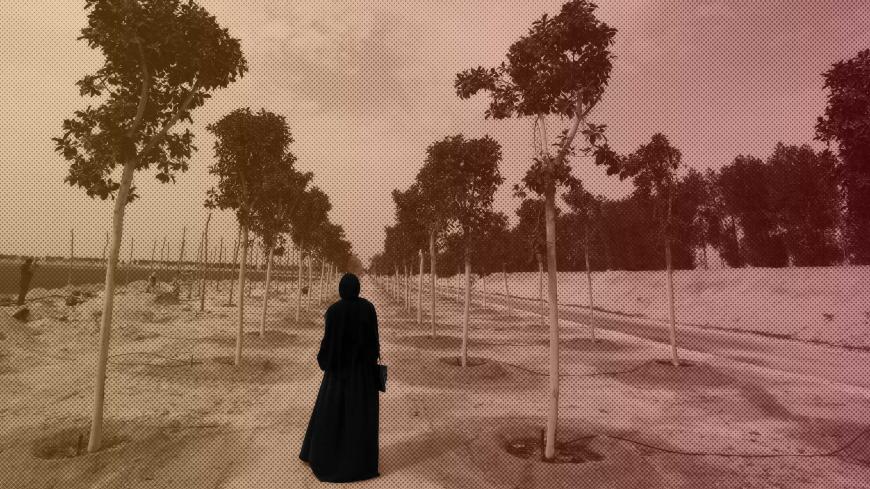 A woman walks among trees at the Supreme Committee for Delivery and Legacy Tree Nursery in Doha, Qatar, Feb. 22, 2018. - KARIM JAAFAR/AFP/Getty Images

Eman al-Hammadi was excited to start a family, but her three consecutive pregnancies ended in miscarriages. She attributes the tragedies to "al-ayn" — the evil eye — which is an Islamic belief that misfortune is transmitted from one person to another out of jealousy or envy.

“Even though I [was not particularly superstitious], I slowly started believing in the evil eye after I had my second miscarriage,” Hammadi, a 24-year-old Qatari student, told Al-Monitor.

Many Qatari women ascribe miscarriages to supernatural forces such as jinns (evil spirits), the evil eye or simply the “will of God.” In 2017, 60 Qatari women, 20 pregnant and 40 who had miscarried in the last six months, and their families were interviewed on how they felt about the miscarriages in light of their religion and culture. The report was published by BMC Public Health, a research platform, and written by researchers from University College London, Hamad Medical Corporation and Weill Cornell Medical College Qatar.

The study showed that 85% of the participants had experienced between one and three miscarriages.

At least one in four pregnancies end in miscarriage around the world. But as women in the Arab Gulf countries are encouraged to have many children, they experience multiple pregnancies, often one right after the other. These women are at risk of multiple losses, which they and their families are more likely to see as the will of God, rather than as a result of health or medical reasons.

“The religious factor is very strong here, so patients deal with any bad news through their beliefs,” Dr. Mona Mohamed, a family planning physician at Gharrafat al-Rayyan Health Center, told Al-Monitor. “When I practiced in the United Kingdom, the mother or father would ask if they could have done anything different. But here they don’t really look for a medical answer — they turn to religion.”

Common causes of miscarriage include age, a weakened immune system and inter-family marriages that result in chromosomal abnormalities. According to a 2009 study published by the Asian Pacific Journal of Cancer Prevention, 54% of marriages is between cousins in Qatar, the highest of all Gulf nations.

Only one respondent of the 2017 study named inter-family marriage as a possible explanation for her miscarriage.

With Qatari nationals comprising only about 12% of the country’s 2.6 million population, choices of “socially acceptable” spouses of the same nationality, religion and status, even those unrelated, are limited, the report said. It added that many Arabs consider inter-family marriages religiously acceptable according to interpretations of the Quran and hadiths.

“Many couples do not understand these medical facts,” Dr. Mandy Abushama, who works at Feto Maternal Medical Center, told Al-Monitor. She also said that many of her patients were not aware of how common miscarriages are, especially in the first trimester. “It’s like breastfeeding; nobody speaks about miscarriages although they are so natural.”

The report’s lead author, Susie Kilshaw, a medical anthropologist at University College London, told Al-Monitor, “While miscarriage is incredibly common, the fact that it was taboo meant that I did not know others who had miscarried, which led me to feel isolated and anxious that there was something wrong with me.” Kilshaw herself had a miscarriage before working on the report.

The report found that, among the women interviewed, 33% believed the evil eye had something to do with the miscarriage. Many also believe that the evil eye can be deflected by "ruqyah," a preventive spiritual healing conducted by regular recitations of the Quran.

Many Qatari women will not announce their pregnancies until they feel spiritually secure. “I made sure to announce my pregnancy after three months. I had to make sure my baby was safe before telling family members,” Fatima Ibrahim, a 22-year-old Qatari student who has a 9-month-old daughter, told Al-Monitor.

Abushama also advises couples to refrain from telling their family and friends about a pregnancy until 12 weeks have passed. “It’s for the simple reason that the trauma is multiplied when there is pressure from the family to procreate and your mother-in-law is blaming you,” she said.

Most of the study’s participants cited the Islamic conviction that God’s will ended their pregnancies. “After the shock that there is no longer a fetal heart rate, they make sense of it by saying that it was Allah's will," said Mohamed.

The study highlights the extent of people's faith, and the role Islam plays in Qatari society dealing with miscarriages. In fact, the authors wrote that miscarriages are considered shameful and taboo, and that the experience causes psychological distress for women.

“The psychological aspect here is ignored. You learn to cope mentally by yourself, and you don’t know if it is better or worse if you cope with the sadness alone,” Fatima Hamad, a 26-year-old Qatari student, told Al-Monitor in tears.

Clinical experts referenced in the study emphasize that religious coping mechanisms and cultural frameworks are imperative for improving health-care practices. “Medical institutions are very agnostic,” said Abdulaziz Sachedina, an Islamic studies and biomedical ethics professor at George Mason University in the United States. “They [medical personnel] don’t have any religious or cultural training even though that is a large part of understanding patients.”

Abushama agrees saying that fertility clinics in Qatar could be more sensitive by providing parent grieving rooms. “The best coping mechanism for a grieving couple is understanding that miscarriages are natural,” she said. “All societies find comfort in superstitions, but there is more consolation in factual knowledge.”