Experts speculate on causes of rising birth defects in Gaza

Birth defects have increased in the Gaza Strip, which raises questions about what the reasons might be. 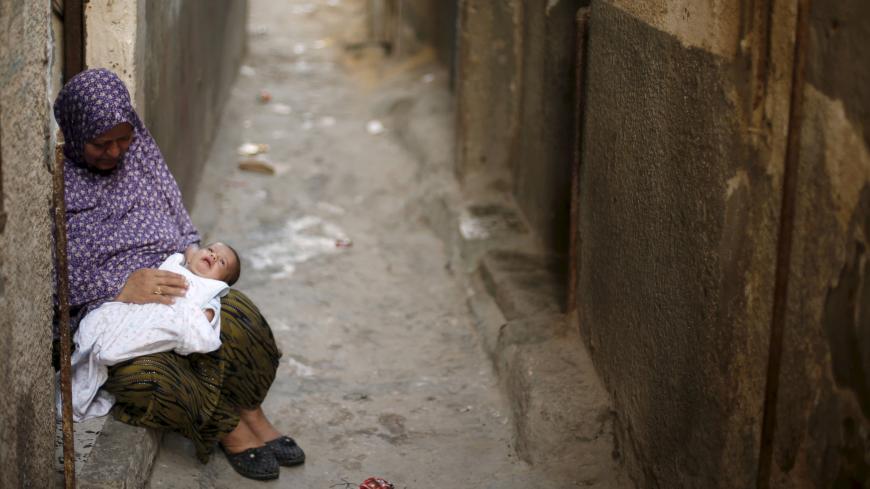 A Palestinian woman holds her grandchild as she sits at the entrance of her house in Shati refugee camp, Gaza City, Gaza Strip, Sept. 15, 2015. - REUTERS/Mohammed Salem

GAZA CITY, Gaza Strip — During an ablative brain surgery Feb. 18 at Al-Shifa Hospital in Gaza City, neurosurgeon Mahmoud Abu Khater succeeded in removing an extra brain growth outside the head of 4-month-old Mayce Eid. He reconstructed her brain in a unique surgery.

The Ministry of Health covered the cost of the surgery. Mayce’s father, Shaker Sheikh Eid, had urged government authorities to step in to save his daughter’s life. Several hospitals in the Gaza Strip, such as the European Gaza Hospital in Khan Yunis, and Al-Makassed Hospital in East Jerusalem had refused to perform the risky operation and transferred the case to other hospitals in Gaza and the West Bank.

Abu Khater told Al-Monitor, “Mayce had a critical condition. Part of her brain was outside her skull and connected to the part of the brain inside the skull.”

Eid said that the family learned about the deformity during the seventh month of pregnancy after several tests. The doctors lost hope of finding a solution to the devastated family’s crisis. Some said the child would die during birth or after only a few days. The father said that, as per Sharia, the fetus could not be aborted.

However, the family’s tough economic situation and Israeli restrictions in granting permits prevented them from traveling outside the Palestinian territories to choose a more specialized clinic.

Mayce’s parents are related to each other, but Abu Khater said it's difficult to pin down the reason for Mayce's deformity. He added, “There are no [current] scientific studies pointing at the causes of fetal deformation [specifically] in the Gaza Strip." However, Abu Khater believes they can be attributed at least in part to Israeli weapons used in the recent wars and the inter-family marriages that are prevalent in Gaza.

Gaza Health Ministry spokesman Ashraf al-Qudra also told Al-Monitor there have been no studies on the reasons behind fetal deformities or their numbers in the past few years.

However, in 2014, a medical research team from Italy published a small-sample study about fetal deformities in Gazan newborns (born in 2011) in the International Journal of Environmental Research and Public Health. The results indicated deformity cases were linked to Israeli weapons used in wars on Gaza. Teratogens — agents that can cause birth defects such as chemicals, radiation, drugs or maternal infections — from white phosphorus used in Israeli wars in Gaza were found in the hair of newborns with congenital defects or premature birth. The study also documented that parents were at risk during these wars.

Tharwat ElHelou, director of Al Helou International Hospital in Gaza City, told Al-Monitor, “It is only normal that deformation cases multiply in the wake of rampant wars in the world. In Gaza, fetal deformations, abortions and sperm abnormalities are spreading due to drug addiction and the unhealthy environment women live in.”

In addition to deformation cases, the number of conjoined twins is increasing. In January, Gazan conjoined twins Hanin and Farah Ghanem, who were born in October 2017, arrived in Saudi Arabia Dec. 23, after the kingdom had responded to Al-Shifa Hospital’s humanitarian call to save their lives. Hanin survived, but her sister, who had other congenital anomalies, did not.

Transferring the twins from Gaza to Saudi Arabia took around 45 days. The uncle of the twins told Al-Monitor, “The Gaza Strip lacked medical capacities to separate the twins. We made efforts to move them abroad for the surgery and to get an Israeli permit, in coordination with UNICEF.”

Allam Abu Hamda, head of the neonatal unit at Al-Shifa Hospital, told Al-Monitor, “In the past few years the cases of fetal deformation have increased, including [conjoined] twin births."

Abu Hamda said the Gaza Strip lacks the necessary capacities to treat newborns who suffer from deformities that call for specialized doctors, such as cleft lips and cleft palates, hand and foot deformities, hernias, and deformities of the heart and brain.

In the absence of medical research, the exact reason for fetal deformities remains a mystery to medical professionals in Gaza, amid social reasons related to kin marriages, the unhealthy environment in Gaza, drug addiction and the effects of Israeli weapons used during Israeli military operations. Awareness campaigns are also scarce.