Some of Gaza’s injured are receiving medical attention in the West Bank, but Israeli restrictions are making it difficult to get more of the wounded across. 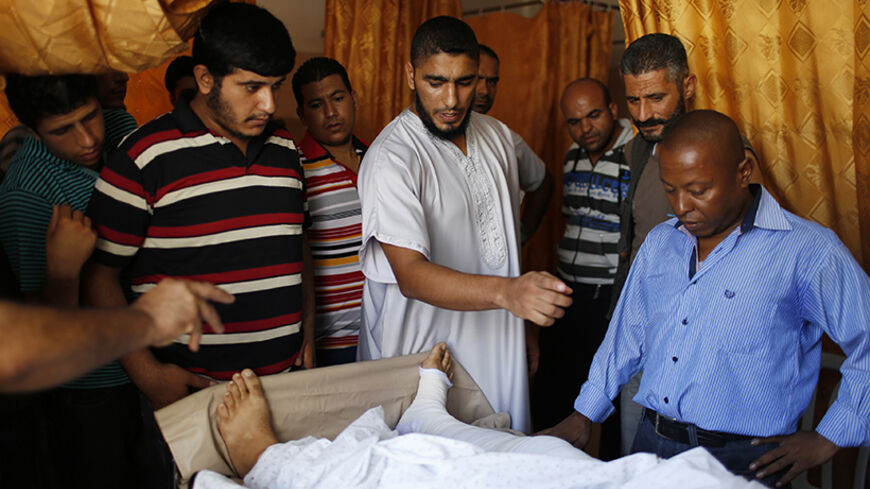 NABLUS, West Bank — After Mahmoud al-Masri, 15, was injured, he met his brother for the first time in his life, while their mother was waiting for them in the Gaza Strip. He arrived in Nablus to get treated after the family home in Khan Yunis was bombed during the recent Israeli aggression. He underwent several surgeries after suffering a fractured foot, with cuts in his tendons and arteries.

Masri was relieved when he arrived to Nablus for treatment since it was a chance to meet his brother. “I was supposed to go to Al-Makassed Islamic Charitable Society Hospital in Jerusalem, but I was transferred to Nablus," he said. "I remembered that my brother lives there. I have never seen him in my life before, because he is banned from entering Gaza. I spoke with him on the phone before I reached Nablus. The joy of seeing him made me forget the pain I was feeling. We cried in front of people.”

A source from the Ministry of Health in Ramallah said on condition of anonymity, “The wounded are brought from the Gaza Strip via the Ministry of Health in Ramallah, after the hospitals in Gaza select the names and the cases [to be moved to the West Bank].” The source told Al-Monitor, “The cases [selected] are in urgent need of surgeries and immediate treatment that are not available in Gaza because of a lack of doctor teams, equipment and medical devices. The ministry then coordinates for the transport of patients out of the Strip.”

Twenty-five wounded people of all ages are being treated at the An-Najah National University Hospital in Nablus. Hospital spokesman Hassan Qamhiyah told Al-Monitor that seven of the 25 are children, and four are in the intensive care unit. According to Qamhiyah, all the injured have undergone at least four surgeries, depending on the nature of the injury and degree of deformity.

Samia Mahmoud Rihan, 8, who's from Gaza, sat quietly on her bed surrounded by gifts and toys, recovering from abdominal surgery. Shrapnel hit her abdomen, which required her to undergo surgery at the Kamal Adwan Hospital in Gaza, before she was transferred to Nablus for treatment.

Al-Monitor asked Rihan, whose uncle is staying with her during recovery, “Which city is more beautiful, Gaza [City] or Nablus?” She replied, “I couldn't see Nablus because of my injury.” The girl's family took refuge at her aunt’s home in Gaza City, after they had to evacuate their own home that was at risk of getting bombed. But the Israelis bombed her aunt’s area, too.

“We were having breakfast, and the house of my my aunt’s neighbor was shelled. I had an injury to the stomach, shrapnel hit my aunt, and mom and dad suffered minor injuries,” Rihan recounted.

On a daily basis, dozens of citizens from the various Palestinian cities come to the hospital to visit the wounded, and lend them a helping hand, financially and morally.

While sitting in one of the children’s rooms, university student Huda Harzallah said, “We come here to stand by their side and support the wounded people of Gaza. We are not doing much, but the least we can do is visit them and help them as much as possible.”

Sharing a room with Rihan and accompanied by her maternal grandmother, Inas Abu Zeid, 5, from Rafah, can’t stop crying. Her parents were injured and are in Egypt for treatment.

Before Zeid was injured following the shelling of her house in the early hours of July 28, the first day of Eid al-Fitr, she was dreaming of gifts and the holiday. Her pain outweighs the joys of having received gifts at the hospital.

Her grandmother told Al-Monitor: “She was with her parents when the building was bombed, which forced them to move to another apartment of the family. While the mother was breastfeeding her one-month-old baby, the house was hit by a rocket, which caused the baby to be cut into pieces, and killed seven and injured other family members.”

According to her grandmother, Zeid sustained a bone fracture, and will need a long time to recover, while the risk of disability remains. "She will have to undergo a number of surgeries.”

Aysara al-Batch from the Shajaiya neighborhood witnessed the heaviest artillery bombardment by the Israelis, yet seems to have the trademark determination of Gazan women. Batch, who survived several massacres in Shajaiya — one of which targeted the Batch family — told Al-Monitor that she was planting roses in the courtyard of the house before an explosion. “Suddenly, I saw my hands bleeding and my leg injured," she said. "At that moment, I did not realize what was going on. All I could see was young men trying to rescue me. I had injuries to my hands and I had surgery in Gaza before arriving in Nablus.” Batch explained that the artery of her hand was cut, her elbows damaged and her leg’s tendons and arteries torn.

“My husband was inside the house and was injured by shrapnel in the chest and leg,” she said, adding: “We are still at the University Hospital of an-Najah.”

Weeam Astal, 9, who's also at An-Najah National University Hospital, suffered serious injuries that will necessitate prosthetics. As she was playing with her cousins, a rocket was fired toward her by an unmanned drone, cutting off her left leg and fracturing her right leg.

Her aunt described the details of the attack to Al-Monitor, saying, “According to doctors, Weeam will need new artificial limbs on an annual basis, since she is still a child and her body is still developing.”

Transporting the wounded from Gaza to the West Bank was no easy task, given the restrictions imposed by Israeli authorities.

The source at the Ministry of Health confirmed that Israel is impeding the movement of the wounded from the Gaza Strip, and is stalling to give out exit permits. In some cases, it even sends back some patients, while controlling and stalling the permits, and refusing the exit of patients.

According to Najjar, the ministry seeks to transfer 300 wounded from Gaza into the West Bank and Jordan, including 160 seriously injured patients requiring urgent medical attention, but Israel is impeding this transfer by preventing ambulances from entering the Gaza Strip from the West Bank.