The Palestinian Health Ministry in Ramallah decided to halt the transfer of patients from the West Bank to Israeli hospitals — an expense the PA covers — after Israel slashed the PA's budget amid rising tensions. 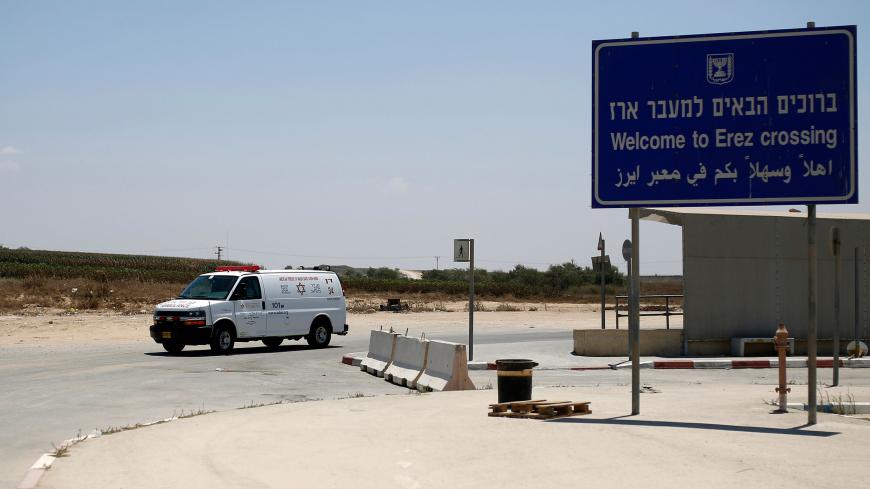 GAZA CITY, Gaza Strip — The Palestinian Ministry of Health in Ramallah announced on March 26 the halting of medical transfers to Israeli hospitals and vowed to find alternatives for Palestinian patients in private and government hospitals.

The Ministry of Health's decision comes as part of escalatory steps being taken to protest Israeli measures. The boycott between the Palestinian Authority (PA) and Israel worsened after the PA refused Feb. 27 to accept the tax revenues that Israel collects on its behalf to protest Israel’s Feb. 17 decision to slash 502 million shekels ($138 million) yearly in PA tax revenues, which is the amount the PA paid out in 2018 in stipends to detainees, those injured in attacks or violence, or families of those killed.

Palestinian news agency Wafa cited Ministry of Health spokesperson Osama al-Najjar as saying March 26 that the bill of medical transfers to Israeli hospitals, which the Palestinian Ministry of Health has to pay, is estimated at $100 million per year — or 22% of the annual budget of the ministry — according to the Civil Society Team for Enhancing Public Budget Transparency.

Israeli hospitals send Palestinian patients' bills to the Ministry of Health, an amount that would be deducted from the tax revenues that Israel transfers monthly to the PA.

According to the annual medical report published by the Ministry of Health in July 2017, medical transfers to Israel added up to 16,269 cases. They constitute 17% of the total number of transfers abroad, counting 12,121 cases from the West Bank and 4,148 cases from the Gaza Strip, at a total cost of 193 million shekels ($53 million) per year — or 32% of the total cost of treatment abroad.

Najjar mentioned, however, that the $100 million annual cost of medical referrals based on 2014 data from the ministry dropped to $53 million according to the 2017 report.

The Ministry of Health deals with treatment abroad based on 2006's Law No. 11. Palestinian patients in government hospitals in the West Bank and Gaza Strip are often referred abroad to receive services that are not available locally. After doctors in one of the government hospitals diagnose the case, the patient fills in the transfer paper, which the health practitioner, department chief and hospital director sign.

In October 2018, director general of the Medical Referral Department of the Health Ministry Amira al-Hindi revealed a political decision based on orders from Palestinian President Mahmoud Abbas to give Jerusalem hospitals that were affiliated with the PA priority in medical transfers to strengthen them, then move to community and private hospitals inside Palestinian territories.

Undersecretary of the Ministry of Health Assad Ramlawi told Al-Monitor, “The decision of the ministry to halt medical referrals carries political significance. It was a response to Israel’s decision to withhold tax revenues, but it also coincides with the ministry’s five-year plan [2017-2022] to localize health services and rely on Palestinian hospitals rather than ones abroad for treatment. The ministry also devised a plan to limit departments Palestinian patients resort to in Israeli hospitals to the departments of oncology, ophthalmology, neurosurgery, vascular surgery, children’s cardiac surgery and kidney transplant.”

He added, “We have highly competent medical staff, and 25% of Palestinian doctors work in Israeli, Arab and European hospitals. We relied on the strategy we launched to lure many of them in through financial incentives and private contracts that set them apart from current doctors and to benefit from their wide experience. We also sent 50 doctors to train abroad in European and Gulf countries to gain new expertise that would allow them to offer high-level and competent services like the ones in Israeli hospitals.”

Ramlawi added, “At the ministry, we devised a plan to deal with the halt of transfer of patients to Israeli hospitals by resorting to a liver transplant protocol signed between the ministry and its Turkish counterpart, and another protocol for lung and heart transplants with India. One of the motives that pushed us toward this decision was Israel’s deprivation of a wide group of patients in Gaza of treatment in the West Bank or Jerusalem hospitals due to their political affiliation and the blockade.”

Najjar said, “Israel is manipulating the issue of medical transfers and adding figures to the treatment bills that do not mirror the real cost, then carrying the bills to the Ministry of Health. Israel is also adding the treatment bill to the ministry’s expenses when offering treatment to a wounded Palestinian, whether due to a car accident or injury at work within its borders.”

Rish said the Ministry of Health's plan to localize medical treatment could allow Gaza patients to receive treatment in private hospitals in the West Bank and Jerusalem instead of seeking treatment in Israel, which imposes restrictions on Gaza patients.

Some Palestinian patients, however, were concerned the decision could prove disastrous for their medical treatment.

Said Awad, a 38-year-old from Gaza City, suffers from leukemia and relies on Israeli hospitals for treatment. “I discovered I have leukemia three years ago, and I am currently receiving treatment at the Assuta Hospital in Israel. The ministry’s decision could have a negative impact for me, as the treatment I am receiving is not available in the hospitals affiliated with the Palestinian Ministry of Health," he told Al-Monitor.

For her part, Souad — a 25-year-old from Hebron who asked to be identified only by her first name — told Al-Monitor, “I am currently undergoing treatment at the Hadassah University Hospital in Ein Karam based on a medical transfer from the Palestinian Ministry of Health. I was shot in the eye by the Israeli army six months ago, after which I was diagnosed with [damage to the retina of the eyes]. I was scheduled to have surgery in May. So the ministry’s decision to halt medical transfers will prevent me from having the surgery inside Israel.”

Legal researcher at the Social and Economic Policies Monitor (a civil organization based in Ramallah) Iyad al-Riyahi told Al-Monitor, “The Ministry of Health in Ramallah must determine the fate of patients who are [currently] receiving health care in Israeli hospitals. The decision should not apply to them before [2006's Law No. 11] ends to avoid health complications. If the decision is politically motivated to respond to Israel’s slashing of tax revenues, the ministry should sever ties completely.”