To pressure Hamas, PA now sticking it to the sick

The health of thousands of sick Palestinians in Gaza is in jeopardy as the Palestinian Authority cuts off medical supplies. 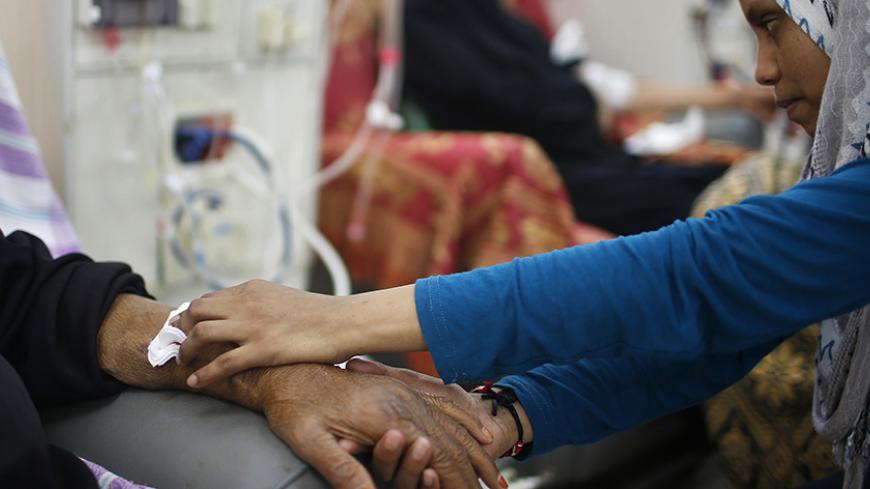 A Palestinian woman tends to her mother who is undergoing kidney dialysis at al-Shifa hospital in Gaza City, Gaza, Sept. 12, 2013. - REUTERS/Suhaib Salem

GAZA CITY, Gaza Strip — A massive health crisis is looming in the Gaza Strip, as the Palestinian Authority (PA) in the West Bank has halted shipments of essential medicine, baby formula for sick children and medical supplies.

The Ministry of Health in the national consensus government in Ramallah notified its counterpart in Gaza that it was stopping the shipments May 8. The medication and medical equipment/supply shortage has reached a critical stage, as more than 170 drugs out of the 500 essential ones have run out.

The decision to ban medical supplies to Gaza is part of the PA's most recent measures to tighten the noose on Hamas, which has controlled the Gaza Strip since 2007 and is at odds with PA President Mahmoud Abbas and his Fatah party. The PA administers the West Bank. Other already-imposed measures have affected employees' salaries and cut off Gaza's power and water supplies.

Munir al-Barsh, general director of the Health Ministry’s pharmaceutical department in the Gaza Strip, told Al-Monitor, “The consensus government … is responsible for supplying medication and medical and health supplies worth $40 million yearly to the Gaza Strip. The supplies are distributed to sick people for free, and those [people] benefit from the Palestinian medical insurance and receive treatment in hospitals and clinics affiliated with the ministry.”

He said the West Bank ministry is using "the pretext that [the supplies] aren’t available in their warehouses in Ramallah."

"But we contacted companies that supply medication to the Health Ministry, and they told us that it is possible to supply Gaza. This reveals the intention to stir a health crisis in the Gaza Strip," he noted.

Already, about 31% of the essential medicines are completely depleted from the Gaza ministry warehouses, Barsh said, and another 30% might run out within weeks, "thus foreshadowing a possible humanitarian crisis in the Gaza Strip.”

He noted that the Ministry of Health in Ramallah is required to supply the essential medications, as determined by specialized committees and recommendations from the World Health Organization (WHO). Much of the medication and supplies being held up by Ramallah are designated for Gaza by donor countries and WHO.

The drug supplies that have been exhausted are needed for kidney transplants and the treatment of cancer and blood disorders such as thalassemia and hemophilia. Many supplies used in emergency rooms and surgery have also run out.

More than 90% of cancer patients have not received treatment since May 8, Barsh said. The lack of cancer medication will force patients to seek treatment abroad, meaning they will have to get through Israeli crossings to reach Jordanian, Egyptian or West Bank hospitals.

“The Gaza Health Ministry notified international organizations on May 18 about the dangers of halting treatment in Gaza," he said.

Even if the Gaza Health Ministry had money in its treasury to pay for the supplies — which it doesn't, Barsh said — such purchases require three to five months to complete and involve new tenders and mediating foreign companies.

Among those suffering are children with galactosemia. They will soon be deprived of treatment after Galactomin 19 formula runs out, thus threatening their lives and potentially leading to disability. Galactosemia is an inherited disease resulting from the body’s inadequate ability to metabolize the sugar galactose.

Barsh added that formula is not available in local markets in Gaza, and the price keeps rising and has reached $130 per carton compared with $70 before supplies were stopped. A family forced to pay for the medicine would need about $1,000 a month to treat one sick child. Sick children drink Galactomin from birth, as it is their main source of nutrition and medication to survive and ensure normal growth.

Muhammad Suleiman, 5, suffers from galactosemia. He sleeps most of the time, as he feels constantly bloated. He has been off Galactomin since early May. His mother, Samah, told Al-Monitor, “In the absence of Galactomin, my boy is in danger and his suffering is worsening. He must follow a strict galactose-free diet.”

She added that she cannot afford to buy the medication herself.

Raed Sultan told Al-Monitor he underwent a kidney transplant three months ago and has not received his medication. It is unavailable in the state hospitals, and he does not have enough money to buy it from pharmacies in the Gaza Strip.

Since the decision to halt medication and medical supplies to state hospitals in the Gaza Strip was issued, Hana Samara, who is only 32 and suffers from breast cancer, has found that her medication is unavailable in al-Rantisi state hospital in Gaza City and other hospitals, or even at pharmacies or private hospitals. Her health condition is worsening and her life is at risk.

She told Al-Monitor she has been receiving treatment and hormonal injections to prevent carcinogenic cells from multiplying and spreading in her body. Once the medication runs out, she will bleed and suffer complications.

Samara is but one of thousands of patients in the Gaza Strip who rely on free treatment from state clinics and hospitals as part of their medical insurance, and whose well-being is jeopardized.