The genesis of a Palestinian medical boycott

While the decision to stop new Palestinian referrals to Israeli hospitals will save the government $100 million a year, the call was a middle-ground agreement and will not be easy on the most vulnerable. 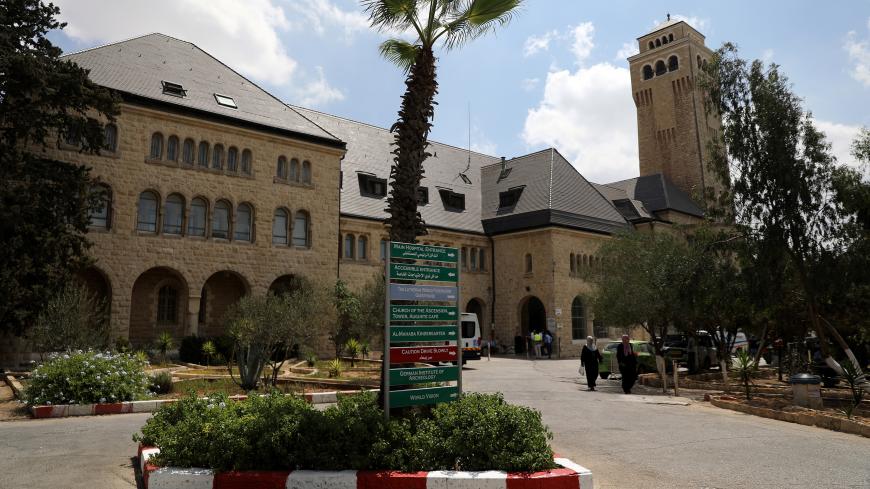 When it became clear that President Mahmoud Abbas would choose him to be the eighth Palestinian prime minister, Mohammad Shtayyeh huddled around him some of the top Palestinian economists and political experts to plan how to deal with the looming financial crisis. “We all know the depth of the financial crisis, and we are familiar with the various options that are available,” said a source who huddled with Shtayyeh and asked not to be identified.

“The choices ranged from a call for a total boycott of Israeli products and a call on Palestinians not to work in Israel, to acquiescing to Israeli and American dictates,” said the source, a businessman who was active in the first intifada. “In the end, a middle of the road decision was taken: An immediate end of referrals to Israeli hospitals will be instituted, while the more radical decision of boycotting Israeli products and worker no-shows would be postponed till later,” he added.

Sure enough, a decision was made to end all medical referrals and instead the sick would be referred to Palestinian hospitals or to nearby advanced medical facilities in Jordan and Egypt. The Palestinian Ministry of Health announced the decision March 26, saying the reason behind it was Israel’s refusal to hand over the entire monthly tax and custom fees collected on behalf of Palestinians as part of the 1994 Paris Economic Protocols.

It is not clear how much the decision will affect Israeli hospitals. Al-Monitor sought information from Hadassah Hospital in Jerusalem but was unable to receive any answer as to the amount of loss the decision has caused. No information was available from Palestinian or Jordanian sources, as the new procedure has not yet been finalized in contract form.

Osama al-Najjar, spokesman for the Palestinian Ministry of Health, told Al-Monitor that referrals to Israeli hospitals cost the Palestinian treasury a whopping $100 million a year. “We took the decision without a written agreement with either the Jordanian government or the hospitals in those countries, knowing full well that this would come later,” Najjar said.

One adjustment had to be made quickly: The Palestinian government decided not to cut off individuals who had already been referred to Israeli hospitals. “We decided that the government ban will apply only for new referrals and will not apply to the sick already receiving care in Israeli hospitals,” Najjar explained.

One of the first problems the Palestinian government had to take care of was to bolster hospitals in East Jerusalem. For the Shtayyeh government, the decision was both politically important and much more practical than sending patients and their families across the bridge to Jordan.

After some initial meetings with new Palestinian Minister of Jerusalem Affairs Fadi Hidmi — whose father was a long-time head of the Makassed Hospital in East Jerusalem — the Shtayyeh government approved May 9 a decision to increase the monthly support from the general budget to Palestinian hospitals in Jerusalem to 9 million shekels ($2.5 million). The Palestinian government has tried to regularly cover the cost of patients being transferred to Jerusalem hospitals, but those funds were usually less than the real cost of care. Jerusalem hospitals were caught off guard when the Donald Trump administration unilaterally stopped all US aid grants to Jerusalem hospitals to the tune of $25 million back in September 2018.

Najjar said the decision to medically disengage from Israel is going well. “[So far], it is going well. We have not yet signed any contracts with Jordan and Egypt, but they are helping us nevertheless based on verbal agreements, and they are accepting all the patients that the ministry is sending them. However, we hope that contracts will be signed sometime after Eid al-Fitr [the end of the month of Ramadan].”

People are happy the service is moving well, Najjar said, adding, “We have instituted major changes to cut waiting time for a referral decision to be made from more than two weeks in the past to no less than three days now.”

Dr. Daniel Shanit, a telemedicine specialist who was medical director at the Peres Center for Peace, told Al-Monitor that what the Palestinian government did recently is understandable, but it will cause pain to many Palestinians in need of high-quality medical help. “Considering the current policies of the Israeli government and the often-despicable inhumane behavior of its agencies, one may understand the knee-jerk decision of the Palestinian Authority (PA). However, turning civilians, and in particular, children, [into] hostages of evil government decisions is indeed unacceptable and will only achieve more pain and hardship,” said Shanit.

Shanit, who was instrumental in setting up and helping fundraise for the children's cancer center at the Augusta Victoria Hospital in East Jerusalem, said it is “essential” that politicians omit the most vulnerable elements of society from the ongoing equation of conflict management.

“In parallel, it is essential that the PA invests in securing its independent, quality clinical services through training specialists. Again, that option of training in Israel has always been available in Israel but unfortunately has never been exploited enough,” Shanit said.

There is no doubt that vulnerable Palestinians, especially children, are caught in a political struggle they have nothing to do with. While the decision to divorce from Israeli hospitals makes political and economic sense, it will cause hardship and pain, especially in the short term. For this decision to be effective, Palestinians and their allies must step up and invest heavily both financially and in training to ensure that Palestinian hospitals can carry the load and treat people where they live rather than force them to cross borders and go through humiliating security processes.