The Palestine Investment Fund announced the creation of a company to invest in the agriculture sector in line with the government’s plan to boost local production and decrease dependence on Israel. 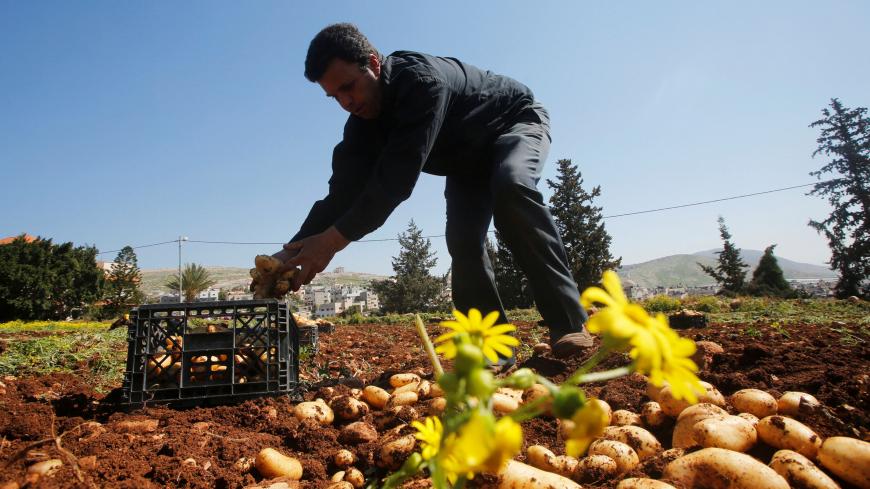 RAMALLAH, West Bank — The Palestine Investment Fund (PIF) is completing preparations to launch an agricultural investment company within four months. On April 30, PIF Chairman Mohammad Mustafa announced plans for the company, which will be controlled by Sharakat, the PIF’s investment arm for agriculture and human development.

The new organization will focus its activities on Area C, which includes most of the West Bank’s agricultural lands, constitutes around 60% of the West Bank and is under the administrative and security control of Israel. Prime Minister Mohammad Shtayyeh told Palestine TV on April 13, “[We] will deal with the Palestinian territories as agricultural clusters, and no one can prevent the government from operating in Area C because it is Palestinian land.”

Nassim Nour, managing director of Sharakat, told Al-Monitor that the PIF already has investments in several agricultural projects worth $8 million, most notably, a plant for producing animal feed and a farm for milk production in Hebron and a vineyard in the Jordan Valley. These operations will come under the purview of the new company, which Nour said, will serve as a national platform for agricultural investment.

Nour said the investment company's goal is to promote local production, achieve self-sufficiency, create jobs and protect Palestinian land and farmers. “Establishing the company aims to encourage investments in agriculture in Palestine, reduce dependence on imports of food, agricultural goods and meat and to find an alternative so farmers would not have to work in Israel or in settlements,” he said.

Nour further explained, “The company’s main objective is not to generate financial returns, but to provide jobs in the agricultural sector, develop and cultivate additional land and promote our Palestinian products by focusing on sectors where there is a shortage, such as red meat, fruits and food industries and animal feed.” He added that the company will not compete with small farmers, but will look for gaps in the agricultural sector and fill them through partnerships with the farmers and by working with agriculture experts from the private sector.

PIF has set strategic goals for the next 5 to 10 years, with an eye toward modernizing the agricultural sector, enhancing food security, raising local product quality, providing competitive opportunities on the local market, promoting local products in foreign markets, reducing imports, increasing production, and encouraging foreign funding for the agricultural sector, in particular by Palestinian expatriates.

“The company's initial capital is $80 million, of which $50 million will be provided through financing and loans,” Nour said. “Some European parties have already expressed interest in funding the company. The remaining $30 million will be guaranteed by the PIF and private investors.”

The announcement comes after the Palestinian Authority (PA) expressed interest in developing agriculture on the West Bank and in Gaza amid the sector's declining contribution to gross domestic product (GDP). Agriculture's share of GDP dropped to 2.8% in 2017 ($390 million), according to the Palestinian Central Bureau of Statistics (PCBS), compared to 3.1% in 2016. Earlier, in 2002-03, it had been as high as 9.2% of GDP.

On May 9, the PA Ministry of Agriculture reached an understanding with the PCBS to conduct a comprehensive agricultural survey of the West Bank and Gaza in 2020 to compile an updated database on the sector. The information will be used to develop new strategies and agricultural policies.

Agriculture Minister Riad al-Attari told Al-Monitor that 43 million shekels ($12.3 million), 9% of the state budget, were allocated to his ministry in 2018 and that an increase was needed. The PA has not yet approved a budget for 2019, amid a financial crisis exacerbated by Israel unilaterally deciding to deduct a certain portion of the taxes it collects on behalf of the PA and the PA therefore refusing to accept any of the funds. In light of this situation, the PA adopted an emergency financial plan that continues through July.

After the formation of a new government on April 13, the Ministry of Agriculture set out a three-month action plan for April 15 through July 15 to promote and support Palestinian farmers, to help them preserve their presence. Attari explained the concept behind the plan, stating, “The conflict with Israel is on every inch of land, specifically in contact areas and agricultural areas in the Jordan Valley.”

Accordingly, Attari asserted, the plan aims to promote steadfastness of farms through natural resources development, road construction, land reclamation, new plantings and the introduction of new products, creation of employment opportunities for women and youths, development of fisheries and new wells to collect water for farmers.

The plan costs 93 million shekels ($26 million), 43% of which will be allocated to Gaza, Attari said. The PA will pay for some 60% or more of it, while local institutions, such as agricultural unions and civil society organizations involved in the agricultural sector, and international partners, such as the Food and Agriculture Organization (FAO), will contribute around 40%. The FAO's contribution is being funneled through projects already underway in coordination with the Ministry of Agriculture. Attari said that part of the plan had been implemented in late April and involved distributing some 4.2 million euros to farmers in Gaza who have been negatively affected by the military conflicts with Israel. Also as part of the plan, Attari said, his ministry will create 121 miles of agricultural (service) roads in the West Bank and augment forest areas by planting 600,000 trees.