Small farmers in the West Bank will soon benefit from a new agricultural project that aims at boosting economic growth. 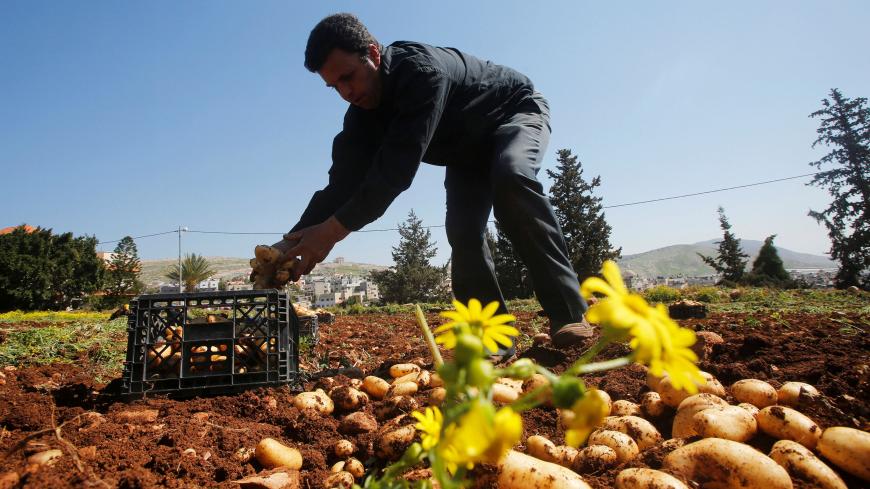 A Palestinian farmer collects potatoes during the harvest in the West Bank village of Al-Fara near Jenin, March 6, 2017. - REUTERS/Abed Omar Qusini

RAMALLAH, West Bank — The Palestinian Ministry of Agriculture in the West Bank launched July 2 the Resilient Land and Resources Management Project, which is one of its largest. The $41.5 million project is funded by the Palestinian government, in coordination with the International Fund for Agricultural Development (IFAD) and the OPEC Fund for International Development.

The project is among the most important for developing agriculture in the Palestinian territories, and it will take six years of work. It aims to raise the levels of agricultural economic growth in the territories, specifically in urban areas, by increasing the area of planted lands and agricultural production, consequently boosting the financial profit.

The director general of the project, Ammar Salahat, told Al-Monitor that as soon as the plan was launched, the Ministry of Agriculture held an intensive workshop July 5 for its staff to form a project management unit made up of involved governorates and departments to distribute tasks and powers.

Minister of Agriculture Sufian Sultan said during the inauguration, attended by Al-Monitor, that the project is in alignment with the impact study of the Natural Resource Management Program funded by IFAD and also "complies with the national strategy of the agricultural sector for the years 2017 to 2022 and with the national political agenda and its priorities during the same period.”

The Natural Resource Management Program was carried out between 1998 and 2014. The $28 million program aimed to reclaim agricultural lands and improve their quality, as well as to improve crop production and seek more efficient water use.

Sultan said the project will be implemented in all governorates of the West Bank and will focus on six out of 11 of these governorates, namely: Jenin, Tubas, Tulkarm, Bethlehem, Hebron and Nablus. It will aim at “integrating weaker groups like small-scale farmers, the poor, cattlemen and unemployed men and women as well as families that have limited opportunities to reach agricultural lands. Around 30,000 families are expected to benefit from the activities of the project.”

According to the project plan, 18,000 dunams of agricultural land will be developed and reclaimed using activities and techniques that take climate changes into account. To help serve and reclaim this land, 100 kilometers (62 miles) of agricultural roads will be built or improved. A unit to manage the project was formed, and the project will be launched simultaneously in the governorates.

Sultan said the project “will support women and allow them to manage their lands. It will also generate 900 profitable agricultural projects available for young men and women. Ten stations will be established [in certain areas across the West Bank] to accumulate the agricultural products from small-scale farmers and market them. The aim is to address the low productivity and the limited commercial prospects of small-scale farmers and provide these stations with necessary tools and material.”

In addition to the financial support, the project will focus on developing the knowledge and skills of farmers. Sultan said, “Palestinian farmers benefiting from the project will receive training sessions to take effective measures to protect their crops and animals from diseases related to climate change.”

He added, “The project will contribute to enhancing food security in targeted governorates by increasing food production, improving affordability of staple foods, and boosting the income of the poor in rural areas as a result of increasing production and good marketing. It will also help farmers and rural families adapt to new conditions by providing climate information at the right time and offering the needed training for adaptation.”

Salahat said the project will address several problems farmers are facing, such as having difficulty reaching their lands and increasing production. He indicated that the project will help resolve land issues through reclamation and the creation of roads and mitigate other problems involving water, the of marketing agricultural products and climate change.

He said, “The project will focus on three aspects: developing lands and using healthy and affordable practices to protect the environment; connecting farmers whose lands will be reclaimed to the market by establishing stations to gather production, especially as they are small-scale farmers with limited production; and, finally, offering men and women profitable agricultural projects of their choice.”

Salahat said land reclamation focuses on increasing production through land gradation, increasing its fertility or providing the water harvesting technique. Lands that will be reclaimed are to be planted with fruitful trees, with the idea that production, sales and profits will increase.

He said, “The reclamation will include the agricultural land to be planted with fruit trees such as almonds of all kinds and olives, in addition to the rehabilitation of pastures for livestock in the eastern slopes of the West Bank, which will be reclaimed and protected, with the support of livestock breeders.”

The project also aims at conserving land close to the water valleys, which face erosion in the rainy season. Salahat confirmed that land will also be developed around the water treatment stations in Jenin, Hebron and Nablus.

He said that treated water will be used to grow crops and that farmers would be trained to "establish irrigation networks from stations to land and cultivate trees that grow on wastewater.”

IFAD Middle East and North Africa Director Khalida Bouzar said during the launching of the project that “it will protect farmers from climate change and will increase their income and resilience. It will also develop their lands through eco-friendly practices and through connecting poor farmers to the market. This would boost the rural economy.”

Despite the multiple agricultural projects in the West Bank, this particular one is considered the most important because of the high hopes that it will be the best positioned to improve the situation and boost the income of small-scale farmers and engage other men and women in rural agricultural production.