The Iraqi government is studying a licensing proposal that would allow foreign investment in agriculture to increase revenue from agricultural production. 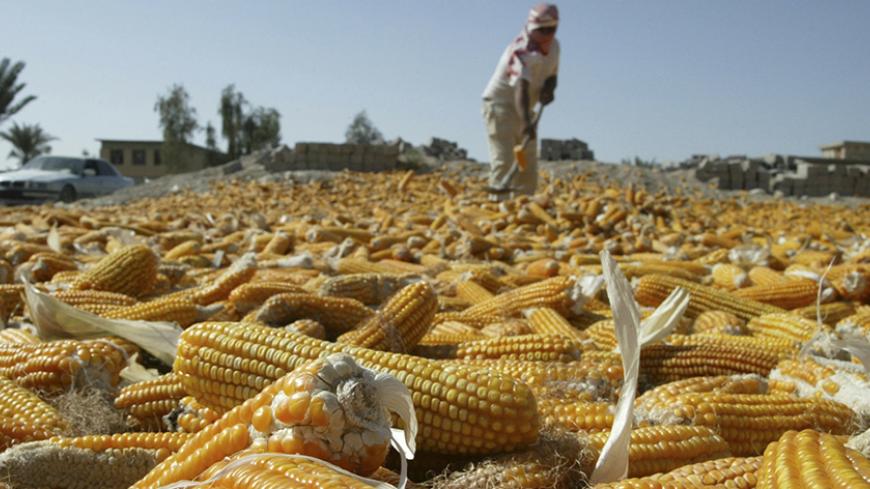 BAGHDAD — On Oct. 23, the Iraqi parliament’s agricultural committee reported that Iraq imports more than 75% of its vegetables and animal products. Meanwhile, agriculture experts conducted a study that they presented to the Cabinet on Oct. 22, calling for organizing agricultural licensing rounds to save the agricultural sector from its miserable situation and putting an end to the foreign currency pullout by inviting foreign companies to invest in agricultural land.

On July 19, the Ministry of Agriculture estimated the cultivated land in the country for 2015 at nearly 6 million acres, while the overall arable land is 52 million acres. Agriculture contributes about 7% to the gross domestic product (GDP), which has reached, according to the World Bank, $168.6 billion; this is considered to be a very low percentage, especially since Iraq is classified as an agricultural, oil-rich country.

The person behind the idea of agricultural licensing rounds and inviting international companies to invest in Iraq, agricultural expert Riad Farhan Abdul Karim, told Al-Monitor, “The country is suffering from the agriculture sector’s failure because it still follows methods used by the Sumerians, Babylonians and Assyrians when it comes to agriculture and irrigation. Developing this important sector is everyone’s responsibility.”

He said, “I have presented a comprehensive study to the government about agricultural licensing rounds. The government welcomed the idea and said it will be studying it in the coming days, but we are still waiting. For agriculture to prosper, we need to improve how workers do their jobs, increase land production and use modern methods. This can only be done by bringing in international companies.”

Abdul Karim said, “Iraq can be accessible to global agricultural companies; they can invest in livestock in addition to establishing plants for the processing of agricultural products. This can be achieved through the agricultural licensing rounds that will first begin in the safe areas such as the majority of south and central Iraq.”

Abdul Karim’s plan put forward several ideas such as “signing agreements with international companies for 25 years to cover domestic consumption and export the remainder by developing certain standards and laws in order to avoid the same mistakes that occurred in the oil licensing rounds.”

He added, “With such agreements that will take into account the interests of farmers, the state and the investing company without harming the country’s sovereignty, Iraq will become rich and the state's resources will grow stronger.”

The revival of the agricultural sector could be impeded by many factors, such as the lack of water and the deteriorating security situation, particularly in the provinces classified as agricultural areas such as Ninevah, Anbar and Salahuddin, which have turned in recent years into an arena for battles with the Islamic State (IS). In addition, Iraq has been importing agricultural goods between 2003 and 2015 worth $54.1 billion.

Hisham al-Madfai, an expert on agriculture and water, fears incompetent foreign companies would invest in the country. Madfai told Al-Monitor, “Agricultural licensing rounds will serve the country very much by bringing in global agricultural investment companies.” He stressed, “Arable land, water and a labor force are available in Iraq, and investment companies will only have to bring technology and experts.”

He added, “The Iraqi environment is all set for companies to invest, especially since Mosul is being liberated from IS. The state can eliminate the armed groups that blackmail companies.”

Agriculture Minister Mahdi al-Qaisi told Al-Monitor, “One of the possible solutions to save agriculture is foreign investment because they bring large amounts of money into the country, in addition to modern equipment for agriculture and irrigation." He saw licensing rounds as a means to do this.

He said, “One of the obstacles impeding investment at the moment is the scarcity of water in the Euphrates, which will also affect the Tigris River after Turkey establishes the Ilisu Dam.” He also said, “The agricultural sector’s contribution to the GDP has fallen in recent years from 11% to 7%.”

However, economist Salam Adel told Al-Monitor, “Organizing agricultural licensing rounds is difficult at the moment because the agricultural areas are located in heated areas where security is unstable, specifically in the provinces of Ninevah, Salahuddin, Anbar and Diyala,” pointing out that “the global agricultural companies are looking for stable regions, which are currently difficult to find in Iraq.”

He concluded, “The staff of foreign companies operating in Iraq may be exposed to extortion and kidnappings due to the proliferation of armed groups, and especially since they do not operate in one place, but in open lands that are difficult to secure.”

Finally, it seems that no one disagrees with the overall idea of agricultural licensing rounds. However, like any other project in Iraq, when it comes to implementation, it faces the lack of security that is a dead end for all projects in Iraq.