The Islamic State attacks and defensive military operations have affected the agricultural sector in Iraq's Salahuddin province, where wheat production had been expected to reach 4.5 million tons this year. 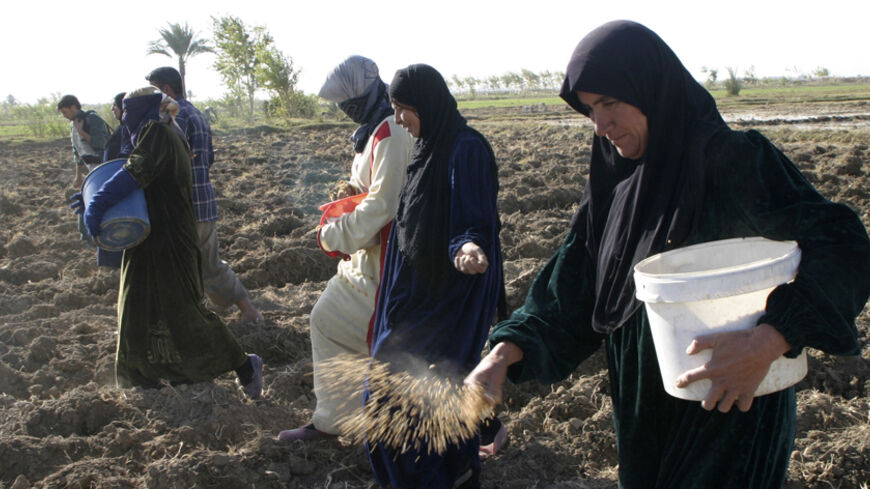 Approximately 60% of the residents of the Salahuddin province, 175 kilometers (109 miles) north of Baghdad, work in farming. Salahuddin was ranked the top producing province in agriculture in 2012, and earned about $400 million from agricultural products. However, the ongoing military operations in the province have cost the province its plans to cultivate 900,000 acres of wheat and barley this year.

Hamadi Jiyyad is one farmer who had hoped to see an agricultural boom in 2014 and prepared his land in the Tikrit district for wheat cultivation. However, the fighting near his fields forced him and his family to flee to Baghdad, and he postponed the winter planting until next year.

After the Islamic State (IS) threatened to kill Jiyyad if he did not pay it a sum of money, he left and rented a house in Baghdad. He now sits in front of the TV screen following the news and hoping that the operations will expel IS from his province. Jiyyad told Al-Monitor, "The land was not affected, just the crops. I can farm the land in the future, but this year will be a big loss. I don't know if the state will compensate us or give us loans."

Prior to the start of the military operations, Salahuddin's farmers had suffered from the poor quality fertilizers provided by the Iraqi Ministry of Agriculture. While this issue drove migration from rural to urban areas, many residents remained and continued to farm, hoping that the ministry would import better insecticides and fertilizers.

IS controls several cities in various Iraqi provinces and is engaged in heavy fighting with the army over territory, especially in the provinces of Ninevah, Salahuddin and Anbar. This fighting has significantly affected the economy of the region, particularly the agricultural sector.

There were reports that IS imposed taxes on farmers for the irrigation of their land, especially in Ninevah province, where IS controls all aspects of residents' lives.

While Jiyyad's land is unharmed and he will return to cultivate it after the military operations end, Rislan Muslim — whose land in the Rabia district (in Ninevah, along the Syrian border) was torched by IS — does not think that his fields will be suitable for cultivation in the future. Muslim fled along with his family to Dahuk province after IS entered Ninevah. He is now living off his savings, and despairs at returning to his city after it fell "into the hands of terrorists at such astounding speed."

Muslim told Al-Monitor by phone, "The government must hasten to remove the murderers from our lands and support us so that we can farm it once again."

At the moment, it doesn't seem that the Ministry of Agriculture has a plan to restore the land and the agricultural industry that was affected. It is waiting for the army — with the help of US airstrikes — to eliminate the IS invasion.

Spokesman for the Ministry of Agriculture Haroun Rashid al-Hijami told Al-Monitor, "The first offices that were burned and looted were the agricultural directorates in Salahuddin and Mosul. The agricultural damage can be summarized by the loss of more than 80,000 head of cattle, 15,000 buffalo, 1.25 million sheep, 114,000 goats and 12,000 camels. The fate of these animals is unknown in Mosul."

Hijami said that IS "burned all the wheat and barley warehouses," adding, "The Ministry of Agriculture's statistics are not precise because the arson attacks coincided with the harvest season.

"The land was not affected. Yet, as the security problems happened at the time of harvest, the plantings and crops were affected," he stressed.