'Day of the locusts' in Syria's Idlib

A swarm of locusts have destroyed an estimated 60% of crops in Idlib province, threatening the livelihoods of thousands of residents. 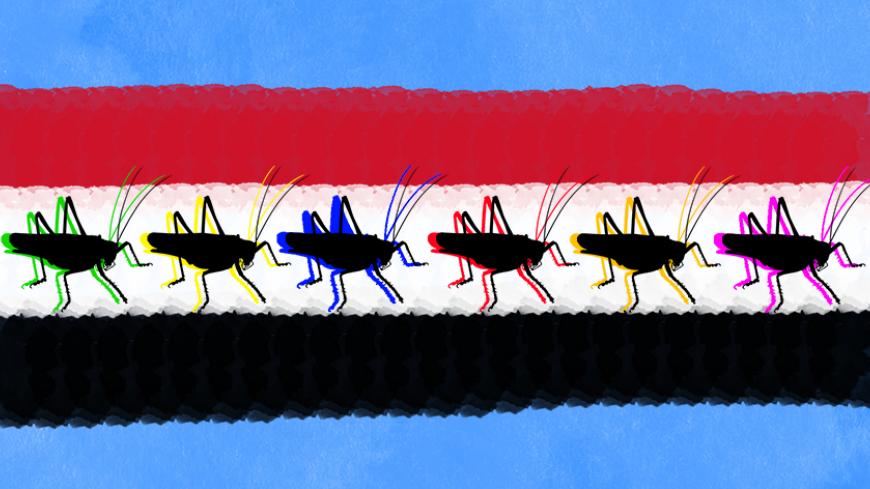 The civil war and resulting lack of resources is making it impossible for farmers and officials in Idlib province to control this year's locust swarm. Image by Hugo Goodridge/Al-Monitor -

IDLIB, Syria — With harvest season in full swing, farmers and officials have begun to calculate the damage done by a swarm of locusts that descended in April and May on large areas of opposition-controlled Idlib province, in northern Syria. From early May to late June, farmers usually harvest wheat, barley, lentils, chickpeas and cumin, among other crops, in addition to several types of vegetables on the province's plains and plateaus. Agriculture is the most vital economic activity in Idlib. Before the Syrian revolution, Idlib was a top olive oil producer, second only to Aleppo in the country.

Locusts appear every year in the area, but the ongoing civil war, weakness of the self-proclaimed Syrian Interim Government and lack of resources available to the Idlib Agricultural Directorate are the primary factors that have allowed the destructive spread of the agricultural pest this year. In the absence of effective measures, large tracts of agricultural land run the risk of desertification.

The locusts have settled in the areas of Shahshbo Mountain and Jabal al-Zawiya in the Idlib countryside, jeopardizing olive trees and pistachio nut trees, among others. Idlib farmers called on the Free Idlib Provincial Council to join the fight and swiftly secure insecticides to try to stanch the problem.

Khaled al-Hassan, director of the Idlib Agricultural Directorate, told Al-Monitor that both the council and the directorate had responded to the farmers' appeals and formed committees in May composed of agricultural engineers who assessed the scale of the disaster firsthand and distributed pesticides. These limited pesticides available could in no way eliminate the scourge altogether. Hassan said the directorate estimates that 6,000 hectares of agricultural land have been affected by the swarm.

“Locusts killed about 60% of the agricultural crops in Idlib province, mostly in the Shahshbo Mountain,” Hassan asserted. “We noticed the spread of this scourge in 2016, but we were unable to contain it because of the directorate’s lack of the necessary tools, equipment and pesticides, and this caused the spread of more locusts this year. Even al-Rouj plain, al-Jabal al-Wastani and the Harim Mountains have been affected in Idlib.”

He further stated, “We contacted all of the foreign agricultural parties and institutions to get their support to fight this insect, but in vain. Still, the Idlib Agricultural Directorate did not give up and deployed the modest capabilities it had to fight the scourge with the help of local councils in Idlib by spraying various insecticides. This helped limit the spread of this pest in the hopes that it will prevent a similar scourge in 2018.”

Mohammad Salam, 45, from the town of Hass, 12 miles south of Idlib city in the center of the province, told Al-Monitor that he lives entirely off his agricultural produce. This father of six children remarked, “I harvested 10 hectares of wheat crops on June 8, but the yield was so small that it did not cover the financial cost of planting the land and did not exceed 20% of the average production that I harvested in the years preceding 2016.”

Salam further asserted, “The spread of this pest is the result of what happened in 2016, when our agricultural harvest in Idlib was significantly affected, and locusts also spread, with a large portion of wheat, barley and olive crops being destroyed. The problem was not addressed by the Idlib Agricultural Directorate until late in the year, after locusts had laid their eggs, causing a wider spread of the insect this year.”

Under normal conditions, a farmer cultivating 10 hectares, about 25 acres, with wheat would harvest around 30 tons. The price of one ton of hard wheat was around $270 and one ton of soft wheat $265, allowing farmers to earn about $2,700. A farmer cultivating 100 olive trees could earn about $3,000 in a good season, with each tree producing on average oil worth an estimated $30.

Hossam Mahalli, director of the agriculture office for the Kfar Derian council, 12 miles north of Idlib city, spoke to Al-Monitor about the situation, stating, “The town of Kfar Derian suffered from swarms of locusts that in February started to eat the agricultural crops for which the town is known. Wheat, barley, vegetables and fruit trees, such as olives and figs, were among the damaged crops, which barely yielded 30% of what they usually produce.”

Mahalli further asserted, “The local council of Kfar Derian made great efforts to fight this insect with the distribution of the necessary pesticides, but the quantities were minor compared to the problem, which requires a greater capacity beyond that of the local councils.”

He lamented, “Locusts threaten summer crops and fruit trees, and we are unable to address this scourge at the present time.”

It is no guarantee at this point that the Idlib Agricultural Directorate will be able to lay out programs capable of preventing a similar scourge in early 2018 or secure the large amounts of pesticides farmers need to fight against it. Hassan noted that the war is undermining another line of defense, stating, “Idlib’s farmers hope for the return of the stork bird, which feeds on locusts and naturally fights this scourge, but it has been years since this bird, among many others, stopped settling in Idlib because of the war.”