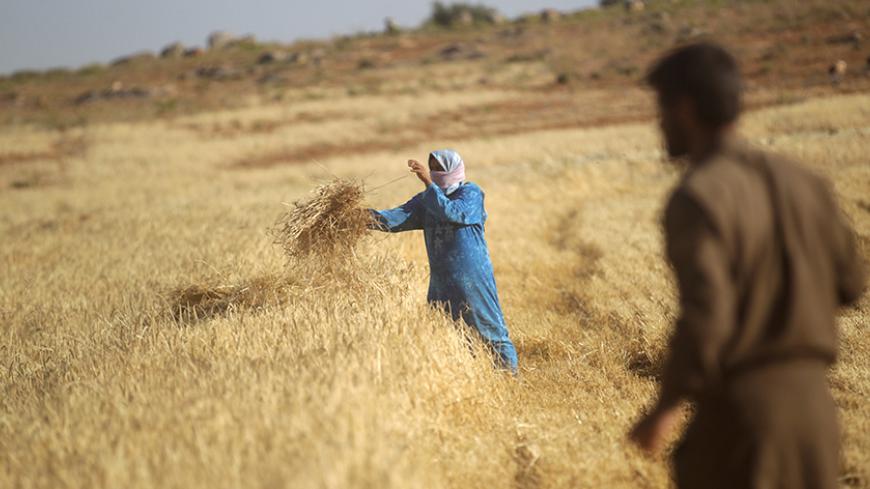 Syrian farmers work in a wheat field in Maarshamsha in the Idlib countryside, May 31, 2015. - REUTERS/Khalil Ashawi

Syria's location in the Mediterranean basin and the country's territorial diversity — shores, mountains, plains and rivers with dams — has long made agriculture a pillar of its economy. The country's products are as diverse as its environmental and geographical areas: wheat, barley, legumes, olives, grapes, cherries and citrus fruits.

But now, five years into the country's civil war, the agricultural sector in Syria is threatened with complete collapse. This led the Global Seed Vault to open its doors because officials fear some of Syria's agricultural products could go extinct.

Semaan al-Kheir, a farmer from the countryside of Homs, told Al-Monitor by telephone, "We previously relied on rainfall to irrigate winter crops and on the irrigation water provided by the Ministry of Agriculture during the three months of summer, which proved enough for summer crops, leaving the soil well irrigated with the needed organic components. Today, five years into the war, we are only relying on rainfall, bringing summer agriculture to a halt. The production decreased due to soil exhaustion and lack of condensed chemical fertilizers. We are now using the available natural fertilizer [manure]."

The research centers assumed a major role in developing agriculture and enhancing seeds for better products. Khalif al-Ouweid, a former engineer at ICARDA now living in Aleppo, talked to Al-Monitor via Skype.

"ICARDA focused on supporting agriculture research on environmental, technical, economic and social factors in Syria as a developing country to achieve food safety. It was founded in 1977 in Tal Hadya, around 30 kilometers [19 miles] southwest of Aleppo. Its work has expanded since 2000. The center used agricultural expertise to improve the genetic origins of grassy crops such as barley, wheat and legumes. Production has intensified on dry lands, and Syria witnessed agricultural development in production and cultivated areas due to the improved seeds the center provided to farmers," he said.

However, after the armed conflict set in, agriculture centers, like other service facilities, were not spared. Work at the center ended in November 2011 after the Syrian army began using it as a site for artillery and rocket launchers to strike opposition-held areas around Homs, Ouweid said. When the opposition took over the center in mid-2012, it refused to allow operations to resume, knowing the center would be targeted.

"Indeed, regime aircraft targeted the center more than once, and it was finally destroyed at the hands of Russian aircraft … in November 2015. Genetic labs are in the possession of armed opposition groups operating in the north of Syria," he added.

The chaos of war naturally affected both farms and farmers, the economy and the populace. Diseases such as wheat rust also hurt production and diminished cultivated areas, Ouweid said.

Hind Majalli, a translator who helped draft Daraa's agricultural plans, said via Skype from Berlin, "The agriculture sector in Daraa has suffered great losses due to the siege imposed on the city. The city allocations of seeds and fertilizers were no longer provided. The irrigation system suffered significant damage due to shelling and bombing, which led to disruption of operations, and thus large proportions of crops were destroyed, and huge numbers of cattle died."

The hardships of the siege forced Syrians to find new means of maintaining crop production.

In Rif Dimashq, which has been subject to the siege for the past three years, residents survived by growing crops on rooftops. "Civilians in Rif Dimashq were able to break the siege and get legumes and other essential products by buying seeds from other areas despite the high prices. They then planted the seeds in containers on the rooftops of buildings, and it was only a few months before the population began reaping what they planted," media activist Anas al-Khawli told Al-Monitor.

The Assistance Coordination Unit launched a wheat program, the largest of its kind since the revolution erupted. The program aims to reinforce farmers' commitment to their lands by ensuring that their current crops are sold and by encouraging them to cultivate crops for the next season. The program then provides flour for bread to areas in need.

In January, the UN Food and Agriculture Organization (FAO) called on all donors to increase funding to farmers in Syria to keep the situation from deteriorating further. The FAO operates in 13 of Syria's 14 provinces.

"The conflict has decimated the agriculture sector, which has had a major impact on food supplies and markets. Currently, over half of Syrians remaining in the country are food insecure, with one in three people unable to afford basic foods," FAO Director-General Jose Graziano da Silva said in a Jan. 20 news release.

"We must not forget the farmers who remain in Syria and are struggling to keep their lands productive. These farmers are predominantly women — who now make up 63% of the agricultural workforce — and are the backbone of Syria's food supply," said Laurent Thomas, FAO assistant director-general for Technical Cooperation.