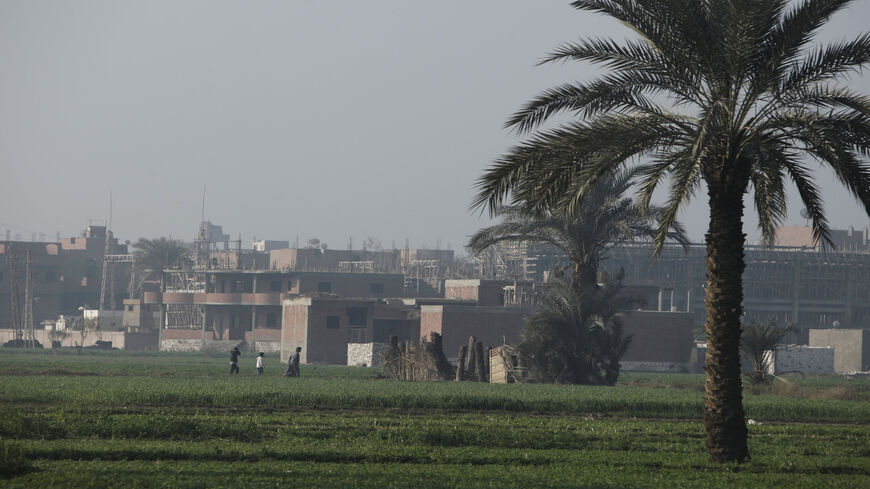 Egyptians walk through a field in the rural district of Fayoum, Egypt, Jan. 15, 2014. - Ed Giles/Getty Images

CAIRO — Farmer Saeed Saber's financial prospects had been worrisome in the past. However, a few months ago, his neighbor advised him to scrap rice and grow sunflowers instead in his 10-acre farm in the central province of Fayoum, 116 kilometers (72 miles) southwest of the capital Cairo.

"The sunflowers are changing my life and the lives of all the farmers growing this crop," Saber told Al-Monitor. "The flowers are bringing in a lot of money."

Sunflower growing is changing the fortunes of farmers in Fayoum, bringing hope to the agricultural sector in the city and creating employment for thousands of farmland workers who were about to desert farming altogether.

The plant is lucrative to cultivate and takes a lot less effort to grow than other crops. It brings in assured income for Fayoum's farmers and landowners.

An acre of farmland produces around 2 tons of sunflowers, and it takes the flowers about 80 days to grow and ripen.

Fayoum farmers can grow the sunflowers twice annually between May and August, thanks to proper weather conditions at that time of the year.

Soon after they harvest the sunflowers, the farmers deliver the output to the government and the private sector waiting eagerly to take the produce.

"The clients are always ready to buy the produce from the farmers," Rabie Abdel Gelil, agriculture chief in Fayoum, told Al-Monitor. "The farmers also compete to increase the productivity of their fields."

At the same time, Egypt is making efforts to increase its vegetable oil production in the hope to reduce the exorbitant cooking oil import bill.

The populous country consumes around 2.6 million tons of vegetable oils annually, whereas it produces 500,000 tons of these oils only.

This forces Cairo to pay billions of dollars for the imports every year, creating additional pressure on the embattled national budget.

Vegetable oils are among the nation's top import items, together with corn, wheat and cotton.

To increase the production of cooking oils, agricultural authorities in Cairo encourage the cultivation of oil crops.

"We are focusing now on oil crops in light of national plans to reduce the gap between oil production and consumption," Alaa Azouz, head of the Guidance Section at the Ministry of Agriculture, told Al-Monitor. "Reducing the imports will save a lot of foreign currency."

Sunflowers are now at the heart of this drive and Fayoum is taking center stage.

The province is becoming Egypt's sunflower growing hub and farmers like Saber constitute the small details of the large picture in this regard. In fact, these farmers are taking advantage of the national urge for increasing oil production.

This year, Saber's farm produced 20 tons of sunflowers. Government-affiliated companies buy 1 ton for 8,500 Egyptian pounds (roughly $541). This means that Saber will end up earning $10,800 after selling the produce, a fortune for a farmer like him.

Fayoum's farmers are using the income they generate from growing the sunflowers to improve their living conditions and those around them.

"The income I get from selling the product helps me and other farmers make ends meet," Saber said. "The same income is changing the lives of the farmers for the better."

Now Egypt's sunflower growing hub, Fayoum used to be the country's illegal immigration center to Europe for many years.

The city used to send its youths on precarious journeys across the Mediterranean en route to Europe. Some of them succeeded in reaching European shores, especially those of Italy; others died while traveling.

The deep marks of these waves of immigration are strongly manifested in the urban parts of the city. Some of the buildings in the province are influenced by Italian architecture. Most of the shops in the central part are called after Italian cities, such as Rome, Milan and Naples.

There is a startling urban activity in Fayoum, one feeding on the money sent home by the thousands of locals living in Europe. Sunflower growing will potentially compete with immigration as a source of income for the city and its residents.

Around 1,000 acres of farmland are cultivated with sunflowers in Fayoum this year, up from 25 acres last year.

Behind this zeal for growing sunflowers is a huge set of factors, including support from the government in Cairo for farmers like Saber.

The government has introduced "contract farming" to sunflower growing, whereby the Ministry of Agriculture or the private sector signs contracts with sunflower farmers to buy their produce, even before it ripens.

During the farming process, the farmers get all types of support for this process, including seeds, fertilizers and technical advice.

Abdel Galil has been at the center of the application of this contract farming system for some time now. Known as "the sunflower king" in the province, he moves from one farm to another to advise the farmers on the best sunflower farming practices.

He said there is major enthusiasm for sunflower growing in Fayoum.

"Some of the farmers who do not grow sunflowers just want to copy the experience of those growing them," Abdel Galil said. "The high economic returns from growing the sunflowers are making people enthusiastic about them."

He and fellow Ministry of Agriculture officials in the province hope to increase the farmland cultivated with sunflowers four-fold by next year.

Egypt also hopes to increase the farmland cultivated with sunflowers to 100,000 acres, from less than 15% of this space now.

This increase in farmland cultivated with the crop is necessary for national vegetable oil production to cope with the growing consumption needs.

Nonetheless, Egypt is banking on other crops to increase vegetable oil production as well, including soybeans. This year, Egypt cultivates 250,000 acres of its farmland with soybeans.

The sunflower fields in Fayoum offer a picturesque and heavenly background to the homes, alleyways and roads of the city. The large plants cover vast areas in parts of the city, turning into an attraction of their own.

Fayoum is known for a long list of attractions, including Wadi El Rayan, the Pyramid of Amenemhet III and Qasr Qaroun Temple, and is now adding sunflower fields to that list.