Egypt plans to agriculturally integrate with a number of water-rich countries in Africa to address the worsening food shortages in Egypt and the country’s inability to increase the size of agricultural land because of a lack of water. 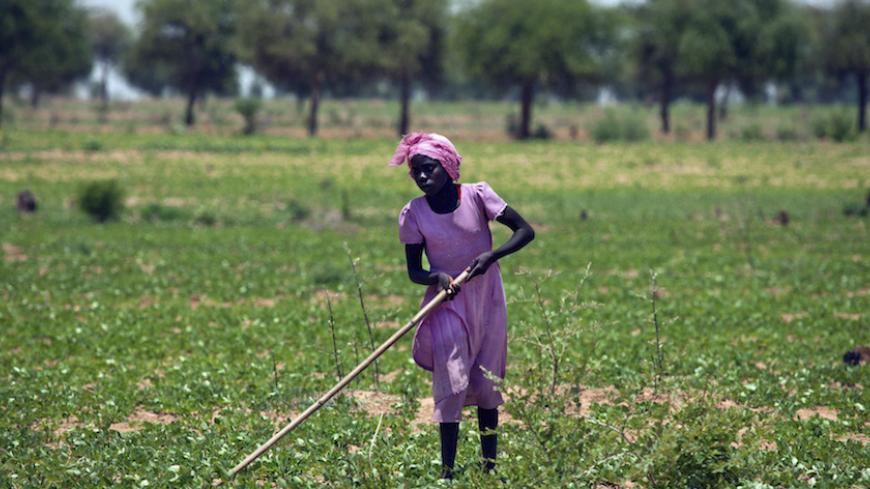 A girl farms the land during the rainy season outside Gereida, Sudan, July 25, 2012. - REUTERS/Albert Gonzalez Farran/UNAMID

CAIRO — Amid Egypt’s water scarcity, which threatens to worsen the country’s food shortage, Cairo is working to form agricultural alliances outside its borders. The efforts — which have been in place as limited experiments since the 1980s under Egyptian President Hosni Mubarak — include sending Egyptian farmers to cultivate land in Sudan and Congo, transfer their expertise to those countries and take advantage of the available water to cover the food needs of the Egyptian people. The efforts also aim at establishing model farms for strategic crops in a number of countries, including Mali, Niger and Zambia.

The countries covered by the Egyptian project for foreign agriculture have an abundance and diversity of water sources, but declining agricultural development due to lack of funding and agricultural machinery. In Sudan, which has a surface area of ​​1.8 million square kilometers (445 million acres), cultivated areas do not exceed 45 million acres, according to the latest statistics by the Central Bank of Sudan. That is about a fifth of the country’s arable area, estimated at 200 million acres.

The ​​surface area of the Democratic Republic of Congo, the second-largest African country, is 2.35 million square kilometers (581 million acres). The country has ​​1.3 million square kilometers (321 million acres) of forest areas. Several rivers — such as the Nile and the Congo rivers — supply the Congo with a lot of water and the country’s arable land is of excellent quality. Nevertheless, 95% of the country’s population suffers from hunger.

At the Arab Summit in March, Sudanese President Omar al-Bashir put forth an initiative for Arab food security to have the troubled Egyptian program cultivate thousands of acres in Sudan.

In April, the Sudanese government announced the allocation of Sudanese land in several water-rich areas where the Egyptians can implement joint projects in food security and by using the agricultural integration program. The latter aims to achieve self-sufficiency when it comes to agricultural and food production. The program was announced in a meeting in Khartoum on April 24, in the presence of five ministers concerned with agriculture and irrigation issues from the two countries.

The Sudanese government had allocated 200,000 acres in Damazin and Kassala as the project’s first stage in Egypt. The Egyptians chose cotton crops and sunflower as a start to cultivate Damazin, where 20,000 acres are currently being cultivated, out of a total of 100,000 acres.

Efforts on the part of the Egyptian Farmers Union had preceded the latest governmental measures to achieve agricultural integration. These efforts started in December. Mohamed Burgos, the head of the union, told Al-Monitor that the union was given 100,000 acres by the Sudanese Ministry of Investment.

“We are currently working to establish a mechanism to allocate 10 acres per Egyptian farmer who would live there and cultivate the land with wheat and oil crops such as flax, soybean and sunflower. Sudanese officials granted me 100,000 acres as a gift for Egyptian youths in the northern province in Sudan, in my capacity as leader of Egypt’s farmers. It has nothing to do with the rest of the land that the Egyptian government, represented by the Ministry of Agriculture and the Ministry of [Water Resources and] Irrigation, has agreed to receive for cultivation,” Burgos said.

Burgos pointed out that this land will be irrigated by Nile water and its output will be split 50-50 between the two countries. He said, “Distributing these lands to the youths will be through a benefit program until the land is cultivated, and once [the youths] prove their seriousness, ownership of the lands will be handed down to them." He said he welcomed the agricultural integration program with Congo, but expressed fear that the security conditions in Congo would hinder the resettlement of Egyptian farmers.

Hossam el-Moghazy, Egypt’s minister of water resources and irrigation, said that the agricultural integration program between Egypt and its neighbors, especially Sudan, is an important step to achieve food security. He told Al-Monitor, “This integration will provide food for our people.”

On the other hand, water experts in Egypt fear the consequences of the expansion of the agricultural areas in Sudan and the impact on Egypt’s water quota. Haitham Awad, the president of the Irrigation and Water Hydraulics Department in the faculty of engineering at Alexandria University, spoke to Al-Monitor about Egyptian cultivation in Sudan. He said, “We are growing crops outside of Egypt by using water that was originally coming to us. And this is useless. However, Egyptian agriculture benefiting from the river water in Congo is acceptable. In a previous experience, 800,000 acres in Brazil were cultivated in our favor in 1987. We also tried growing wheat in our favor in America.”

Moghazy reacted on this by stressing that Egyptian agriculture in Sudan will depend on more than one source of irrigation, adding that the 100,000 acres in Damazin currently being cultivated by Egypt and by the Egyptian-Sudanese integration company is based on rain-fed agriculture. He also noted positive steps will be taken to take advantage of rainwater harvesting by building small dams that take advantage of stored water in times of drought.

Moghazy announced in a press conference attended by Al-Monitor on July 29 that the area that is to be cultivated has been increased to 1 million acres instead of 100,000 acres, as had been agreed upon at an earlier stage. This increase will cover the Blue Nile, Sennar and Kassala. Hilal confirmed that this has been agreed upon with officials in Sudan on the sidelines of his visit to Khartoum to attend negotiation meetings about the Renaissance Dam.

Both Allam and Awad welcomed agricultural integration with any state that does not use Nile water, particularly Congo.

On May 30, Moghazy visited Congo to activate the cooperation protocols whereby Egyptian farmers would contribute to the cultivation of land in Congo. Egypt is working to establish a farm in the Menkao area in Malaku city, which lies 70 kilometers (43.5 miles) north of the Congolese capital, Kinshasa. The farm's size will be ​​600 hectares (1,482 acres), of which 300 hectares (741 acres) will be cultivated with crops currently unavailable in Congo, such as corn, sunflowers, soybeans and rice. The farm output will be divided evenly between the two sides.

Cultivating land in developing countries has become Cairo’s way to overcome the water shortage hindering the expansion of agricultural land in Egypt.