Palestinian Authority security services tell Israeli media they arrested a Palestinian woman they believe was going to blow herself up in Israel for the Islamic State. 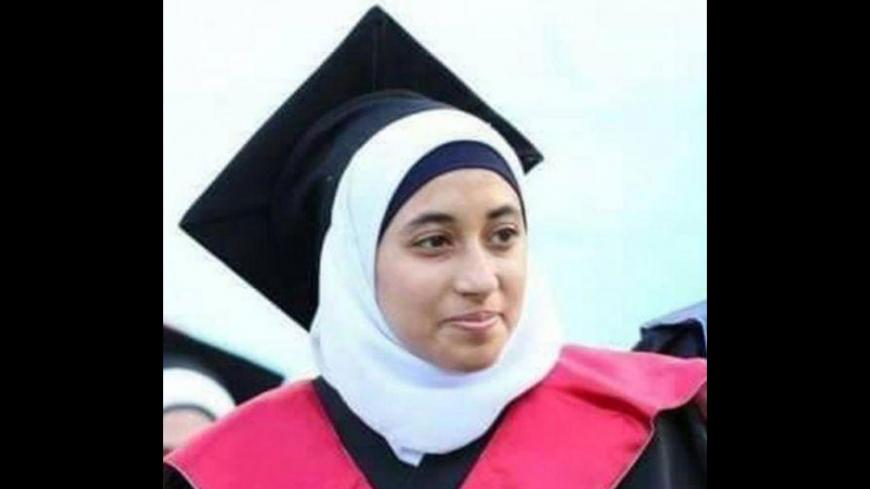 Alaa Bashir, the young woman said to have been arrested by Palestinian security services, is seen in a photo uploaded May 26, 2019. - Twitter/@JoopSoesan

A 23-year-old woman allegedly plotting a solo suicide attack against Israel for the Islamic State (IS) was surrounded by two dozen Palestinian Authority (PA) security officers and arrested while she was teaching the Quran in a West Bank mosque, Israeli news media reported May 26.

The arrest took place May 9. A high-ranking PA security official told the Israeli newspaper Yedioth Ahronoth that security officers arrested Alaa Bashir, who is from Qalqilya in the northern West Bank. Authorities said she was planning to blow herself up inside Israel using a self-made explosive belt.

The newspaper said an undisclosed senior PA source reported Bashir confessed to contacting IS operatives in Syria and the Gaza Strip via the internet using the Telegram instant messaging app. She underwent online training on manufacturing explosive devices, according to the source.

The official didn't specify when Bashir supposedly contacted IS, but said she had previously "expressed solidarity with al-Qaeda and the Salafist movement that operates in the Gaza Strip," the newspaper reported.

"She is a teacher of the Quran who had social problems and had decided to end her life by committing the attack," the newspaper said.

The Palestinian Preventive Security Service arrested Bashir, a graduate of the Islamic Daawa College in Qalqilya, in the Uthman ibn Affan Mosque in Jainsafout. The security service searched her house and confiscated electronic devices belonging to her family members.

On May 13, the security service issued a statement indicating it had received information about entities that had contributed to destabilizing neighboring countries and were exploiting Bashir’s "difficult psychological and social conditions," inciting her to carry out actions that would affect Palestinian security with the help of "outlawed armed militias."

The statement can be interpreted as carrying political and security connotations. The mention of outside entities that had destabilized neighboring countries gives the issue regional dimensions linked to the security situation in Egypt, Syria and particularly Iraq, where IS has been carrying out most of its bloody attacks. Also, PA President Mahmoud Abbas uses the term "militias" in reference to the military wings of Palestinian factions, especially Hamas.

Mahmoud Mardawi, a member of Hamas' national relations bureau, told Al-Monitor, “Bashir’s case has become a matter of Palestinian public opinion as an act of political detention, especially against a woman. We refuse to rely on Israeli sources to justify her arrest. It was not proven that she had any ties with IS or any other Palestinian organizations. We call for exerting pressure on the PA to end her arrest.”

But a Palestinian official told Al-Monitor on condition of anonymity, “The PA has confidence in the performance of its security systems. Apart from the details of Bashir’s case, we are convinced that the West Bank is targeted by hostile parties seeking to spread chaos, including IS and its splinters. We must be alert to these plans. The Palestinian security system ought to issue an official statement instead of leaking the news to the Israeli press.”

Bashir’s arrest provoked a string of Palestinian reactions in addition to the criticism leveled by Hamas. A social media solidarity campaign under the hashtag “We are all Alaa Bashir” calls for her release.

In its May 13 statement about Bashir, the security service indicated it had interrogated her and referred her to the attorney general's office to take the necessary legal action against her.

Islam Shahwan, a security sciences professor at Al-Awda University College in Gaza, told Al-Monitor, “Bashir’s case has two aspects. The state of [repression by security forces] prevailing in the West Bank may generate counter-reactions under the veil of IS against the practices of the PA. Also, accusing Bashir could be a fabricated excuse to justify the continued prosecution of the PA opposition.”

He said, “By arresting Bashir, the PA sought to send messages to Israel that it is keen on its security. Amid the global war on IS, the PA is seeking to gain regional and international support.”

Meanwhile, Bashir’s defense team confirmed May 27 that she was only being prosecuted on the count of "inciting racial strife." The team said the exact nature or details of the charges aren't clear. In a May 13 press release, the team accused the security service of putting up obstacles and preventing Bashir from meeting with her lawyers.

On May 18, the UK-based Arab Organization for Human Rights said it was holding the PA responsible for Bashir’s safety and warned PA security services against torturing her into making false confessions.

Sari Orabi, a Palestinian expert on Islamist factions, said IS ideology has spread in the West Bank, though to a limited degree.

“Israeli prisons include many detainees influenced by IS who planned to carry out attacks against Israel,” he told Al-Monitor. “These have not formed into full-fledged groups in the West Bank. They are individuals who were influenced by IS and may have contacts outside the borders.”

Hassan Asfour, a former PA minister of civil society organizations, wrote for the Amad news website May 27, commenting on the oddity of the security service statement's wording and its ominous tone about "thwarting a military attack on Israel by arresting IS operative Alaa Bashir.” He said the collaborative release of information “reveals the increased security coordination between the PA and Israel" that will confer to Israel “a security and political legitimacy to launch a new war on the Palestinian people under the pretext of fighting IS.”

There are many reasons behind the suspected presence of IS sympathizers in the West Bank. These include an absence of a credible religious platform and advocacy for Palestinians after the PA beefed up its control of mosques and suppressed religious and partisan advocacy platforms.

Emad Abu Awad, an expert on Israeli affairs at the Vision Center for Political Development in Turkey, told Al-Monitor, “Israel doesn't [really] believe IS has any presence in the West Bank, since [IS] has yet to claim any attack against it. Israel, however, fears the collapse of the PA would have security implications and allow IS to emerge in the West Bank amid the presence of some Palestinians who adopt IS’ ideology.”

Bashir’s detention is not the first of its kind. In January 2017, the PA arrested a cell of 22 young men from the West Bank for allegedly having ties with IS. As with Bashir, authorities said they feared the cell was going to carry out operations against Israel and the PA, even though there has not been a single IS attack against Israel to this date.

Suha Jbara, a 31-year-old mother of three and former New Jersey resident, was let go in January after being held and allegedly tortured for two months in a Palestinian jail on suspicion of funding “illegal organizations” and “collaborating with the enemy.” She was released after she staged a 27-day hunger strike.