The rescue of two boys, ages 4 and 5, from a forest brought a modicum of hope the day after May Day to Turkish union members and others who have seen their buying power dwindle and are still seeing the nation's governing party trying to reverse the results of the March 31 Istanbul mayor election. 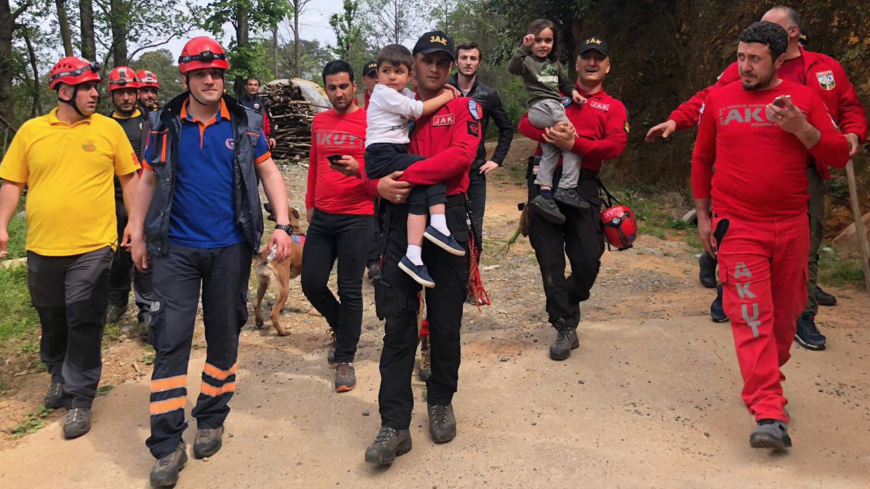 Two boys who had gotten lost the day before are carried out of a forest by rescuers, May 2, 2019. - TWITTER/Jandarma

ANKARA, Turkey — Two young boys were playing in a park on the outskirts of their village in northeastern Turkey when something drew them into the adjacent forest. One interesting item in the forest led to another and, when the boys finally tried to turn back, they found they were lost.

Their parents called for them, got no response and had no idea where they were. By Wednesday night teams of police and volunteers in Findikli, Rize province, were scouring derelict buildings with flashlights for Selim Yagiz Ozkan, age 4, and Baris Yildirim, 5. From minarets, clerics called on people to join the search, and hundreds responded.

This morning, two rescue dogs, an Alsatian and a golden retriever, led their handlers to some undergrowth on a hillside where Selim and Baris had spent the night.

“When they heard the dogs, they stood up and shouted,” a villager, Ibrahim Sari, told the media. “We heard them from afar. ‘Don’t worry! We’re coming,’ we said.”

Seventeen hours after they disappeared, the boys were carried down a mountain road to be reunited with their parents. Television channels showed the boys being passed from red-jacketed rescuers to their mothers, overwhelmed with relief. The residents spoke of their pride and joy, and the rescue team posed with its dogs.

The boys were in good spirits. Their night in the forest seemed to have left them with no more than dirty faces.

“We played during the night,” said Selim. “There were monsters. I wasn’t scared. I slept.”

NTV showed viewers an aerial photograph of Findikli, with a dotted line from the park to where they were found. The boys had wandered no more than 700 meters (not quite half a mile) from their homes, but they had gone into the forest's recesses.

“I found it very hard to get there,” Sari told Hurriyet newspaper. “It’s interesting that the kids did it.”

Selim’s father, Serkan Ozkan, spoke of how the villagers had rallied round: “Findikli residents claimed my child as their own and they looked for him until the morning.”

The governor of Rize, Kemal Ceber, gave credit to the police, the professional rescue teams, the volunteers and the dogs. “These two dogs are the best in Turkey,” he said. “They scored the highest points in all the competitions.”

Turkey is going through a hard time. Food prices have risen 30% year on year. The insurgency of the Kurdistan Workers Party drags on, with funerals of soldiers every week or so. More than four weeks after the local elections, the Supreme Electoral Council has yet to decide whether the result in Istanbul will stand or there will be a new election.

But the rescue of Selim and Baris gave citizens a good feeling. Some things in Turkey still work well.

In a separate development, Istanbul prosecutors have summoned 100 electoral officials in connection with 32 cases of alleged irregularities in polling stations across the city March 31, the state-run Anadolu Agency reported today.

The investigations are largely focused on the districts of Maltepe, Atasehir and Kadikoy, the agency added.

The winner, Ekrem Imamoglu of the opposition alliance of the Republican People’s Party (CHP) and the Good Party (Iyi), took office more than two weeks ago. But the AKP and MHP have continued to file complaints with the Supreme Electoral Council, calling for the election to be re-run.

The Hurriyet newspaper reported that prosecutors were asking the electoral officials about the counting of votes, the division of labor among their colleagues during the count, and whether the signatures on the tally sheets were genuine.

The AKP-MHP alliance maintains there were glaring irregularities in the Istanbul election and these must be addressed. The CHP-Iyi replies that when the election was held, both the city and central government were in AKP hands, and that the time for challenging the voters’ roll has passed.

By appealing to state prosecutors, the AKP-MHP alliance seems to be raising the stakes, making it more difficult for the Supreme Electoral Council to strike down their request for a new election. However, the members of the council are themselves judges.

Every week journalists hear that the council will rule on the request for a new election in three or four days. But the decision keeps on being postponed.

The third event making the news was the May Day demonstration Wednesday. This tends to be wrestling match between pro-opposition unions and government.

The unions say that, on the only day of the year dedicated to workers, they should have the right to march wherever they want. In Istanbul, the workers want to march to Taksim Square, the city’s center and the traditional focus of May Day rallies for decades until the AKP came to power in 2002.

The AKP government has long tried to confine the May Day protests to the suburbs, keeping the workers out of Taksim Square, arguing this is necessary for “security reasons.”

On Wednesday, an estimated 250,000 workers gathered in the marketplace of Bakirkoy, a suburb far from Istanbul's center, an official of the Confederation of Public Workers' Unions (KESK) told Al-Monitor. In Ankara, about 10,000 workers marched 2 kilometers (1.2 miles) on the perimeter of the city center from the Ataturk Cultural Center to Tandogan Square.

The four biggest unions — KESK, the Confederation of Progressive Trade Unions of Turkey (DISK), the Union of Turkish Chambers of Engineers and Architects and the Turkish Medical Association called the rallies, saying their theme was to oppose the government’s plans to abolish severance pay for civil servants who are laid off.

“The economic crisis should not be used as an excuse for layoffs,” the leader of DISK, Arzu Cerkezoglu, told the Istanbul rally. “Working hours should be reduced and the right to strike must be fully recognized.”

She criticized the government for prohibiting the workers from entering Taksim Square, which was surrounded by portable barriers Wednesday.

One group of workers did try to reach the square. The police quickly overwhelmed them, making 145 arrests.

The newly elected mayor of Istanbul, Ekrem Imamoglu, came with his wife, Dilek, to Bakirkoy. “I hope to celebrate May 1 in our city, freely and happily, on a day when we are all together,” he said.

Television channels showed Erdogan making a May Day speech in his sumptuous 1,150-room palace. He had invited 170 workers to dinner. They included three workers who had recently received plaudits for exceptional acts: a fireman from Rize who had revived a dog, a worker from Sanliurfa who designed a bicycle for mentally disabled people and a cleaning worker from Duzce who found a bag full of money and took it to the police.

“I am a president who began his career as a public transportation driver. That is why I see May 1 as my special day,” Erdogan said.