If major international players could find a common interest in a stable Libya, they might see a simple way out of the seemingly endless wars of post-Gadhafi succession, yet they continue to back opposing factions in Libya. 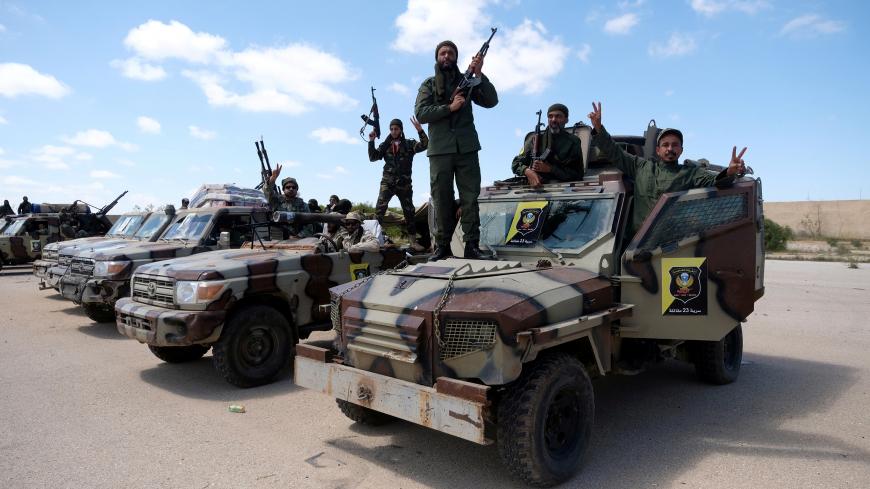 Libyan National Army (LNA) members, commanded by Khalifa Hifter, pose for a picture as they head out of Benghazi to reinforce the troops advancing to Tripoli, Benghazi, Libya, Apr. 7, 2019. - REUTERS/Esam Omran Al-Fetori

The war for Tripoli recently entered its second month, and the main global and regional powers have yet to adopt a coherent or unified approach to the conflict. In fact, their recent actions indicate they are willing to tacitly condone Khalifa Hifter’s offensive by not rallying together to oppose it.

Is this because Hifter’s international backers are more passionate in their support of him than his opponents are in their opposition? That is certainly part of it. The main story appears to be the inertia of his opponents and the sunk cost fallacy of his backers.

The second war for post-Gadhafi succession

On April 4, Hifter’s self-styled Libyan National Army (LNA) commenced Operation Flood of Dignity to “liberate” Tripoli from militias aligned with the Government of National Accord (GNA). It is useful to see this current conflict as the second part of an ongoing war of post-Moammar Gadhafi succession. It began in the summer of 2014, when one side tried to use force to control key chokepoints in Tripoli and nullify election results, while the other declared its intention to purge Libya of Islamists altogether.

The principles of Libyan wars

The first phase of the war demonstrated that no single group or ideological coalition is capable of consolidating control over the whole country nor making a definitive breakthrough in the capital, which would give it unfettered access to Libya’s purse strings and a strong claim to sole international legitimacy. It also revealed that this war is fought according to uniquely Libyan principles, in which all sides are cautious to avoid, as well as to inflict, casualties.

Given the propensity for stalemate in the Libyan way of war, foreign powers’ decisions vis-a-vis promoting a mediated solution or offering certain levels of support for different sides and factions are likely to be decisive in determining which actors emerge victorious. Since Libya is a penetrated system with an enduring internal balance of power, outside actors can tip the otherwise-balanced scales between warring coalitions.

The rigidity of international actors

Tragically, given its ability to make a difference, the international community remains divided, with Hifter’s backers finding themselves "along for the ride," and his opponents sticking to their wait and see approach. His biggest backers — France, Russia, the United Arab Emirates and Egypt — have wisely made it known over the last weeks that they did not support the timing of Hifter’s offensive. Likely they opposed its clumsy optics — it began just before the slated UN-backed National Conference, making it clear that Hifter never had any intention of accepting either the will of the international community or a negotiated compromise with other Libyan factions. And yet, they appear unable to simply abandon Hifter and close ranks with his international opponents and impose meaningful sanctions. This may mean they are operating under a sunk cost fallacy.

Outside support is likely key to the battle for Tripoli

Thus far, with most international actors expressing their support or condemnations at arm’s length, the first month of fighting indicates that the LNA can only win and hold Tripoli with extensive air support from Egypt or the UAE, special forces/reconnaissance support from either Russia or France, and the international community allowing the LNA and its backers to deny Turkey, Italy and Qatar the opportunity to resupply and promote unity among the LNA’s opponents.

Part of those conditions for an LNA victory might be coming into being. The UN Security Council held an emergency session on Libya on May 10, and no meaningful resolution emerged. This is a tacit acknowledgement that, due to prior Russian and American blocking of two British resolutions, it will be impossible for the UN to differentiate between aggressor and the defenders in the conflict and that all the international community can merely offer is a return to the political process fostered by the UN Support Mission in Libya, without penalizing either side.

Europe has given Sarraj the cold shoulder

Last week, Prime Minister Fayez al-Sarraj conducted a tour in Germany, France, Italy and the UK, seeking public condemnations of the LNA’s aggression against Tripoli and the exclusion of Hifter from future political processes. These were bold demands, and he appears to have not offered sufficient concessions to gain traction. French President Emmanuel Macron and German Chancellor Angela Merkel rebuffed Sarraj’s stance, and requested that he return to the terms initiated by the March “Abu Dhabi Agreement” — a political settlement endorsed by Hifter, calling for presidential and legislative elections by the year’s end.

By failing to explicitly support Sarraj’s demands, the UN Security Council and European nations appear more willing to forgive Hifter’s military advance than the GNA’s ongoing inadequacies as a functional government. Therefore, the GNA, a direct product of the international community, is now being abandoned by it. This is not actually playing out as a change of policy, but as the byproduct of all the actors being led by the momentum and inertia of their current policies. When Hifter made small transgressions and violations of previous agreements, the neutral parties like the United States, the UK and Germany did not chastise him. Therefore, as Hifter’s aggression has increased, these actors have been trapped by their preexisting policy inertia.

In proxy conflicts, the tail frequently wags the dog

A study of proxy conflicts in the Middle East suggests that outside backers become likely to feel "pinned in," at the "mercy of their clients," and that "the tail wags the dog." The most obvious example is Syria. President Bashar al-Assad frequently defied his Russian counterpart Vladimir Putin’s warnings against escalations and chemical weapons. Assad grasped that Putin couldn’t "abandon" him — such an action would mean the collapse of the Syrian regime and hence the complete evisceration of Russian influence in Syria. A similar dynamic exists in today’s Libya. The UAE, Saudi Arabia and Egypt have explicitly stated that their goal is to rout the Muslim Brotherhood in Libya as part of their efforts to purge it from North Africa entirely.

These backers are likely to disagree with the timing and tactics of Hifter’s offensive and to have reserved some choice words for him in their private conversations. But they still seem forced to back him. A decisive defeat for the LNA at the gates of Tripoli, and the ensuing collapse of his influence throughout Libya, would mean a resurgence of exactly those Libyan actors to which Hifter’s backers are ideologically anathema.

Sunk costs and the fear of being bold

Does this mean they will back him to the hilt so he can win decisively? I think not. The cost for various actors to be "caught" altering the balance of power in Libya is high for certain actors (France) and medium for others (Egypt) and fairly low for Hifter’s more brazen supporters (UAE and Russia). Moreover, Hifter has shown that he is mercurial, vain and loyal to no one. Given the dangers of decisively supporting one side, it could be that his allies want to prevent Hifter’s collapse, while making sure that if he won he would be beholden to them and not go rogue.

This means that they are part of a long list of countries, the United States included, who seem to want to play both sides of the conflict and are governed by a very strong sunk cost fallacy and policy inertia — unwilling to switch positions due to ingrained bureaucratic approaches, while also unable to garner sufficient political will to double down. If the main international players would look past their sunk costs and find a common interest in a stable Libya, they might see a fairly simple way out of the seemingly endless wars of post-Gadhafi succession: denying all sides access to external sources of funding and arms, while also forcing the Libyan central bank and the internationally recognized government to eliminate subsidies and cut salaries to militiamen on all sides.