Although Libyan strongman Khalifa Hifter has often been perceived as a secular leader, his Libyan National Army contains many Salafi fighters. 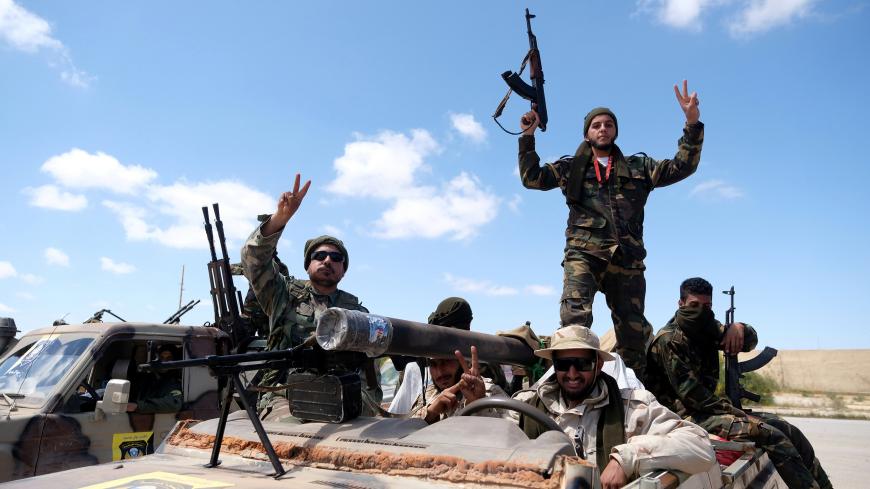 "The LNA military attack on Tripoli and the subsequent escalation in and around the capital constitutes a threat to international peace and security and further threatens the stability of Libya," the statement read.

Fighting between his Libyan National Army and its enemies since early April has killed roughly 400 Libyans, displaced at least 50,000 and severely damaged several of Tripoli’s southern districts. Despite the EU warning and calls earlier this month from the United Nations for a weeklong cease-fire on humanitarian grounds, Hifter does not believe that the holy month of Ramadan is reason for a temporary truce. In fact, the eastern commander is now invoking Islamic references in calling for a “jihad” against the Libyan National Army’s enemies in order to rally his forces for an intensified period of fighting during Ramadan.

This religious language from Hifter, who is allied with Libya’s “secular” Tobruk-based House of Representatives, must be largely understood within the context of the commander attempting to reach out to and mobilize more Salafists/Madkhalis against militias in Misrata and Tripoli that are loyal to the UN-recognized Government of National Accord. Hifter’s rhetoric and alignments are illustrative of the countless contradictions and complicated dynamics shaping the Libyan civil war. That a host of states — namely the United Arab Emirates and Egypt — have backed Hifter on the premise that only his forces can counter violent extremism is unquestionably paradoxical. Important to note is that there are major differences between Libyan Salafi groups, with some in Hifter’s camp and others against him.

Assuming the Libyan National Army’s offensive on Tripoli fails to result in a decisive victory for Hifter, who seems determined to capture control of every inch of Libyan soil, a bloody stalemate may ensue in the beleaguered Maghrebi country. Both sides will attempt to sell the world their version of reality in a war of narratives about which side in the conflict is truly fighting extremism and terrorism. Increasingly clear is that Hifter may conduct himself in manners that do not reflect the ideological agendas or preferences of some of his state sponsors. To be sure, Egypt has never enthusiastically welcomed the incorporation of armed Salafi groups into Operation Dignity, which Hifter launched in mid-2014. At the same time, it is difficult to imagine officials in Abu Dhabi appreciating the commander’s rhetoric about Ramadan being the “month of jihad” in Libya.

Nonetheless, to Hifter’s credit he has thus far been rather successful in downplaying the Salafists’ major roles in his military operations. This has been necessary for the commander mainly because of his efforts to sell himself as leading a legitimate Arab army fighting to eradicate radical Islamists in order to establish a secular Libya. Nonetheless, the reality is that pro-Hifter Salafi fighters have done a lot of heavy lifting for the Libyan National Army and endured a high number of casualties throughout this five-year civil war. Moreover, these Salafists have integrated themselves into the Libyan National Army’s regular units as well as the security apparatus in Benghazi.

Yet from the standpoint of those interested in a pluralistic, tolerant, and democratic future for Libya, it is alarming that in mid-2017 the UN Panel of Experts on Libya documented how certain Salafists fighting in the ranks of Hifter’s coalition had called for executing “apostates.” If true, the accusations that the Libyan National Army permitted Islamic State (IS) fighters to quietly escape from Benghazi to Bani Walid — as well as Hifter’s recent admission in a France 24 interview that he used to order his forces to return Tunisian IS fighters to their countries of origin — must alarm Hifter’s foreign sponsors, which, to varying degrees, have bought this notion that the Libyan National Army is Libya’s sole force to combat terrorism. Such confusion and blurry lines on the ground highlight how difficult it is for foreign powers to control their allies and clients in Libya. This lack of clarity also demonstrates the need for nuance when discussing Libya’s myriad actors as terms such as “secular” need to be defined within this country’s context, as even Hifter invokes religious rhetoric for political purposes.

Concerns about excessive Salafi influence in the Libyan National Army already prompted Hifter to dismantle one eastern Salafi group, Tawhid, which previously belonged to his coalition. But looking ahead, it is questionable whether Hifter can continue such a delicate balancing act. Clashing visions on the part of Libyan National Army — allied Salafists and the Libyans who began supporting Hifter because they wanted an end to Ansar al-Sharia, as well as the foreign states that have backed the Libyan National Army in order to eradicate Islamist militias from the scene in Libya, could be extremely difficult for Hifter to manage politically.

In this chaotic and multifaceted civil war, the dividing lines between “legitimate” or regular fighters and “illegitimate” or irregular militants/terrorists are far from clear. Doubtless, as Salafists continue challenging state institutions in Libya while imposing their beliefs on communities that practice more tolerant and peaceful versions of Islam, it is almost inevitable that such ultra-conservative groups will seek to transform Libya in many ways, stretching across the domains of religion to security and politics. For now, these Salafists on Hifter’s side have earned the eastern commander’s praise for their courage and discipline in past battles. But these groups are also perceived as a major threat to various ethnic, religious and political groups in the North African country, including Sufi Muslims, the Amazigh community and the Muslim Brotherhood.

As the Libyan war rages on, Salafists under the Libyan National Army umbrella will probably become increasingly difficult for Hifter to mask. The odds are good that fears of pro-Hifter Salafists will further mobilize actors loyal to the Government of National Accord to prevent the Libyan National Army from achieving further gains. Regardless of the outcome of Operation to Liberate Tripoli, the Salafi phenomenon in Libya is set to continue and become an issue that Hifter’s regional and international allies will likely have to eventually address. Sooner rather than later the Libyan National Army’s backers in Abu Dhabi, Cairo, Paris and Riyadh should begin asking themselves whether Hifter is combating, or absorbing, dangerous extremists.