Jordanian King Abdullah seems keen to unite the domestic front ahead of the unveiling of the US peace plan, despite past differences with the Muslim Brotherhood. 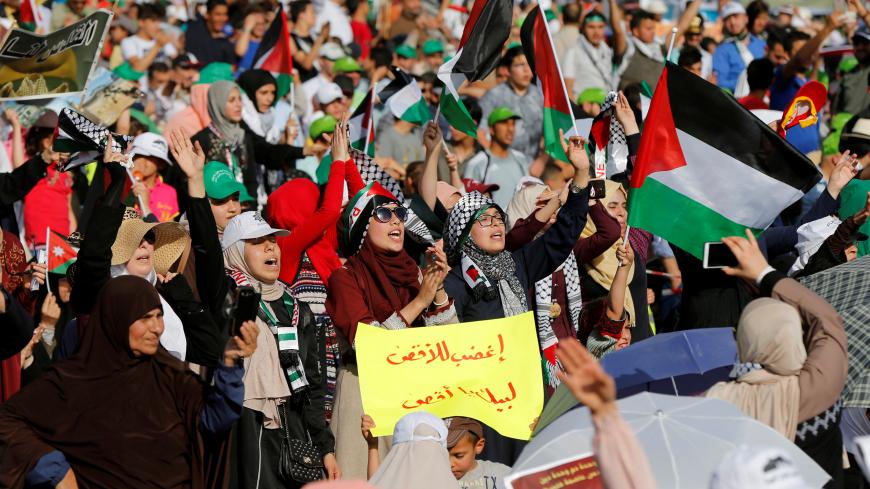 Supporters of the Jordanian Muslim Brotherhood and Islamic Action Front hold Palestinian flags and shout slogans during a rally to mark the 70th anniversary of the Nakba in the Jordan Valley, Sweimeh, Jordan, May 11, 2018. - REUTERS/Muhammad Hamed

As the US administration looks into the possibility of designating the Muslim Brotherhood a terrorist organization, one of the countries that will feel the backlash — if that decision is made — will be Jordan. The Muslim Brotherhood is represented in parliament through its political arm, the Islamic Action Front (IAF), which has allied itself since 2016 with nationalist figures in a broad coalition. Al-Islah bloc is now the largest opposition group in the Lower House with 16 members.

But after more than seven years of ruptured ties between the Muslim Brotherhood and the royal palace, King Abdullah met April 16 with members of the bloc for the first time. In a statement to Arabi21.com, member of parliament Saleh al-Armouti described the meeting as “historic and positive,” representing “a new phase in relations between the group and the palace.” He said the meeting dealt with three files: Jerusalem, the US "deal of the century" and the legitimacy of the Muslim Brotherhood. He thanked the king for not labeling the group a terrorist organization.

Abdullah has been holding meetings with lawmakers, politicians and media figures since his return from the United States in mid-March. During these meetings, he made his position clear in rejecting any compromise over his custodianship of Muslim and Christian holy places in Jerusalem, any deal that would turn Jordan into an alternative homeland for the Palestinians and attempts to settle Palestinian refugees in host countries.

His meeting with Islamist lawmakers was seen as a move to solidify the domestic front ahead of the release of President Donald Trump’s peace plan in June.

Speaking to Al-Monitor, spokesman for the Brotherhood Muaz al-Khawaldeh praised the king’s position on refusing to designate the group as a terrorist organization. He described the relationship between the palace and the group as “mature,” adding that it is anchored in democratic, civil, reformist values.

“We don’t care about the US stand. What we care about is the position of the political leadership in this country toward what is an intrinsic part of the national fabric,” Khawaldeh said.

Writing in Addustour daily on May 2, Oraib al-Rantawi, a political analyst and the director of the Amman-based Al Quds Center for Political Studies, said that the US move will come at an inappropriate time for Jordan. “The kingdom had resisted pressure in the past to ban the group and this led to a more moderate and reconciliatory attitude by the Muslim Brotherhood,” he said.

He added, “But now our strategic ally [the United States] is expected to exert additional pressure on us, as if the challenges embedded in the deal of the century are not enough for us to confront. We have to defend our exclusivity as Jordanians through mature and responsible internal dialogue."

Since the 1950s, the movement has been active in the kingdom, first as a charitable organization and in the 1990s through its political arm, the IAF. And for decades it had allied itself with the royal palace against pan-Arab nationalist waves, including that of late Egyptian President Gamal Abdel Nasser in the 1950s and 1960s, with whom it had clashed following the 1952 coup in Egypt that toppled the monarchy.

But that alliance had suffered following the resumption of political life in Jordan in 1989 as the IAF emerged as the largest and most organized bloc in Jordan’s parliament. The government responded in the mid-1990s by annulling the multi-vote system that had benefitted the movement and its candidates. The result had weakened the Islamist representation in parliament but not without fragmenting the power of other nascent political parties. Since then, the IAF had boycotted a number of polls in protest.

But ties between the Brotherhood and the royal court dipped further when the former Brotherhood supported popular protests calling for bold political reforms in the early months of the Arab Spring in 2011. Despite the breakdown in communication, the Islamists continued to make gains in local elections, including professional associations, municipal councils and university student councils.

But when in 2014, Saudi Arabia, Egypt and the United Arab Emirates banned the movement and designated it a terrorist organization, Jordan resisted pressures and refused to do the same.

It was not until the winter of 2015 that internal rifts began to surface inside the Muslim Brotherhood in the kingdom. A number of leading figures split from the group and applied for a new license under the name of the Muslim Brotherhood Society, which the government granted in 2015. That was followed by a shocking declaration in early 2015 by the government that the original group was never legally registered — something that the group had denied.

Between 2015 and 2016, the government appeared to side with the newly registered society against the old group. A number of the Muslim Brotherhood centers across the kingdom were shut down by the government and a legal battle ensued between the society and the group.

But although weakened by the splits, the September 2016 parliamentary elections proved decisive on where Jordanian voters stood. In the end, a coalition of IAF and nationalist members made important gains in the 130-seat Lower House. Its Islamist rivals did poorly. It was an important victory for the old group and their allies.

Since then tensions between the government and the Muslim Brotherhood had noticeably subsided. The geopolitical scene was changing. Trump had won a historic election in the United States. His pro-Israel stands ran directly opposite to Jordan’s national security interests. Abdullah needed to unite the domestic front ahead of the unveiling of Trump’s deal of the century peace plan.

There has been no official reaction in Amman to the planned US move, but news reports spoke of a bipartisan pushback in Congress against it. Analysts here say that labeling the group as a terrorist organization, when there is no credible evidence for that, would damage ties between the United States and many of its allies where the group is legal such as Jordan, Turkey, Morocco and Qatar. Furthermore, it will certainly push many members to go underground and affiliate themselves with more radical Islamist groups — something that Jordan is keen to prevent.