While Jordan is expected to start receiving natural gas from Israel in a matter of weeks, demands that the government cancel the deal are growing. 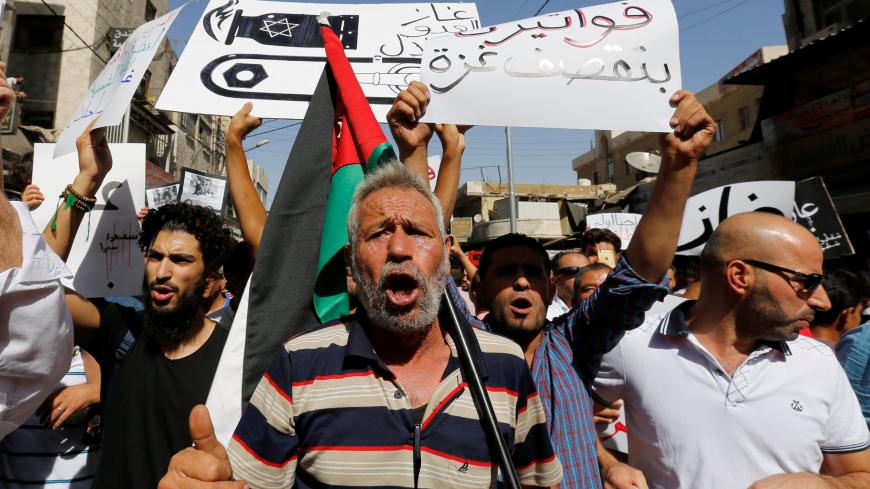 Jordanian demonstrators chant slogans during a protest against a government agreement to import natural gas from Israel, in Amman, Jordan, Oct. 14, 2016. - REUTERS/Muhammad Hamed

Israel will begin exporting natural gas to Jordan through a pipeline within two weeks, Israel’s Energy Minister Yuval Steinitz announced Dec. 3. While there was no official confirmation from the Jordanian side, Dima Tahboub, member of the Islamist-dominated Al-Islah bloc at the Lower House and a critic of the gas deal between Jordan and Israel, tweeted Dec. 6 that the countdown has begun for “the enemy to take hold of” our energy. She said her bloc will submit a draft law soon to bar the import of “gas from the Zionists.”

The controversial $15 billion, 10-year contract between Jordan National Electric Power Company and an Israeli-American gas consortium signed in 2016 has been criticized by lawmakers, professional unions and activists. Online campaigns have been launched on Twitter using the hashtag #StopGasDeal, and protests were staged in Amman and other governorates as a pipeline was being built between Jordan and Israel.

When Jordanian lawmakers demanded that the Lower House review the agreement, the former government of Prime Minister Abdullah Ensour first said the contract needed to be translated into Arabic. Then, on Oct. 12, 2016, government spokesman Mohammad al-Momani said the deal was signed between two corporations, American and Jordanian, and not between two governments, and did need parliament’s approval.

Pressure continued on the current government of Prime Minister Omar Razzaz to reveal details of the agreement. On Sept. 16, Jordan’s Constitutional Court ruled that the agreement does not need parliament’s approval. The official text was never released as public record.

This was a rebuff to lawmakers who on March 26 had renewed their rejection of the agreement and called on the government to cancel it. The last protest against the deal took place Nov. 28 near the prime minister’s office, where lawmakers and activists issued what they called a “final appeal” to cancel the agreement, which they said is a form of occupation. On Nov. 30, the head of the Lower House’s Foreign Relations Committee, Raed Khazaleh, called for putting everyone who had a hand in the signing of the agreement on trial. He also claimed there were secret clauses in the agreement.

On July 3, the head of Al-Islah bloc in the Lower House, Saleh al-Armouti, claimed to have obtained a translated copy of the agreement, and according to him, there are provisions that allow the government to cancel the deal without paying a $1.5 billion penalty. He also accused the government of misleading citizens over the exact party that will sell the gas to the national power company. Armouti said the deal was signed between NBL Jordan Marketing and the government-owned power company. According to him, NBL Jordan Marketing is a subsidiary of the US firm Noble Energy, which is registered in the Cayman Islands, and headquartered in Herzliya, near Tel Aviv.

Observers here believe tension between opponents of the deal and the government will heighten once the pumping of natural gas begins. The timing could not have been worse as relations between Jordan and Israel have reached a new low. On Nov. 22, King Abdullah II said the relations between the two countries, who have failed to mark the 25th anniversary of the signing of their peace treaty, “were at an all-time low.”

Certainly his remarks underlined the growing public anger at Israeli policies in East Jerusalem and the West Bank. Abdullah warned Israeli Prime Minister Benjamin Netanyahu in September against carrying out an election pledge to annex the Jordan Valley. The king said such a step would have a negative impact on the peace treaty between the two countries.

Jordanians also expressed doubts over the need to import gas from Israel as the government has said the kingdom has a surplus of electricity and is seeking to export energy to Iraq, Syria, Palestine, Lebanon and even Europe.

Energy expert Amer al-Shoubaki told Al-Monitor that natural gas is used primarily to generate electricity, but statistics show that Jordan’s average daily need of electricity is 2,500 megawatts, with a maximum load of 3,300 megawatts in the summer. “But our daily production is now estimated at 4,300 megawatts and thanks to renewable energy and shale oil our production will reach 5,000 megawatts daily, so there is no economic logic behind importing natural gas from Israel,” he said. “As more households and factories switch to renewable energy, our consumption of gas-generated electricity actually went down last year by an average of 1 gigawatt per hour,” Shoubaki added.

The government never justified the reasoning behind entering into such an agreement despite the availability of alternatives such as Egyptian and Qatari natural gas; pundits here believe US pressure was the main factor behind the deal.

Oraib al-Rantawi , the head of Al-Quds Center for Political Studies, told Al-Monitor that opposing the gas deal with Israel is in line with the kingdom’s most crucial national security priorities. “Jordan expects the worst from right-wing Israeli governments, as we have seen during the past few years, so it makes no sense to increase our dependency on Israel in two strategic areas; water and energy,” he said. “We should oppose this deal out of our own national interest even as we are pressured by the Americans to embrace it, but I doubt that the government is serious about reversing its position.”

Meanwhile, Armouti told Al-Monitor that the agreement is between two countries and not two companies, and that there are “mines in this deal that will explode in our faces once it is implemented.” He said, “One article allows the government to end the agreement without paying a penalty and that is if there are legal obstacles that prevent the construction of the pipeline. Well, there are lawsuits against the government by landowners whose lands were expropriated for the pipeline; that is a legal pretext to end the agreement.”

Once the Israeli gas begins flowing in a few weeks’ time, public protests are expected to resume. Yet no signs indicate that the government is looking into renegotiating or canceling the agreement despite a promise by Abdullah, when he met members of Al-Islah bloc in April, to ask the government to review the deal.