Jordanians have taken to the streets in opposition to a deal quietly reached between Jordan and Israel to supply the kingdom with energy, with critics saying the agreement will validate and increase reliance on Israel. 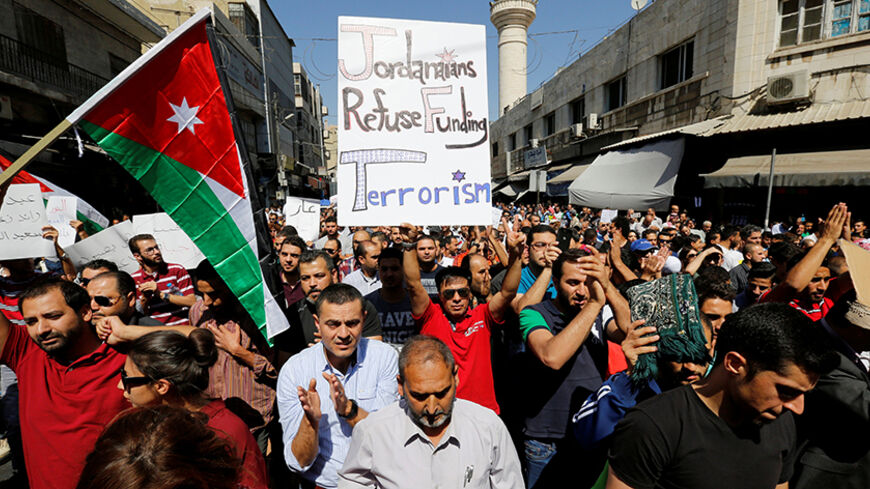 Jordanian protesters carry the Jordanian national flag and chant slogans during a protest against a government agreement to import natural gas from Israel, in Amman, Jordan, Sept. 30, 2016. - REUTERS/Muhammad Hamed

Not since the popular demonstrations of the Arab Spring in 2011, when protesters demanded political reforms, have Jordanians come together behind a common cause. This time, they rallied to denounce the signing of an agreement between Jordan’s National Electric Power Co. (NEPCO) and a US firm, Noble Energy, which is responsible for developing Israel’s largest offshore gas field. The $10 billion, 15-year deal was announced Sept. 26, almost a week after the kingdom held national legislative elections on Sept. 20 and more than a month before the new parliament is scheduled to convene.

The agreement to supply NEPCO with 300 million cubic feet of natural gas per day — almost 3 billion cubic feet annually— will go into effect in 2019. This figure represents 40% of NEPCO’s liquefied natural gas needs. The company supplies the gas to local electricity companies, which generate 85% of the kingdom’s power. Details regarding responsibility for building the pipeline between Jordan and Israel and its cost have not been disclosed.

The Jordanian branch of the boycott, divestment and sanctions campaign against Israel released a statement Sept. 28 expressing outrage and opposition to the deal. It reminded the government that Lower House deputies had voted overwhelmingly in December 2014 to reject the deal and cancel a memorandum of understanding between the two sides.

It now appears that the agreement was renegotiated in secret in spite of the Lower House’s objections.

The announcement came as a surprise, as the issue has not been discussed publicly since 2014. The public reaction was immediate. Political parties, professional unions, civil society organizations and individuals denounced the deal and expressed outrage at what they saw as a move toward normalization with the “Zionist entity" and a "robbery of Palestinian natural resources,” according to head of the Anti-Normalization Committee of the Union of Professional Associations Ahmad al-Armouti.

Jordan signed a peace treaty with Israel in 1994, but the majority of Jordanians continue to oppose it. The Islamic Action Front, the Muslim Brotherhood’s political arm, issued a statement Sept. 28 rejecting the agreement, saying that it represents “reliance on the Zionist enemy" and "support for occupation.”

The general coordinator for the National Campaign to Nullify the Gas Deal with the Zionist Entity, a nongovernmental popular movement supported by professional unions and civil society organizations, told local journalists Sept. 27, “There is suspicion of corruption [in the deal] and that the government should have invested the $10 billion on alternative energy sources.” Hisham Bustani, whose national campaign is being run under the slogan “The Enemy’s Gas is Occupation,” claimed that the cost of the “stolen” natural gas coming from Israel is higher than international prices.

On Sept. 30, thousands of Jordanians joined demonstrations all over the kingdom following Friday prayers. Marches took place in downtown Amman and in cities such as Irbid in the north and Kerak in the south. Demonstrators called on the government to cancel the deal, which they labeled as a form of normalization with “the Zionist occupation.” In the Bekaa Palestinian refugee camp, north of Amman, protesters clashed with riot police. Similar clashes were reported elsewhere.

The government took some time to respond to the criticism. On Oct. 3, government spokesman Mohammad al-Momani told Jordan state television, “The gas agreement with Israel is based on Jordan’s strategic decision to diversify energy sources and does not create dependency on Israel.” He added, “It is superficial to say that by signing the deal we are supporting Israeli occupation. Our positions that reject occupation are clear.”

Momani said Jordan had lost $6 billion when Egyptian gas supplies were cut off in 2014, when extremists blew up the pipeline linking Sinai to Aqaba, and that the deal with Israel will save the treasury around $600 million annually. He accused critics of politicizing the issue.

But strategic analyst and director of the Middle East Center for Policies and Media Amer Al Sabaileh disagreed. He told Al-Monitor that while the deal is purely commercial in nature, it limits Jordan’s energy choices and that “such reliance [on Israel] could turn into a political weapon in the future.”

He added that popular rejection will turn into pressure on the government and may lead to public disobedience. “This is an example of how decisions are made in closed rooms and without transparency. Jordanians found out about the deal from Israeli news sources.”

But the government’s position has been defended by some economists and politicians. Salameh Darawai, economic analyst and editor of the website Maqar, supports the deal as a purely commercial venture “in light of very limited government options.” He told Al-Monitor, “The deal will undoubtedly provide the kingdom with a cheap source of energy and this will lead to a decrease in citizens’ electric bills, especially considering that the country’s energy costs have increased by 170% in recent years.”

Jordan, which imports about 96% of its energy needs, has been working on a strategy to diversify its energy resources. It includes building a nuclear reactor in the eastern desert and investing in renewable energy sources such as wind and solar. Chairman of the Jordan Atomic Energy Commission Khaled Toukan told Al-Monitor that the 2,000-megawatt Russian reactor will come online in 2024 and that it will meet 40% of the kingdom’s energy needs then.

In addition, the country has an estimated shale oil reserve of 70 billion tons and a number of studies have been carried out to evaluate its commercial viability. In March, the government approved an agreement between the National Petroleum Co. and an Egyptian consortium to increase the annual output of al-Risha gas field, near the Iraqi border, to 50 million cubic feet within a year.

But public rejection of the gas deal with Israel is unlikely to ebb soon. Already a number of newly elected deputies have threatened to resign in protest of the deal and vowed to confront the government once the Lower House convenes Nov. 7. They criticized the government’s signing of the agreement when parliament was not in session. While the government is not expected to back down, the deputies’ reactions could keep the issue alive in the public eye for many more weeks.