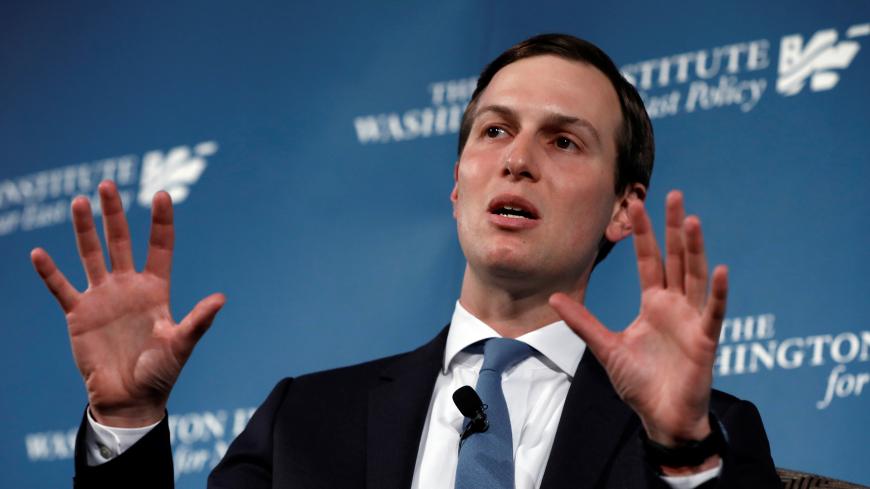 White House senior adviser Jared Kushner, President Donald Trump's son-in-law, speaks during a discussion on "Inside the Trump Administration's Middle East Peace Effort" at a dinner symposium of the Washington Institute for Near East Policy in Washington, US, May 2, 2019. - REUTERS/Yuri Gripas

WASHINGTON — Jared Kushner, President Donald Trump’s son-in-law and senior adviser, said Thursday that the administration was determined to put out its Middle East peace framework, likely next month, shrugging off warnings that its likely rejection by the Palestinians could destabilize the status quo.

“I do think our approach has been, is that if we are going to fail, we don’t want to fail doing it the same way it’s been done in the past,” Kushner said in a conversation with Rob Satloff, the Washington Institute for Near East Policy’s executive director, Thursday night.

“You want to be original in your failure,” Satloff responded, to laughter from the audience assembled for the institute’s annual Soref Symposium in the ballroom of the Ritz hotel in Washington, DC.

But Satloff is among a broad group of experienced Washington Middle East hands who have recently urged the Trump administration to not release its plan — advice Kushner rejected Thursday night.

“It would be a serious mistake for US President Donald Trump to take the still-secret proposals devised by his son-in-law Jared Kushner and his colleagues and issue them in the name of the United States,” Satloff warned in Foreign Policy on April 10. “Issuing the Kushner plan risks triggering a chain of events that would result in a decision by [Israeli Prime Minister Benjamin] Netanyahu to annex parts of the contested West Bank, a step that even the most conservative and nationalist Israeli governments over the past half-century have declined to take.”

Satloff politely pressed Kushner again, in person, Thursday night, on whether his team had sufficiently considered the potential risks of failure versus not presenting the plan at all.

"If we are going to fail, we don’t want to fail doing it the same way it’s been done in the past." — Jared Kushner

Kushner responded that as the son-in-law of the president, he can’t afford to disappoint him, suggesting that the reason the administration is intent on presenting its peace plan is essentially because Trump wants to.

“If you’re in the White House where we are, you're supposed to try hard to solve hard problems,” Kushner said. “And I think that this president is not afraid to fail at things … and he's willing to let us swing big at hard problems as long as we're doing it in a smart and responsible way.”

“I do think that both sides will look at this, hopefully both sides think it’s a serious proposal, hopefully it stimulates discussion … and maybe leads to some breakthroughs that have been elusive for a very, very long time,” Kushner added. “And again, you know, our No. 1 goal is we want the Palestinian people’s lives to get better, and we want Israel’s security to be stronger, and we want both sides to be able to find a pathway to come together and figure out how to bridge some of these previously unbridgeable divides.”

Ori Nir, a former Israeli journalist with Americans for Peace Now, which supports a two-state solution, said he also has urged the Trump administration to hold off on presenting its peace plan. The concern, he explained, is that when it is likely rejected by the Palestinian Authority, it could lead the right-wing Israeli government to declare they have no peace partner and to possibly annex territory in the West Bank.

“I think to publish a plan or a document that does not clearly stipulate a two-state solution as a goal, as an American policy principle, which it has been now for decades, would be a huge mistake,” Nir told Al-Monitor. “Because even if it fails, it will … move the goal posts. That would allow the current incoming Israeli government, which has now made annexation of the West Bank one of its main goals, to pursue that goal, and be able to say credibly that the United States no longer believes … most of the West Bank should become part of a future Palestinian state.”

“I think that they are intentionally putting on the table a plan that will … fail in their own unique way,” Nir continued. “And the way in which it will fail is such that Palestinians bear all the blame. And Israel would be free to say, ‘Look, we tried. The US administration gave it its best shot. They [the Palestinians] don’t want peace. Therefore, we can take unilateral actions at will without paying a price.'"

As for whether Netanyahu really wants to have the United States remove an obstacle to annexing territory in the West Bank, Nir said he thought Netanyahu’s goal was to use the Trump administration’s blessing to cement the status quo.

“I don’t think he wants full annexation,” Nir said. “But he wants to take measures that would cement the status quo, within the maneuvering room he has. He sees an opportunity under Trump to maximize that.”

Khaled Elgindy, a former adviser to the Palestinian leadership, agreed that he saw the Kushner plan as attempting to “normalize the status quo.” But he said he was more agnostic about whether releasing a plan that does not offer the Palestinians the sovereignty they seek would make the situation much worse.

The Trump administration “is only prepared to go as far as the Israeli leadership is prepared to accept,” Elgindy, the author of a new book on the history of US Middle East peace efforts, "Blind Spot," told Al-Monitor. He characterized the US administration’s approach: “Let’s just take the current reality and make it better in some respects, short of calling for Israeli withdrawal or Palestinian sovereignty. I think that is where they are going.”

“And of course … there is less and less movement … how far Israeli leaders have been willing to go over time,” Elgindy said.

“I am conflicted because … I know it is a plan that does not offer Palestinians much,” he said. “On the other side, I see these petitions urging the administration don’t release the plan. I don’t care if they release the plan. I think it is the same either way. … It is not going to move the needle to put it out, and it is not going to move the needle if you don’t. Moving the needle would mean radically changing the situation, not just economically. And I don’t think it’s possible to address the economy without addressing the occupation.”

Kushner on Thursday argued that the Palestinian people have been pawns of various players in the Middle East for a long time, and he hoped that they and their leadership would give his team’s proposal consideration.

“It’s been very disheartening for us to see that the Palestinian leadership has basically been attacking a plan that they don’t know what it is, as opposed to reaching out,” Kushner continued, referring to Palestinian Authority President Mahmoud Abbas and his team cutting off relations with the Trump administration after Trump announced he would move the US Embassy to Jerusalem in late 2017. “If they truly cared about making the lives of the Palestinian people better, I think they would have taken different decisions over the last year, maybe over the last 20 years.”

“The neat thing about this is we’re going to put it out,” Kushner added.