Are Trump, Netanyahu planning to 'buy off' the Palestinians?

Donald Trump and Benjamin Netanyahu are responsible for the dire economic straits of the Palestinian Authority, yet they think that an economic package for the Palestinians will achieve two goals: prevent the PA from collapse and get the PA to accept their terms. 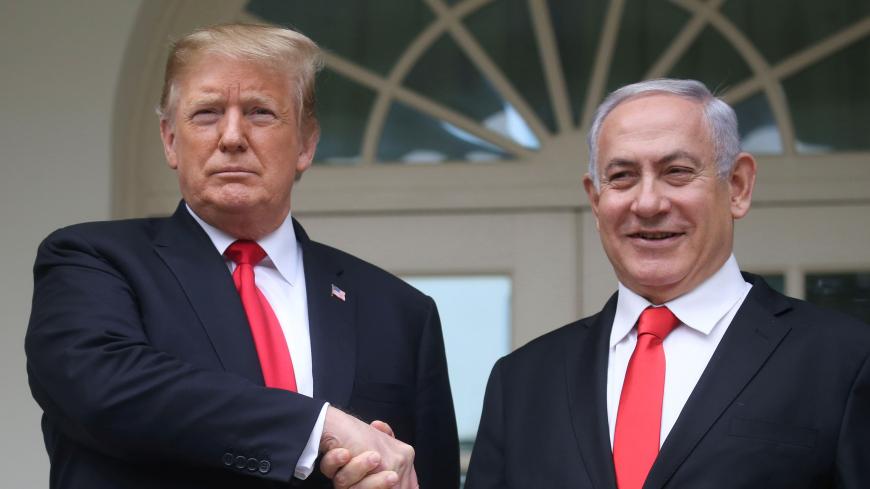 US President Donald Trump shakes hands with Israel's Prime Minister Benjamin Netanyahu as they pose on the West Wing colonnade in the Rose Garden at the White House, Washington, US, March 25, 2019. - REUTERS/Leah Millis

After many years of crying wolf — so much so that it has become a ritual — the wolf may, indeed, arrive. Warnings of the imminent collapse of the Palestinian Authority (PA) go back to the beginning of the PA’s existence in 1993. The threats have gone up and down over the years, but they have always emerged as futile. Every time Israel freezes the PA’s monies, or fines the PA in a one-sided gesture, or tries to economically strangle the PA, the senior PA members emphatically announce that they will simply return the keys and close down the business. In the past, this was avoided at the very last minute. In recent years, even the natural tension that once accompanied these crises has disappeared. No one really took the threats of the elderly PA leader, President Mahmoud Abbas, seriously. But now, for the first time, the threats seem genuine.

A host of mitigating factors has disappeared; checks and balances have collapsed. Both sides cry “help me,” but there is no one to come to the rescue. Prime Minister Benjamin Netanyahu is trapped in the most right-wing coalition that has ever existed, and is thus held hostage by the extremists. President Abbas is dispirited, sick, at the twilight of his tenure and striving for a dramatic way to leave his mark. The world leaders who usually know how to push the two sides into each other’s arms at the right moment are tired of the game. Special circumstances will be needed to avert a free fall.

Once upon a time, Netanyahu operated on behalf of Israeli strategic interests that viewed the survival and functioning of the PA as an important security need. Today, this interest plays second fiddle to Netanyahu’s even more existential need: his own political and personal survival, which depends on his hard-line right-wing partners. These partners hold the keys that will enable him to evade trial (an earlier Al-Monitor article addressed this issue at length). Netanyahu needs his partners to propose some sort of law that would offer him immunity. Bezalel Smotrich, a dominant Knesset member from the United Right party, feels that Israel would benefit from the downfall of the PA and from the chaos that would follow.

Netanyahu is thus dancing to the tune of the most dangerous of the right-wing hawks. And only these hawks can satisfy his strategic needs: the option to remain in his post despite an indictment, or receive parliamentary immunity from an indictment, or both. Until now, Netanyahu was the “responsible adult” who pulled the wagon from the mud at the moment of truth, via machinations in the Cabinet. Netanyahu would make lots of noise, freezing the tax monies that Israel collects for the PA, then would release those funds at the right moment. The freeze would make front-page news, while the thaw would appear in small letters in the back pages. Netanyahu excelled at eating his cake and having it, too.

But the current situation is different. It is not about freezing funds but about Israel’s one-sided offsetting of the funds that the PA pays the families of terrorists and murderers. This is based on a law that the Knesset passed in July 2018 by a large majority. The right-wing coalition passed it with much fanfare but also had the support of many opposition members. There is no doubt that this law is justified and that Israel should not have to accept the transfer of PA funds to those who murder Israelis, including civilians, women and children. The problem is, justice is relative in the Middle East and “doing the right thing” is not always the wise course of action. Deducting monies from the PA may well cause the PA’s downfall and ruin, leading the Israelis to miss the good old days as they frantically try to return the genie to the bottle.

Members of Israel’s security apparatus view this process with great worry. The heads of the various security branches are well aware of the high level and quality of the security cooperation between Israel and the Palestinians; this decisively contributes to the relative security quiet that exists in Israel and the West Bank. In the current political atmosphere, after another strong victory of the right in the elections, high-level personages in the Israel Defense Forces, the army intelligence branch, the Shin Bet and Mossad are conspicuously silent. There is nothing they can do; they know that no Palestinian leader or any future Palestinian leader could ever change the national Palestinian narrative that views past, present and future Palestinian assailants as martyrs who struggle for their nation’s freedom. Over the years, and even though this totally negates all existing humanitarian principles and values, Israel has learned to tacitly accept the situation — until now. No more. Two trains are on a collision course and no one knows how to stop it. As this article is being written, a European emergency forum is convening in Brussels in an attempt to square the circle and reformulate the PA support of convicted prisoners in order to mollify Israel. Its chances of success are modest.

According to some Israeli sources, however, there is a certain amount of hope, even in the current environment of palpable strategic hazards. There was a rather pathetic unilateral Israeli attempt to deposit hundreds of millions of shekels last month (after deduction), in the PA's account, but the PA returned the money! However, there is another glimpse of hope in President Donald Trump’s long-awaited “deal of the century.” By then, the PA may well be on the verge of collapse. The standard of living is deteriorating, unemployment is expected to jump and unrest on the streets will grow. President Abbas is serious about waiving all the tax monies — which constitute a significant portion of the PA’s budget — should Israel continue to deduct from them the monies he pays to the terrorists. At this dramatic moment, when everything is falling apart, the American program will be unfurled. It is believed by Israeli and American officials that the program will include an especially generous international Marshall Plan to rehabilitate the PA’s territories with enormous investments and massive economic assistance. According to this theory, the timing will be perfect. One moment before bankruptcy and chaos, a new option will be presented to the Palestinians that can transform Ramallah and other Palestinian cities into the Middle East version of Singapore.

Is this the way that Trump, Netanyahu and Saudi Arabian Crown Prince Mohammed bin Salman are planning to “buy off” the Palestinian people? Is the deal really an “economy in exchange for a state”? Billions as compensation for full sovereignty? Stop trying to wear us out about your “right of return” and grab this opportunity for the good life, improved standard of living and hope? Forget about East Jerusalem and settle for a Western economy!

Perhaps. The problem is that anyone who is really familiar with the people involved knows that the chances of success are very low, at least in the current generation. Will Crown Prince Salman really wave $10 billion in Abbas’ face, or will the bills remain in his pocket? It is doubtful whether, at this stage, it will be possible to buy off Palestinian honor with big bucks.