Iraqis are making it clear that they want no part in the regional conflict surrounding Iran while their leaders offer mediation to avoid war. 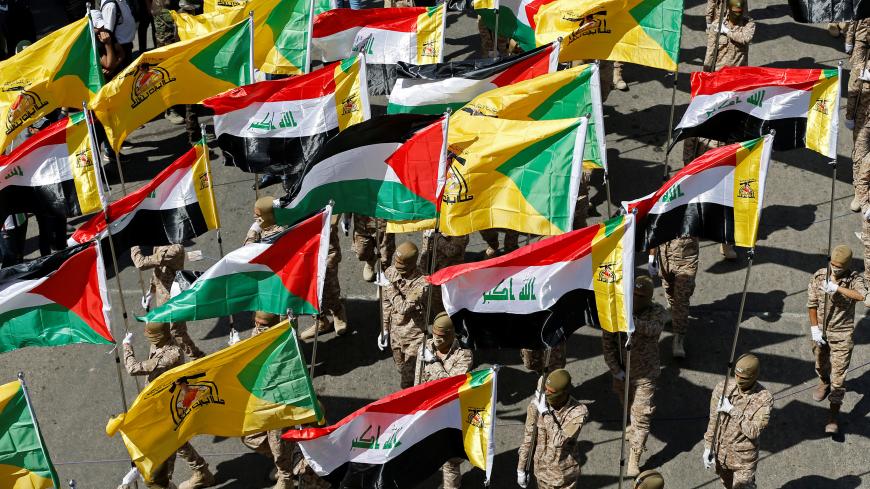 Iraqi Shiite Muslims march during a parade marking the annual Quds Day (Jerusalem Day) on the last Friday of the Muslim holy month of Ramadan in Baghdad, Iraq, May 31, 2019. - REUTERS/Thaier al-Sudani

International Quds Day received little attention from Iraqis this year. The protest in Baghdad was very quiet in contrast to previous years, attracting only a group of pro-Iranian Popular Mobilization Units (PMU) forces and a few politicians and tribal leaders. The PMU also organized a demonstration in the mostly Sunni city of Mosul, the first Quds demonstration organized there. Very few residents attended.

Iran made great efforts to promote the demonstrations this year to show the region's objection to the US Palestinian-Israel peace deal that is expected to be announced soon.

The pro-Iranian PMU heads the Quds Day observances in Iraq, raising the Iranian flag and photos of Iranian leaders, to objections by Iraqis over social media. Activist Mustafa Naser explained on Facebook that the Quds protest has become a venue for highlighting Iran influence and expansion to its rivals.

On May 25, a few days ahead of the demonstrations, thousands of Iraqis protested in Baghdad, Basra and other cities, demanding Iraq keep out of the conflict between Iran and the United States. At the protests, organized by Sadrist movement at the request of leader Muqtada Sadr. Protesters raised national slogans and criticized attempts to pull Iraq into the conflict.

PMU group Harakat Hezbollah al-Nujaba warned the United States previously that it would attack US troops in Iraq if there was an attack on Iran.

In his speech to the Arab Summit in Mecca May 30, Iraqi President Barham Salih called upon Arab leaders to prevent war, offering Iraqi mediation between the conflicting forces in the region.

“Our efforts are not only aimed at building an integrated economic and political system with our brothers in the Saudi Kingdom, the Gulf states, our Arab friends and our Islamic neighborhood, but also to contribute to the path of diplomacy in order to achieve peace and stability in the region and resolve the crises,” Salih said.

He highlighted the significance of Iraq's role in the region, reminding his Arab counterparts that the violence and political conflicts in Iraq have pose a serious threat, warning, “The disastrous results have created a political and security vacuum in the region.”

Salih noted, “Iraq will do its utmost to open the door to constructive dialogue and stresses the adoption of direct dialogue and renunciation of violence and war.” He added, “It is important that this dialogue lead to the crystallization of a stable regional system that will be the basis on which to change the character of our region as one of crisis to one of ​​integration and understanding.”

Prime Minister Adel Abdul Mahdi announced in mid-May that he is sending delegations to Iran and the United States to mediate in the current crisis between the two countries. Following the announcement, Iran's foreign minister made an unexpected visit to Baghdad. The visit was intended to relay messages between Iran and the United States, according to a senior Iraqi official in the Foreign Ministry who talked to Al-Monitor in condition of anonymity.

The senior Iraqi official informed Al-Monitor that Iraqi leaders tour regional countries as a part of an effort to reduce the tension and prevent the Arab Summit and the meeting of the Organization of Islamic Cooperation a day later from calling for strong action against Iran.

Despite the Iraqi leaders' efforts, the Arab Summit's final statement strongly condemned Iran's role in the region and called for strong action by the international community to end Iran’s destructive influence.

Iraqi President Barham Salih expressed his opposition to the statement, warning, "The regional and international crisis with Iran threatens to turn into a comprehensive war."