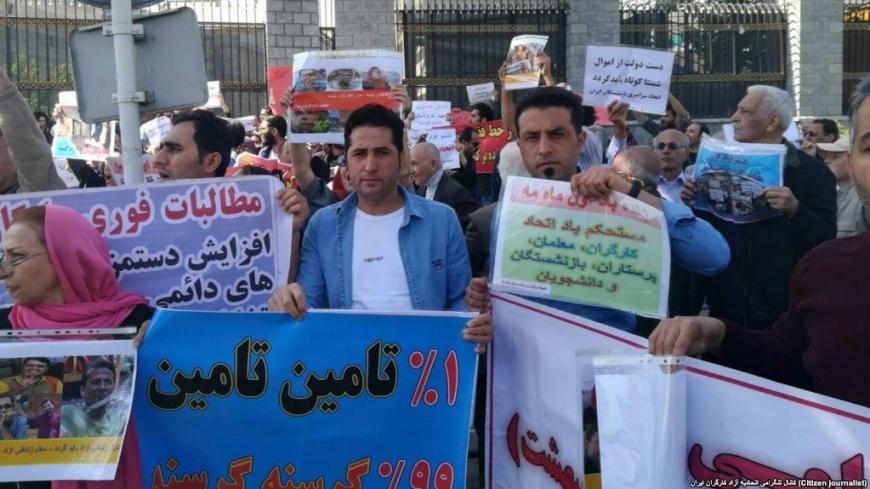 Iranian authorities violently dispersed gatherings of independent Iranian labor organizations and arrested dozens of activists who were protesting in association with International Workers’ Day (May Day).

According to the labor organizations involved, dozens of people have been arrested so far. Protesters gathered May 1 in front of Iran’s parliament building, where a number of well-known protesters — including Reza Shahabi, Kayvan Samimi, Hassan Saedi, Vahid Fereydouni and Mohammad Ali Eslaghi — were arrested. Teachers, retirees and students also joined the protests.

According to fliers calling for the protests, some of the issues were “instability in the labor force, low and delayed wages, privatization, unsuccessful businesses, and pressure on independent unions and activists.” A previous labor protest April 26 in Tehran was also violently dispersed by security forces and led to the arrests of activists and organizers. While most of the individuals who were arrested from that protest were released the same day, three individuals remain in custody.

Independent labor organizations were not the only groups protesting in Iran. A gathering of Iranian teachers who were protesting was also violently dispersed. A coordination council of trade unions, which organized the protests, reported that a number of protests took place across numerous provinces in Iran. Witnesses at the protests reported a strong security presence and also plainclothes men recording the protests.

According to Amnesty International, since May 2018 Iran has arrested two dozen teachers. Many of the protests and activists have called for better wages and more funding for public education.

While protests and strikes are not uncommon in Iran, they have been receiving more attention — possibly due to the higher economic pressure in the country and the impact of social media in personal testimonies.

One of the more high-profile cases involved Esmail Bakhshi. A founding member and spokesman for the independent Workers Union of Haft Tappeh Sugarcane Agro Industrial Company in the city of Shush in Khuzestan province, Bakhshi became well-known on social media when workers at the factory began protesting unpaid wages and the privatization of the factory with little transparency. He was arrested in November 2018. Shortly after his arrest, news of his torture slowly trickled out, which he later confirmed on Instagram.

Bakhshi was not deterred. In an open letter, which was also published on Instagram, Bakhshi challenged Iran’s Intelligence Minister Mahmoud Alavi to a live debate over the use of torture in Iran. The allegation was particularly important given that oftentimes some of the most egregious torture cases are blamed on the Intelligence Organization of the Islamic Revolutionary Guard Corps, whereas Bakhshi singled out the Hassan Rouhani administration’s Intelligence Ministry as the culprit.