Demands by striking workers at a troubled sugar plant in Iran's southwest remain unfulfilled, with several protest leaders being kept in police custody. 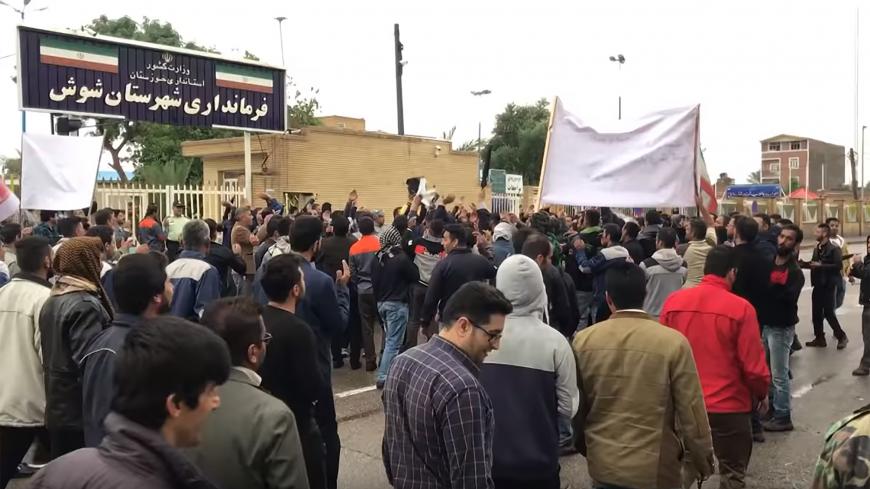 A still from a video uploaded Nov. 15, 2018, shows workers protesting outside the governor's office in Shush, Iran. - YouTube/manototv

"Imprisoned workers must be released!" shouted hundreds of workers at Haft Tappeh Sugarcane Agro-Industry Company, as their strike entered the 16th day. The workers are demanding that the company pay them their salaries, which they say have remained unpaid for months now.

The strikers have shuttled from venue to venue, hoping to have their voices heard. They have protested at the factory's main site outside the town of Shush, as well as the governor's office, and, even more boldly, at the town's Friday prayers, where they shouted, "We turn our faces to the homeland and our backs to the enemy!"

Despite their peaceful nature, the protests have reportedly seen some 20 people taken away in police cars. Khuzestan provincial officials have confirmed that at least four striking workers and a female journalist covering the protests have been arrested. A lawyer representing the arrested protest leaders said he was kept in the dark regarding the whereabouts of his clients, adding that they face security charges.

After decades of ups and downs, the government-owned enterprise in Iran's southwestern Khuzestan province was privatized in 2015. Ever since, the workers say, the company has been in the red. Now confirmed to be a fugitive, the owner is said to have been granted $800 million in government development loans, which he has failed to pay off.

Speculations have been rife about the owner's identity. Earlier this week, some media reported the owner was a nephew of Iran's First Vice President Ishaq Jahangiri. The Reformist politician, however, was quick to deny any association, describing the "allegation" in a public statement as baseless and part of "psychological media warfare."

While they have received little support from the government, the workers have been largely applauded by students across the country. And on social media, calls are growing for laborers who suffer similar conditions to come out in solidarity.

As the debate grew heated on social media, the key Iranian newspapers gave little room to the story on their front pages. Iran newspaper, voicing the official stance of President Hassan Rouhani's government, reported that the workers' family members have now joined the protests. "It’s about empty stomachs," the wife of a worker was quoted by the paper, as it reported a massive police presence in the vicinity of the Shush governor's office. With few details on the protests, Javan, a hard-line paper close to the Islamic Revolutionary Guard Corps, blamed the workers' plight on the "immature privatization" of the company.

The government has not viewed the workers' demands as a matter of urgency. A lawmaker representing the Shush constituency said promises had been offered to facilitate the due wages in the "near future." The governor of Khuzestan province also reported his talks with the country's finance minister for a "proper" settlement of the matter — a tweet that was met with a barrage of angry comments. "Stop playing with words. It would have been 'proper' if the workers had not been beaten up and arrested," one user tweeted back, advising the governor to apologize. "Paying due salaries does not need special meetings and plans at a Cabinet level. The workers and their families are starving," another replied.

Already the target of an all-out US economic war, Iran's crumbling industry is suffering its worst times. With many Iranian factory workers struggling to live on the breadline, the protests at Haft Tappeh could spill over to other factories across the nation, creating just another headache for a government fighting battles on multiple fronts.