Palestinian Authority gearing up for unrest amid financial crisis

Israel has approved the transfer of light armored military vehicles to the West Bank amid fears of the Palestinian Authority's economic collapse. 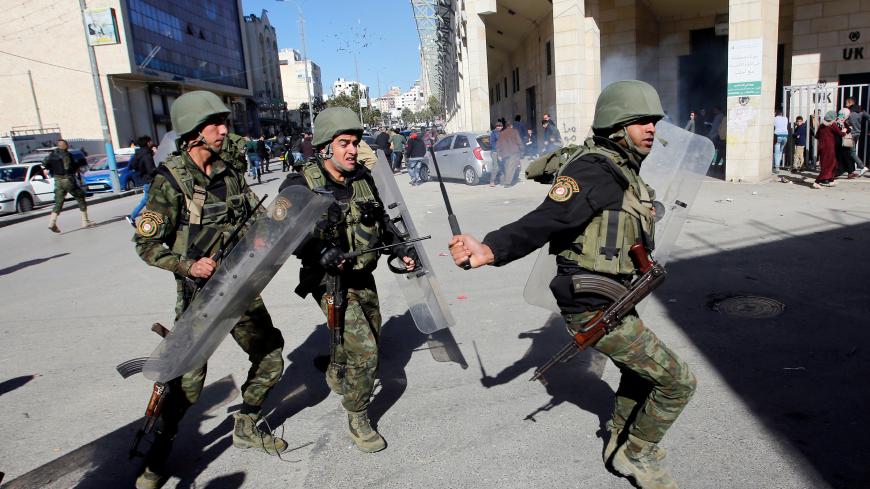 GAZA CITY, Gaza Strip — Israel has approved the transfer of 10 US-made light armored military vehicles from Jordan to the Palestinian security services on the West Bank. Green-lighted on May 21, the move follows warnings by Israeli security forces to Israeli politicians in April and May of the pending economic collapse of the Palestinian Authority (PA) and the deterioration of security coordination between Israel and the PA due to the worsening financial situation on the West Bank. Both the PA and Israel are worried that Palestinians might take to the streets in protest over the current status quo and at a time when the Palestinian security services lack military vehicles and equipment to adequately respond to potential turmoil.

The simmering financial and economic crisis stems from decreasing foreign grants and the cessation of US aid to the Palestinians under the Donald Trump administration. In addition, the PA has been refusing to accept taxes collected on its behalf by Israel since Feb. 19, after Israel unilaterally decided to deduct a portion equivalent to funds earmarked for Palestinian prisoners accused of terrorism and the families of those killed while involved in activities against the occupation. The amount for 2018 totaled 502 million shekels ($138 million).

Israel fears that in the coming months, the PA will be unable to meet its financial obligations and that this could lead it to slash employees' salaries by up to 30%. Such a situation could subsequently ignite the West Bank, resulting in confrontations between Palestinians and the Israeli army. Already, in March, the PA slashed salaries, including for security personnel, by half.

A cascading of events would derail the US and Israeli goal of maintaining calm in the Palestinian territories with the hope of furthering the Trump administration's anticipated peace plan. Israel hopes the delivery of the armored vehicles will entice Palestinian President Mahmoud Abbas to accept the tax funds Israel holds ready for transfer.

Hafez al-Rifai, director of public relations and information for the Palestinian National Security Forces, told Al-Monitor, “The introduction of armored vehicles followed US pressure on the Israeli government. Israel had objected to the introduction of such vehicles for more than six years, insisting on their remaining in Jordan.”

Rifai explained that Israel has for many years blocked certain equipment destined for Palestinian security forces, such as bulletproof shields, automatic rifles and ammunition and military vehicles, and that this has affected the work of the forces. Of note, fierce armed clashes erupted in Hebron on May 15 between two large families, and it was only after the armored vehicles arrived that the security forces were able to contain the confrontations.

Israel had similarly agreed to the dispatch of military vehicles at the end of 2016, over concern of possible unrest that might draw in the Israeli army after the breakdown of negotiations between the Israeli and Palestinian leaderships. The vehicles were also intended for use in the wake of clashes between PA security forces and armed groups in the northern West Bank.

PA spokesman Ibrahim Melhem told Al-Monitor that the Palestinian government is currently relying on local taxes and grants from the United Arab Emirates to sustain itself. He stressed that contrary to the hopes of the Trump administration, the PA will not be making any political concessions, and contrary to Israeli wishes, the PA will not be making any financial concessions. Qatar has recently stepped forward to offer aid for the West Bank, after previously lending economic support to Gaza.

Both the Palestinians and Israelis fear that an inability on the PA's part to maintain security could benefit Hamas and lead to its possibly taking control of the West Bank, along the lines of what transpired in Gaza in 2007. This also influenced the Israeli decision to approve the transfer of armored vehicles from Jordan.

Yahya Mousa, head of the Palestinian Legislative Council's Oversight Committee in Gaza and deputy head of Hamas’ parliamentary bloc, told Al-Monitor, “We were not surprised by Israel’s decision to allow the transfer of these vehicles. After all, the PA works to thwart any armed Palestinian action against Israel and it coordinates with Israel in this regard.”

Nonetheless, the introduction of armored vehicles could ultimately prove to be futile as long as there is no solution to the financial crisis jeopardizing the PA.