Israeli media report that Palestinian plainclothes policemen were deployed to protect settlers from Palestinian citizens, which the Palestinian police denies. 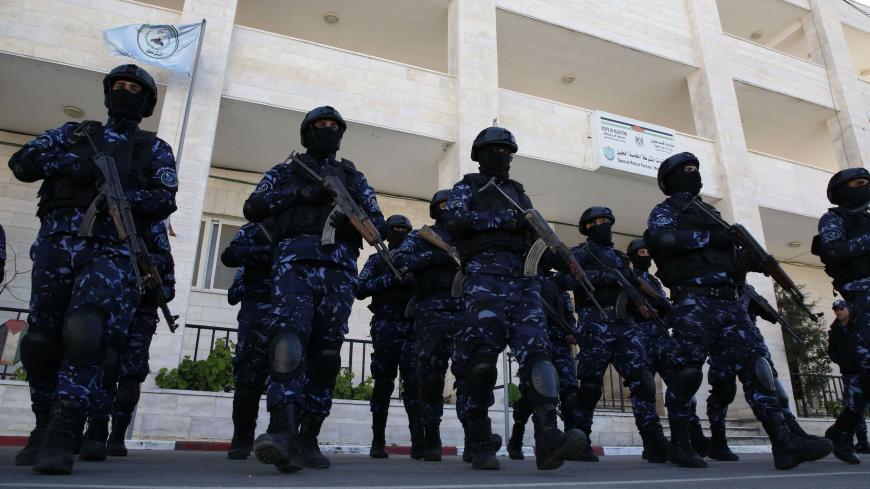 Palestinian policemen participate in a training session at their headquarters in the occupied West Bank city of Hebron, Jan. 30, 2019. - HAZEM BADER/AFP/Getty Images

GAZA CITY, Gaza Strip — The Palestinian General Directorate of Police denied Feb. 7 Israeli media reports on the orders given to policemen deployed in the villages of al-Lubban ash-Sharqiya and al-Sawiya in Area C in the northern West Bank. The reports claimed the Palestinian security forces were ordered to deploy in Area C under the security coordination in order to prevent Palestinian students from hurling stones at the vehicles of Israeli settlers.

Per the Oslo Accord, Area C, which makes up more than 60% of the West Bank, is under Israeli security and administrative control. Any Palestinian project in this area requires the approval of the Israeli authorities, including the deployment of Palestinian security forces, under the security coordination between Israel and the Palestinian Authority (PA).

The General Directorate of Police explained in its statement that it deployed a group of unarmed security forces in civilian clothes in front of schools in al-Lubban ash-Sharqiya and al-Sawiya in order to protect the students from settlers’ attacks and help them cross the street to their schools, as well as prevent the interruption of classes.

The directorate stressed that the police measures were widely welcomed by the students’ parents in both towns.

The number of settlements in the West Bank and Jerusalem has reached 198, with some 675,000 settlers, according to a Feb. 19 report by the PLO's Abdullah al-Hourani Center for Studies and Documentation.

Settler attacks against the Palestinians have risen by 60% in 2018 compared to 2017, according to a 2018 report by the United Nations Office for the Coordination of Humanitarian Affairs.

The Israeli media had reported Feb. 6 that the commander of the Israeli army’s Binyamin Brigade of the West Bank Division ordered the deployment of plainclothes Palestinian police officers along Route 60 leading to the town of al-Lubban ash-Sharqiya, in an effort to protect settlers, who claim they have been attacked by Palestinians, passing or driving by.

This order comes in the context of the security coordination between the Israeli and Palestinian sides. Palestinian President Mahmoud Abbas confirmed Feb. 6 security contacts between Israel and the PA on daily security affairs.

Abbas, however, denied any political relations with Israel, noting that the PA will deal with the next Israeli government, regardless of its political color, as long as it remains committed to international resolutions and agreements signed for a just and comprehensive peace between the two sides.

Palestinian police spokesman Louay Azriqat told Al-Monitor that policemen were ordered by the General Directorate of Police to dress as civilians because they were entering Area C. Azriqat said Palestinian police can’t enter the area unless there has been coordination with the Israeli side.

“Settlers are out to get Palestinian students and citizens, either through verbal abuse, intimidation or cutting off the roads for students preventing them from reaching their schools. Sometimes they even shoot [in the air] or attack houses in the town,” Mohammed al-Haj Ibrahim, a resident of al-Lubban ash-Sharqiya, told Al-Monitor. “The schools are only 800 meters [0.5 miles] from al-Lubban ash-Sharqiya settlement, making it a target for settlers."

Ibrahim said that the settlers are seeking to close the schools in the two towns and disrupt classes on the pretext that students are throwing stones. But this is not a justification for the calls for closure, especially since this was the action of a handful of students only and not the entire school, he explained.

Ibrahim said that citizens are trying to defend themselves through peaceful demonstrations or by filing complaints with human rights organizations, instead of direct clashes with the Israeli army and settlers. He believes that the Israelis’ main goal is to completely control the area and make it available to settlers or turn it into an army camp.

Commenting on the Palestinian plainclothes and unarmed policemen, Ibrahim noted the security forces are trying to protect students and citizens but they are also being attacked by settlers. He said that the heavily armed Israeli army escorts settlers from morning to evening to protect them and arrests students for the slightest incident.

“The Palestinian police are unable to protect us, while the Israeli army provides maximum protection to its settlers," he said.

Political analyst Khaled Mansour told Al-Monitor that the police saying it sent its forces to Area C to protect Palestinian students was illogical, as the protection of Palestinian civilians in this area is not part of the task of the police. He explained that the citizens themselves are protecting their children, since the PA cannot protect anyone as it does not have arms, powers or sovereignty over the area. The residents ought to form popular committees to protect themselves, he added.

Mansour said, “The PA or the Palestinian police cannot enter into Area C without approval from Israel under the security coordination, which is sacred for the PA, as Abbas recently put it. Let the people of the town and similar towns assume the responsibility of ensuring protection.”

He added, “It is unacceptable for us to cooperate with Israel so as to bring about security in the area. Our security is already breached and lacks the fundamentals.”

Mansour, however, noted that the PA could stop any coordination with Israel now since the Israeli government agreed to deduct millions of dollars from the Palestinian tax revenues, not to mention that the United States suspended its financial aid to the PA.

He said, “Maybe if the PA halts the security coordination, Israel could change how it deals with it and make sure to provide it with financial assistance. Israel would take the PA over any armed resistance factions any day.”

Omar Jaara, a professor of political science at An-Najah National University, told Al-Monitor that the Israelis, particularly the settlers, trust only the Israeli army with their safety and security and not plainclothes Palestinian policemen. He said that it is the Israeli army’s responsibility to protect settlers and not that of the Palestinians.

Jaara wondered, “How will the PA be able to protect citizens in Area C, at a time when it could not protect Palestinians from the abuses of settlers and soldiers in Area A, which is under its security and administrative control?”

He stressed that the security coordination between the two sides is ongoing, while Israel continues to attack Abbas and to violate all the agreements signed with the Palestinian side. He believes that Israel considers the PA as a toothless authority and a mere tool to protect its settlers.

“The PA has to stand up for its citizens and protect them against the increasing attacks by settlers and push for the implementation of international resolutions providing for Israel’s withdrawal from the occupied territories of 1967,” he concluded.