The State Department's annual report on terrorism includes acts of violence by Israeli settlers along with terrorism by Palestinians. 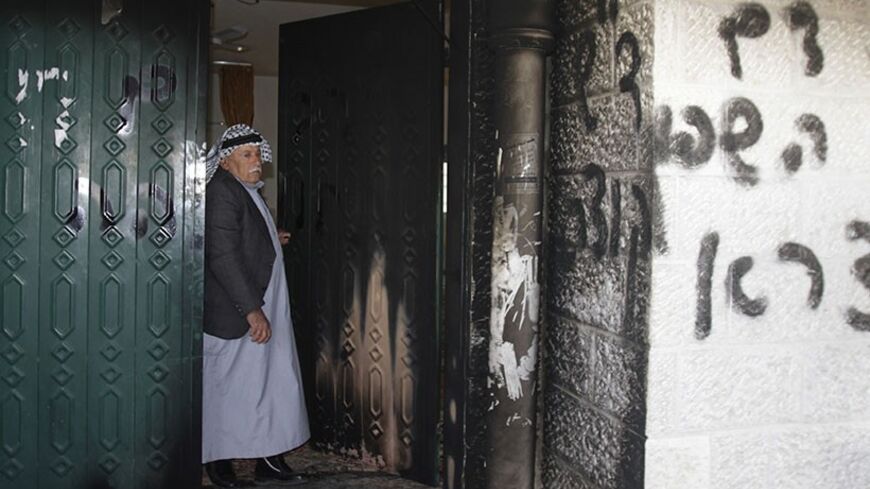 A Palestinian man stands near a door and wall of a mosque that were vandalized in the West Bank village of Deir Istiya, near the Jewish settlement of Ariel, Jan. 15, 2014. The main gate of the mosque and some of the carpeting inside were charred by the flames and graffiti in Hebrew reads, "Revenge for spilled blood" and "Arabs Out." - REUTERS/Abed Omar Qusini

On April 30, the US State Department issued its annual Country Reports on Terrorism 2013. The report catalogues the multifaceted local, regional and global security threats to US interests characterized by Washington as terror. Included in this catalogue of dangers is what the Barack Obama administration, taking its cue from the Israelis, defines as “price tag” actions — that is, destructive and intimidating actions by Israelis directed against Palestinians and their property, including mostly land but also mosques and vehicles in the West Bank, and increasingly in Israel itself.

The government of Prime Minister Benjamin Netanyahu has refused to legally characterize such actions as terror. The Israeli security cabinet has authorized the Ministry of Defense to classify groups that perpetrate “price tag” attacks as “illegal associations,” a less emotive and legally extreme kind of transgression.

Some political and security officials, however, do not shrink form calling a spade a spade. Already in September 2012, Minister of Internal Security Yitzhak Aharonovitch announced the establishment of a new police unit to counter settler violence and called for a “zero-tolerance policy against terror, the desecration of Islamic religious institutions, attacks on symbols of governance and attacks commonly known as ‘price tag.’”

"We know who are committing these acts and plan to make more arrests shortly. We intend on putting these criminals behind bars," Aharonovitch said while visiting the mosque in the Israeli Arab village Fureidis, the site of one recent such attack. "These are a bunch of criminals taking the law into their own hands. Most of them are in Judea and Samaria, are part of the extreme right and we know who most of them are.”

The Obama administration concludes, however, that Israel goes wobbly when it comes to confronting "price tag" terror. The report observes that such attacks continue and their perpetrators operate with impunity.

“Attacks by extremist Israeli settlers against Palestinian residents, property and places of worship in the West Bank continued and were largely unprosecuted, according to UN and NGO sources,” notes the State Department. “The UN Office of the Coordinator for Humanitarian Affairs reported 399 attacks by extremist Israeli settlers that resulted in Palestinian injuries or property damage. Violent extremists, including Israeli settlers, vandalized five mosques and three churches in Jerusalem and the West Bank, according to data compiled by the UN.”

The price tag phenomenon is not some incidental byproduct of continuing occupation and settlement. Since 1967, for example, no less than 800,000 olive trees have been uprooted in the West Bank, according to a joint report by the Palestinian Authority (PA) and the Applied Research Institute in Jerusalem. The West Bank olive industry supports the livelihoods of roughly 80,000 families.

The sense of insecurity fostered by such destruction is one element in a broad spectrum of efforts by Israel, official or otherwise, to undermine the ability of Palestinians to confront the existential threat that Israel’s territorial expansion poses to them, not only personally but also as a national community.

What is the confrontation between Israeli and Palestinians if not a struggle for control over land? Villagers and rural settlers are at the front lines of this battle. And make no mistake, it is a battle. The few instances noted in the State Department report do not do justice to the pervasive sense of insecurity resulting from an all but daily drumbeat of incidents. For those who track such things, every day brings some sort of confrontation over land rights and use.

This is also a very unequal battle — "price tags" operate in a forgiving, permissive and enabling context as an informal part of the effort to "claim space" for settlement and Jewish sovereignty. The Israel Defense Forces (IDF), notwithstanding its international obligations as an occupying power, is in business to protect settlers and their interests.

What, then, about the police, intelligence and internal security forces of the PA? The State Department report has not one word about the ability of the PA to address the concerns of Palestinians facing “Jewish terror,” and for good reason. Israel simply does not permit PA security forces jurisdiction in any incidents involving settlers or land in Area C, comprising 60% of the West Bank.

The report lauds the role of PA counterterrorism training “as a leading contributor to the improved security environment in the West Bank, and a dramatic reduction in [Palestinian] terrorist incidents in and emanating from the West Bank over the past seven years,” — but solely against Palestinian targets, not Israeli ones.

PA President Mahmoud Abbas also receives Washington’s commendation for supporting this mission. He “consistently reiterated his commitment to nonviolence and recognition of the State of Israel. He continued to support a security program involving disarmament of fugitive [Palestinian] militants, arresting [Palestinian] members of terrorist organizations and gradually dismantling [Palestinian] armed groups in the West Bank.”

The sole point of reference for such rosy assessments is the improvement in the sense of security offered by the PA to Israel and its citizens. This mission, after all, has been a key focus of US efforts since the creation of the US training program initially headed by Gen. Keith Dayton in 2007. A Palestinian mission to guard against and confront the growing phenomenon of security incidents perpetrated by Israelis against Palestinians simply does not exist.

The absence of a Palestinian effort to protect its own people against depredations by settlers, let alone by the official security arm of Israel — the IDF — is not an oversight. The broad Palestinian interest in law and order is confined only to those areas defined and permitted by Israel. Palestinian security institutions are explicitly forbidden by agreements signed with Israel to protect their own people against what most consider an existential threat — settlement and settlers.

What, then, are Palestinians to do to protect themselves and their property from settlers?

During the height of the second intifada, a senior Al-Aqsa Martyrs Brigades (AMB) leader that I interviewed in Balatta refugee camp in Nablus said that the AMB organized initially to protect villagers against settler attacks. It did organize attacks against settlers, but hounded by Israel, the AMB degenerated into a semi-criminal protection racket and its forces were ultimately disbanded.

"Who protects villagers today?” I asked him recently.

"They are on their own,” said the onetime militant who now works for the PA security services.

The brigades are ancient history, and their self-declared mission to protect villagers crushed. Neither the IDF nor the Palestinian security services and police will protect them. So what should they do?

Increasingly, Palestinian villagers, with nominal but critical support from the PA, are themselves taking the initiative to create regular if informal unarmed self-defense units.

“We have a continuing expansion of settlements,” explains Ghassan Douglas, a PA staff member who leads this effort in the Nablus region. “Added to this are the often violent acts that settler groups are undertaking, and these are expanding as well. The protests of settlers have gone from protesting inside their settlements to protests outside of settlements, then into the mosques and to our orchards and lands.”

In an effort reminicent of the self-defense units formed in the 1930s, Palestinians have formed village-based Guard Committees.

“Groups stay up late in the evening and if they see a settler attack they call me,” Douglas said. “They go to the mosque and announce it to all of the population. People wake up and confront the settlers. We have a crisis, so there are [a number of guard committees]. They work in a shift system, 24 hours a day. The volunteers come from many walks of life. Most are farmers. We have no arms, and no radios other than our cell phones.”

Where local committees have been established, settlers have had to modify their operations.

“At the end of the day,” Douglas said, “the most important achievement is that settlers are aware that people are awake and observing. As a consequence, the nature of settler actions has changed. Direct attacks against villages have decreased while attacks have moved to the land and roads. In Deir Istiya, for example, settlers burned the mosque because there was no guard team of observers in the village. When such groups are present, settlers select areas where they see that no committees are active.”

No matter how effective, self-defense efforts by villagers, indifferently supported by the PA, cannot begin to address the formal and informal power that Israel has mobilized to defeat them.

“It is worrying that things might develop into an explosion,” Douglas said. “It is worrying that settlers enter into the hearts of villages. The stalemate on the political level contributes to this feeling. When I see Israelis marching with huge numbers of Knesset members, we are demoralized.”