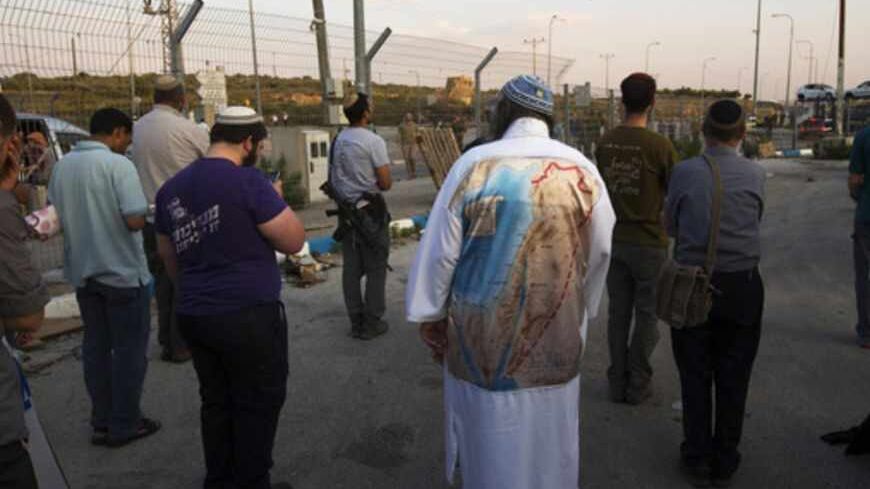 Jewish settlers, one of them wearing a garment printed with a map showing the borders of biblical Israel, pray during a protest at the site of a stabbing attack by a Palestinian, at Tapuach junction, near the West Bank city of Nablus, April 30, 2013. - REUTERS/Ronen Zvulun

The multibillion-dollar development plan for the West Bank unveiled by US Secretary of State John Kerry in Jordan this weekend is the first practical manifestation of the renewed US interest in promoting a diplomatic plan to end Israel's occupation and establish a Palestinian state.

Yet while no doubt well-intentioned, there is no indication that this latest injection of enthusiasm to improve the declining lot of Palestinians, who have been ruled for almost half a century by Israel, will fare any better than its failed predecessors, or indeed that there is any reason to think that it even should.

During the darkest days of the second intifada, I interviewed a wanted member of the Al Aqsa Martyrs Brigade (AMB) in the Balatta refugee camp in the West Bank town of Nablus. As gunshots echoed in the background, I asked him why he joined up.

“No one else is protecting the villagers from the settlers,” he explained.

“Not well at all,” he acknowledged. The AMB was on the run, besieged by a relentless campaign mounted by the Israeli Defense Forces. They had surrendered their self-described mission to protect villagers in favor of self-preservation and occasional shakedowns of local merchants.

“Villagers are on their own,” he admitted.

Nothing has changed since then. The AMB has been dismantled, its members imprisoned or amnestied and recruited into the security services of the Palestinian Authority (PA). Today, the various arms of the PA's security system — from General Intelligence to the National Security Forces trained by the US and the “Shurta” or “blue police” mentored by the EU — are prohibited by agreement with Israel and their daily doctrine from defending against what most Palestinians consider their most threatening, existential foe. That would be Israel in general, its army and the growing numbers of settlers who are contesting Palestinians at the fault line of the conflict in a zero-sum battle over the land.

Settlers are a law unto themselves in the West Bank, locked in a symbiotic embrace with the IDF. The Israeli army is cowed by settlers' political power when it is not sympathetic with their unceasing efforts to “redeem the land.” When olive trees are cut, fences breached, access roads built, or the occasional mosque or car torched, Palestinian security forces are nowhere to be found. When villagers have a complaint against settlers to register, the Palestinian police direct them to contact the IDF, in whose bosom the settlers and their depredations grow.

In the lawless environment sanctioned by occupation, settlers are not the only ones taking the law into their own hands. On April 30, for the first time since September 2011, a settler was killed by a Palestinian attacker — stabbed at a major road junction in the northern West Bank transited by settlers and Palestinians alike. The killing sparked “price tag” reprisals against Palestinians and their property, primarily in the Nablus governorate, and it has fueled settler demands that open-fire restrictions placed on the IDF and settlers be loosened.

Those looking for signs of the next uprising need look no further than these parts of the West Bank, where every day private and communal interests clash — not in the cities of the West Bank but along the roads and near small villages on the periphery of settlements, who numbers have exploded since Ariel Sharon, upon his return from the Wye Plantation talks in late 1998, urged settlers to “grab and settle.”

"Everybody has to move, run and grab as many hilltops as they can to enlarge the settlements because everything we take now will stay ours,” Sharon, then a minister in the first Netanyahu government, exhorted in a meeting with settlement supporters. “Everything we don't grab will go to them."

There was a time decades ago when Israel claimed that settlers then staking out new communities in the West Bank and “the Arabs of the Land of Israel” — aka Palestinians — not only could live in harmony but also that the growing presence of settlers was a net plus to the Palestinian economy. Even today one can occasionally read of joint efforts by settlers and villagers; for example, to oppose the particular path of the separation barrier south of Jerusalem.

The idea that “a rising tide lifts all boats” was always a fiction, but it was a comforting one — in many respects not unlike the current effort to show that, notwithstanding the grinding reality of occupation and settlement, the economic lot of Palestinians need not suffer.

In his May 22 report to the United Nations Security Council, Robert H. Serry, UN special coordinator for the Middle East peace process, suggested another and more compelling narrative, one defined by unceasing pressure by settlers on the essential elements necessary to maintain a viable Palestinian presence, personal as well as national, on the land.

Ariel Sharon long ago departed Israel's political scene, but his view that “everything we don't grab will go to them" continues to define Israel's policy. Sharon's successor Benjamin Netanyahu imbibed this iron law with his mother's milk. While Netanyahu is not in principle averse to an international effort to pump money into expanding the Palestinian economy, it will only be permitted to proceed as long as it does not challenge the imperative to “grab and settle” that is at the heart of occupation.