No Palestinian tears for Sharon

Palestinians will not be mourning the loss of Israeli strongman Ariel Sharon, whom they remember as the "Butcher of Beirut." 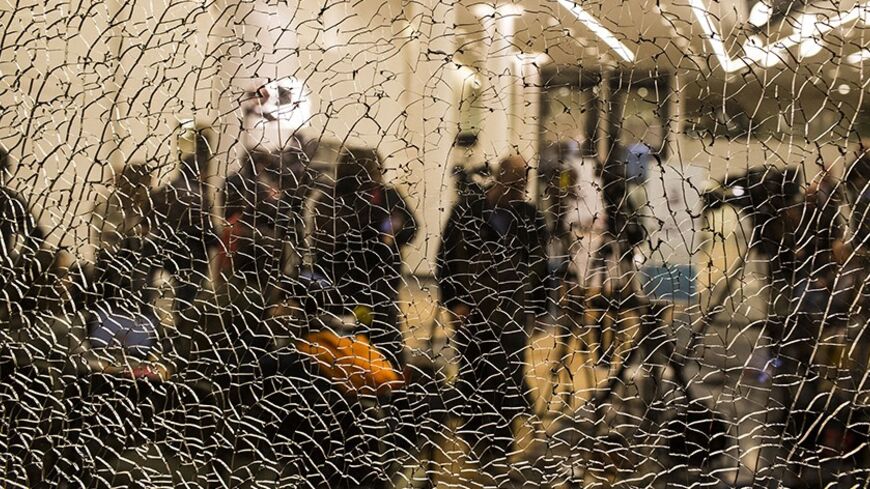 Members of the press are seen through a cracked window while waiting for an update on former Prime Minister Ariel Sharon's condition at the Tel Hashomer hospital, near Tel Aviv, Jan. 9, 2014. - Ilia Yefimovich/Getty Images

If you were to ask a 20-year-old Palestinian today about Ariel Sharon, you might be surprised how little this generation knows about him. The past eight years, in which Sharon became incapacitated, and the few years before that in which he had softened his radical stance, appear to have chipped away at the warmonger image that is still etched in the consciousness of almost every Palestinian over 25 years old.

More than any other Israeli military figure, Sharon seems to be present in every violent mark since the Nakba and creation of Israel.

He joined the Israeli army in 1948 and one of his first assignments by David Ben Gurion was in 1953 to establish Unit 101, which focused on retaliation to cross-border attacks by the Palestinian fedayeen (militants). After one such attack, Sharon’s men crossed into the Palestinian town of Qibya, then under Jordan’s rule, and killed 69 Palestinian villagers, two-thirds of whom were women and children. The Qibya massacre showed Sharon’s ruthlessness and would become a symbol of the brutal Israeli retaliations to any Palestinian resistance attacks.

The brutality of Sharon and his Unit 101 was on display again after the Israeli occupation in 1967. His unit was dispatched to the Gaza Strip specifically to root out the fedayeen from the refugee camps. People of the densely populated Jabaliya refugee camp in northern Gaza still remember Sharon and his bulldozers as they literally widened the streets of the camp by destroying homes on both sides of the road, so that Israeli army vehicles could travel easily while they patrolled the camp to crush the resistance.

As defense minister under Menachem Begin in 1981, Sharon turned to spearheading the settlement drive in both the West Bank and Gaza. The photo most etched in older Palestinian minds is that of Sharon on a hilltop with a map, and soldiers and settler leaders around him.

But perhaps the most negative memory for Palestinians of Sharon was his relentless war on the PLO and the invasion of Lebanon, the siege of Beirut and the Sabra and Shatila massacres in 1982. This sealed Sharon’s image in Palestinian minds as the “Butcher of Beirut.”

Sharon’s role in the massacres of the Palestinian camps brought condemnation in Israel that eventually led to his resignation and years of political inactivity. Nevertheless, he succeeded in one event at the end of 2000 to reinvent his radical image in Palestinian eyes. Shortly after the failure of the Camp David talks between Bill Clinton, Ehud Barak and Yasser Arafat, Sharon made his move. His controversial visit to Al-Aqsa Mosque on Sept. 28, 2000, flanked by 1,000 Israeli troops provoked mass demonstrations that were put down violently. The killings at Al-Aqsa sparked demonstrations throughout Palestine and among Palestinians living in Israel, which ushered in the second intifada.

But Sharon was able to use the event and Barak’s failure to bring peace to return to the limelight and get elected for the first time as prime minister of Israel. In the ensuing six years, Israel under Sharon reoccupied West Bank cities and erected the controversial wall deep in Palestinian lands. But at the same time, Sharon initiated the havrada (unilateral disengagement) strategy. This concept calls for Israel to unilaterally move from areas it is not interested in, such as the Gaza Strip and some parts of the West Bank, without a peace agreement. In 2005, under Sharon’s orders, Israel’s 8,500 settlers and soldiers pulled out of the Gaza Strip without a peace agreement or any political deal with Palestinians. The plan was to be followed by similar unilateral moves in the West Bank, but only Sharon’s health prevented him to follow through.

The past eight years in which Sharon has been in a coma might have slightly mellowed the picture of the former Israeli prime minister in the eyes of some, mainly young, Palestinians. But for the majority of Palestinians, there is little that can be done to remove the image of the "Butcher of Beirut," the architect of the settlements and the provoker at Al-Aqsa from their minds. Palestinians are not going to shed any tears for the demise of Sharon.