Israeli settlers attack Palestinians in their own homes

Terror has prevailed over the West Bank streets and towns as the settlers’ attacks against Palestinians have been on the rise since early 2021. 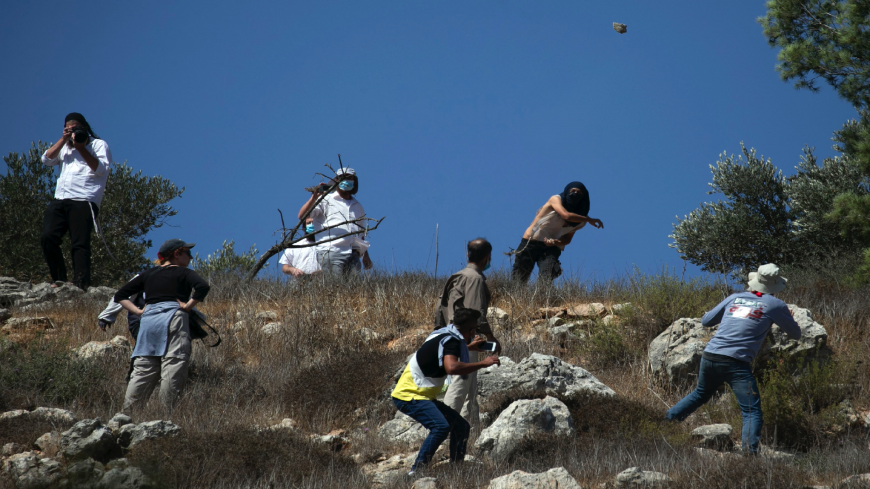 Masked Israeli settlers attack Palestinian olive farmers from the village of Hawara on fields near the settlement of Yitzhar in the Israeli-occupied West Bank, on Oct. 7, 2020. - JAAFAR ASHTIYEH/AFP via Getty Images

In the predawn hours of Feb. 5, an Israeli settler working as a guard at the Sadeh Ephraim Farm outpost near Ramallah shot dead Khaled Maher Nofal, 34, on the hilltop of Mount al-Risan, just outside the Palestinian village of Ras Karkar. According to Israeli accounts, Khaled, a resident of Ras Karkar, had stormed the outpost and attacked one of the settlers before he was shot.

In the past weeks, the streets, villages and towns of the West Bank have turned into arenas of real terror and fear, with daily assaults by settlers against Palestinians, whether in their vehicles, on the streets or in their homes.

On Jan. 17, Mashhour al-Qut, a Palestinian from Madama village south of Nablus in the northern West Bank, received a painful phone call from his wife while at work. “Hala is dead. She is gone now,” she cried.

The phone call broke him. He could not believe what he heard. “How?” he asked. “By the settlers,” she replied. But that was before she learned that her daughter Hala, 10, was not dead but had fallen into a coma after getting hit in the face with a stone.

Speaking to Al-Monitor, Qut recounted that Israeli settlers from the settlement of Yitzhar, only 3 kilometers from his house, attacked his two daughters, Hala, 10, and Masa, 5, who were playing around the house. When a stone hit Masa on the leg, she rushed into the house, while Hala was hit on the face. The settlers tried to drag Hala away in an attempt to kidnap her before she lost consciousness, he added.

“Their mother rushed out of the house after learning from Masa that they were attacked with stones. The settlers had escaped, and she found Hala unconscious, lying facedown on the floor. She screamed out for help from the neighbors to take Hala to the hospital,” he said.

Other settlers then rushed to the area near his house to support the attackers who failed to kidnap his daughter. His wife was also hit in the leg by a stone, the house’s windows were smashed and fragments caused minor injuries to his baby daughter inside the house.

Hala was diagnosed with a broken nose and mouth and has been receiving treatment since the attack. On Jan. 27, she had nose surgery at the Rafidia Surgical Hospital in Nablus city, and she has to attend a series of medical appointments in the next few weeks.

Although the family survived the attack, the attack rang an alarm among Palestinians. “This is the first time that settlers dare to get close to the citizens’ houses in our town. That is a dangerous indicator,” said Qut, suggesting the formation of guard committees to protect citizens.

Fear prevails on West Bank streets and towns due to settlers’ daily attacks against Palestinians’ vehicles and houses.

On Jan. 21, a group of settlers injured 3-year-old Jad Sawafta in the face. The toddler was in his father’s car near the entrance to the town of Burqa northeast of Ramallah while on his way to the Tubas governorate when the settlers attacked them. Sawafta was admitted to the hospital for treatment.

Also on Jan. 21, a group of Israeli settlers conducted multiple attacks in different parts of the West Bank. Some of them threw Molotov cocktails at two houses in the Burin village in south Nablus, which caused suffocation injuries to a number of people. Another group blocked the Gush Etzion Junction and a street close to Tekoa east of Bethlehem, and threw stones at citizens' vehicles. The same attack was repeated on other vehicles in north Hebron and near al-Lubban ash-Sharqiya south of Nablus.

According to a report by the Israeli human rights group B'Tselem released on Jan. 28, about 49 violent attacks by settlers (the attacks do not include protest marches and roadblocks by settlers who did not throw stones) were documented from Dec. 21, 2020, until Jan. 24, 2021.

The report said 28 of the attacks involved physical assaults, including 19 stone-throwing assaults at passing cars, three shooting assaults and six other types of attacks. As for the remaining cases, they consist of attacks on Palestinian houses, agricultural crops and other property. Fifteen Palestinians were injured in stone-throwing attacks, including four children during the abovementioned period, according to the report.

Walid Assaf, head of the Palestinian Authority's Commission on Apartheid Wall and Colonization Resistance, told Al-Monitor the settlers’ attacks have increased dramatically in conjunction with the Israeli army’s attacks, as they doubled in January compared to previous years.

He said the Israeli army and settlers have uprooted more than 10,000 forest trees and 300 olive trees since early 2021 in the Ainun area east of the Tubas governorate. Meanwhile, in 2020, the number of trees uprooted by the Israeli army amounted to nearly 8,500, and about 4,000 in 2019, Assaf said.

Assaf said these attacks seek to implement the Israeli government’s decisions to eliminate the Palestinian presence in Area C of the West Bank in an attempt to impose a new fait accompli, after the term of Israel’s main ally, former US President Donald Trump, ended and US President Joe Biden took office.

Commenting on the options Palestinians have to protect themselves from these attacks, Assaf said, “We need to form popular protection committees in all towns tasked with protecting citizens and villages and barricading the houses, particularly those located on the outskirts of villages that are under constant attacks. Also, surveillance cameras and lighting towers must be installed in the neighborhoods. A popular resistance should also be activated while responding to the settlers by blocking the main streets and roads.”

On Jan. 28, a number of Palestinian resistance activists closed the Nablus-Qalqilya road in the northern West Bank in the face of settlers. Clashes erupted between the activists and the Israeli army, leading to a number of injuries. According to Assaf, similar action will be taken in the coming days.

Assaf noted that protection committees made up of volunteers were set up in the past, but the committees they are currently seeking to establish will enjoy full political support and will be provided with the necessary capabilities. Such a dossier is being discussed at the highest political level, he added.