The United States is requesting numerous concessions from its Kurdish allies in Syria, but the Kurds are pushing back. 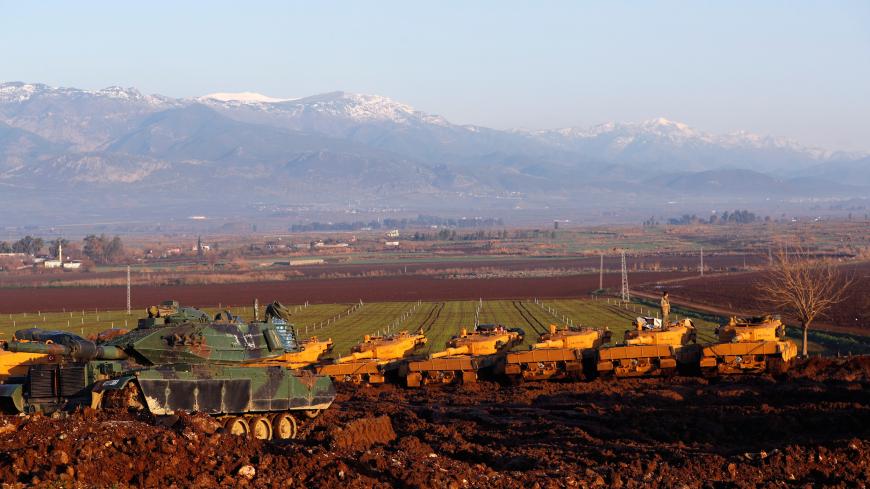 The United States is pressing its Kurdish allies in Syria to ease their resistance to allowing Turkish forces to deploy on their side of the Turkish-Syrian border, well-informed sources told Al-Monitor. The Turkish forces would be a part of the proposed safe zone in northeastern Syria.

US officials are pushing for “a limited number” of Turkish forces to be allowed to deploy on the Syrian side of the border, along a stretch of territory running from the east of the Euphrates River to the Iraqi border, according to a senior official from the Kurdish-led Syrian Democratic Forces (SDF). The source told Al-Monitor, “The subject has already been broached with us and we regard the presence of Turkish troops on our soil as extremely problematic and have made our position clear.”

The source said that the Donald Trump administration’s Syria envoy, Ambassador Jim Jeffrey, was expected to travel to northeastern Syria in the coming days, when he is likely to renew demands that Turkish forces be allowed to enter northeastern Syria.

SDF commander in chief Mazlum Kobane is known to be viscerally opposed to any intrusion by Turkish forces. But Kobane is also a firm advocate of maintaining the partnership with the United States, which puts him in a bind. Another SDF official told Al-Monitor that the US demand would never be accepted.

US officials did not respond to Al-Monitor’s request for comment.

Jeffrey said at an annual conference of Turkish American business lobbies in Washington that Turkey and the United States had yet to agree on the contours of a safe zone plan, though they continued to work on it. Jeffrey's comments, translated into Turkish on Turkey’s NTV news channel, made clear that the United States understood Turkey’s security concerns and that the sides were focused on a plan that would exclude the Syrian Kurdish People’s Protection Units (YPG). Vaguely defined “locals” are supposed to replace the YPG. “Arabs in Arab-majority areas and Kurds in others,” the second SDF official said, confirming knowledge of the plan.

The YPG is the driving force of the SDF, but it is also linked to the Kurdistan Workers Party (PKK). The PKK has fought for Kurdish independence and now for self-rule inside Turkey since 1984. Turkey says the two groups are the same — terrorists — and pose an existential risk to Turkey’s national security. Turkey is furious that the United States is continuing its partnership with the YPG. Hardly a day passes without a pro-government news outlet publishing “proof” of further American treachery.

US officials privately acknowledge there is little difference between the YPG and the PKK. Yet they cling to the fanciful notion that the YPG can be peeled away from the PKK and its commanders in Iraqi Kurdistan. Now Washington is reportedly telling YPG-linked Syrian Kurds in the SDF to “leave the YPG,” while whispering vague promises of getting Turkey back to the negotiating table with imprisoned PKK leader Abdullah Ocalan, whose moral authority over the movement remains unchallenged some 20 years after he was captured with the CIA’s help.

More likely, the United States will do the leaving. Richard Outzen, senior adviser for Syria engagement at the State Department, spoke at a panel organized by a pro-government Turkish think tank, the SETA Foundation, in Washington today, saying, “The US policy is first of all that we are going to withdraw those troops. Now the modalities of how quickly that happens and what exactly we do in the wake of it, how much support we get from the international coalition [to eliminate residual IS presence] that will survive the withdrawal of our troops, the safe zone plays a big role in that."

Trump had announced in December that he was withdrawing all US troops from Syria in 30 days.

The withdrawal has been deferred but not rescinded following pushback from the Pentagon and notably Central Command that wants to preserve the alliance with the SDF and is leery of the risks posed by an ill-planned departure.

US pressure on the Syrian Kurds fits the broader pattern of Washington demanding concessions from the SDF on behalf of Ankara without Ankara delivering any concessions to the Kurds in return, sources with close knowledge of the deliberations between Ankara, Washington and the SDF told Al-Monitor. Kobane confirmed this in a recent interview with Al-Monitor, saying Turkey was never satisfied and kept asking “for more.”

The status of the Arab-dominated town of Manbij is a case in point.

Turkey vowed to invade Manbij if the town's military and legislative councils were not purged of individuals Ankara deemed as linked to the YPG. In January, the Manbij councils were reconstituted with new members duly vetted to meet all of Turkey’s demands. Yet Turkish President Recep Tayyip Erdogan continues to threaten to invade Manbij and expunge the YPG from the border.

Erdogan repeated these threats in a speech on the night of the March 31 local elections, dispelling all hope that it was just pre-electoral saber-rattling aimed at winning nationalist votes.

“Our target is now eliminating the terror structures in Manbij and east of the Euphrates," Erdogan said, "and making Syria a safe place for [Syrians] sheltering in our country to return to their homes.” Turkish Defense Minister Hulusi Akar recently inaugurated an Advanced Joint Operations Center on the border where the offensive will supposedly be coordinated.

Jeffrey and his team have used Erdogan’s threats to wrest even more ground from the SDF and to push them to replicate the Manbij model east of the Euphrates River. “They are telling the SDF, ‘We can’t keep the Turks out so we need to let them in peacefully,'" a source familiar with the administration’s thinking said. The Kurds get nothing out of it other than being told that each new concession will stave off a Turkish attack. “It's a bottomless and dangerous pit,” the source said.

This policy of appeasement stands in stark contrast with Washington’s vows to impose sanctions on Turkey over its acquisition of the Russian-made S-400 missile systems, as well as its continued detention of US nationals and Turkish employees of US diplomatic missions on spurious terrorism charges.

At the same time, Washington is pressuring the Kurds to not engage with the Syrian regime and instead to unite with Turkey against the regime so as to exert maximum pressure on President Bashar al-Assad in the hope that he will fall. This would fulfill the US administration’s other goal of reducing Iran’s influence. It could also wrest Turkey out of Russia’s orbit, or so the thinking goes.

But critics say it fails to take stock of how Russia will react. Russia has made clear that it would not welcome further Turkish colonizing in Syria, specifically the kind that it oversaw when it allowed Turkish forces to overrun Kurdish-majority Afrin in January 2018.

In the meantime, Manbij is becoming more unstable. The Islamic State claimed responsibility March 26 for an attack that killed seven Manbij Military Council guards. Twin blasts struck the town April 11, injuring several residents. A suicide bomber killed four Americans in January, including two service members, and 10 others in Manbij. It was the single deadliest day for American forces in Syria. The Islamic State claimed responsibility for the attack.

Fabrice Balanche, an associate professor at France’s Lyon 2 University who has written extensively about Syria, told Al-Monitor, “The Manbij attack was a message of what could follow if the Americans stay. Russia, Iran, nobody will leave them in peace. And Turkish intelligence may choose to look the other way.”

Update: April 16, 2019.  An earlier version of this story included a quote attributed to Richard Outzen that was incomplete and, hence, open to misinterpretation. It has been removed.