Intel: Why Armenia wants to make peace with Turkey 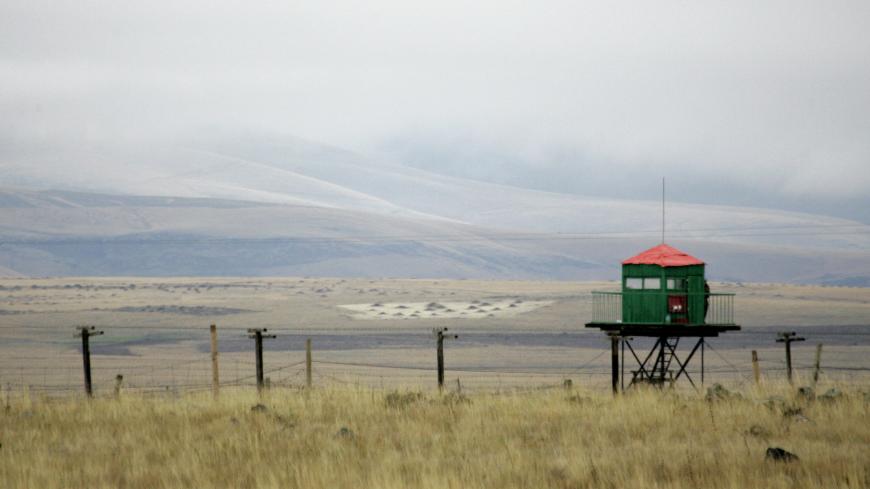 A border tower is seen at the Armenian side of Armenian-Turkish border in the village of Getap, some 85 kilometers (53 miles) northwest of the capital Yerevan, Nov. 1, 2009. - REUTERS/David Mdzinarishvili

Armenia’s reformist prime minister says he’s ready to establish relations with Turkey after his bloc won a landslide victory in Sunday’s parliamentary elections. Nikol Pashinian, a former journalist who was swept into power in May after leading mass protests that forced out his predecessor, said his government was ready to forge ties “without preconditions” with Armenia’s historic rival and hoped Ankara was ready to do the same.

Why it matters: Pashinian, 43, won on a mandate of ending the rampant corruption, poverty and joblessness that have bedeviled the former Soviet state since its independence in 1991. Establishing diplomatic ties and reopening the border with Turkey would help ease the grip of the oligarchs who monopolize Armenia’s economy.

More critically, it would strengthen Yerevan’s hand in talks to end the long-running conflict with neighboring Azerbaijan over the contested mountainous enclave of Nagorno-Karabakh, an Armenian-majority region that Armenia wrested from Azerbaijan in 1993. Turkey sealed its border with Armenia in solidarity with its ethnic kin in Azerbaijan, which it had secretly armed throughout the conflict. Normalization with Turkey would also help offset Armenia’s dependence on Moscow and allow Azerbaijan to export gas to Europe via Armenia, a shorter and cheaper alternative to existing lines through Georgia.

The Washington connection: Meanwhile, peace with Armenia would win Ankara much needed brownie points in Congress, where Turkey’s continued detention of US nationals and US Consulate employees, as well as its plans to buy Russian-made S-400 missiles, have triggered bipartisan fury. Both the Senate and the House are threatening a slew of sanctions. And long-touted congressional efforts to formally recognize the mass murder of more than a million Ottoman Armenians in 1915 as genocide would be even less likely to pass.

Turkic solidarity: In an ideal world, Turkey would seize the olive branch being extended. But it has steadfastly refused to do so until Armenia makes peace with Azerbaijan, ceding at least some of the territories it seized around Nagorno-Karabakh. This was not always so. In 2009, Turkey and Armenia signed a set of Swiss-brokered protocols to establish diplomatic relations and eventually reopen their border. But no sooner had the ink dried that Turkish President Recep Tayyip Erdogan, buckling to Azerbaijani pressure, did a U-turn, saying Armenia needed to make concessions on Nagorno-Karabakh first.

Since then, "the ball squashed by pressure from Baku, has rested squarely in Ankara's court," said Khatchig Mouradian, a lecturer at Columbia University. He told Al-Monitor, “There is little faith in Yerevan that Turkey will decouple the normalization of relations with Armenia from the Karabakh conflict anytime soon.”

What’s next: Erdogan continues to view Azerbaijan’s president, Ilham Aliyev, as a chief regional ally. And there are allegations documented by the Black Sea investigative journalists collective that the Turkish president’s family benefits personally from business ties with Azerbaijan. In any case, Erdogan’s tactical partnership with Turkey’s ultra-nationalists make it highly unlikely that he will respond favorably to Pashinian. Russia, which thrives on regional divisions, will remain the big winner.

Know more: Amberin Zaman wrote about the plight of ethnic Armenian lawmaker Garo Paylan as Erdogan courted the far right ahead of the June elections in Turkey. And just last month Sibel Hurtas brought us the story of why Syrian Armenian refugees scarred by the memory of 1915 are avoiding neighboring Turkey.