Despite electoral losses suffered by the alliance led by President Recep Tayyip Erdogan, the nationalists in that alliance were able to improve their standing, which will surely affect Erdogan's future security choices. 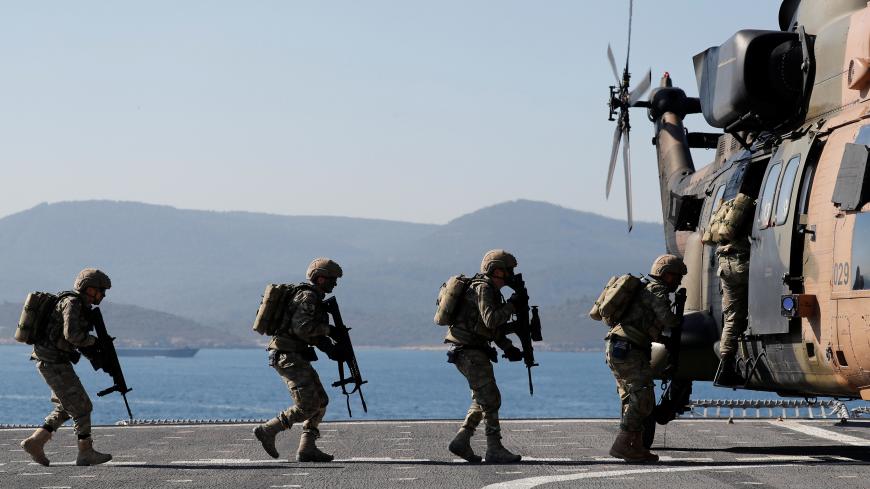 Turkish marines on board the TCG Bayraktar (L-402) take part in a landing drill during the Blue Homeland naval exercise off the Aegean coastal town of Foca in Izmir Bay, Turkey, March 5, 2019. - REUTERS/Murad Sezer

The results of Turkey's March 31 local elections will be debated for a long time to come. The main issues of debate will be the preferences of voters, whether the recently installed executive presidential system is working, and how strong is the public's confidence in Turkish President Recep Tayyip Erdogan’s Cabinet. This confidence is not only about domestic politics, but foreign policy affairs as well.

Results from the vote show that the ruling Justice and Development Party (AKP) sustained substantial losses, receiving about 2 million fewer votes compared to the June 2018 elections, with most of the losses occurring in metropolitan areas, led by Ankara and Istanbul.

Another striking result was a major shift of support from the AKP base to the ultranationalist base, and how Erdogan’s use of “national survival” rhetoric more so benefited the Nationalist Movement Party (MHP). The more Erdogan tried to mobilize his power base with his slogan that the elections were a “matter of national survival,” the more votes the MHP received. In a nutshell, the results show how support for the AKP-led People’s Alliance eroded while the junior partner in the alliance, the MHP, accrued gains.

Also of note was how the state organs led by Supreme Election Council (YSK) resisted the AKP’s demands and priorities, as seen from the struggle in Istanbul.

Security-related foreign policy crises, such as the S-400 vs. F-35 conundrum and developments in northern Syria, become more pressing when coupled with the current economic crisis, which directly affects the lives of voters. As seen by the vote, Turkey cannot maintain its uncompromising stances in internal and external policies while seeking out billions of dollars of funding from foreign economic sources. Turkey's fragile economy is what is preventing the AKP from imposing absolute control over state organs.

In the post-March 31 era, Erdogan will have to reimpose control over his party; conclude the inevitable Cabinet revision before the end of May; put the economy in order; and, most importantly, review security and foreign policy issues that have merged into a single issue. Here, it would not be difficult to surmise that the MHP will have more say in the new Cabinet, thus making the body more hawkish.

Turkey faces a complex package of problems with overlapping actors and issues. For example, while domestic political equations and pressure from the MHP have forced Erdogan to escalate the struggle against the Kurdistan Workers Party (PKK) by adopting a more hawkish approach to northeast Syria, he has to keep in mind the effects of this struggle, both on the domestic economy and in relations with the United States.

To solve Turkey's urgent need of air/ballistic defense requirements, Erdogan has sought cooperation with Russia, all the while complicating relations with the United States, NATO and the Western security bloc, and its receiving F-35 jets.

Erdogan has frequently spoke of the need for military intervention in Syria’s northeast and Manbij, thus raising the Turkish public's expectations. A more pronounced MHP role in the Cabinet will transform those expectations into outright pressure.

Washington managed to stall the issues of Manbij and a safe zone until after the March 31 elections by resorting to diplomatic maneuvers. The United States, while arguing about how to get its soldiers out of Syria, also expanded its local capacity for combat. The outlawed PKK, taking its cue from the United States, accelerated its diplomatic activities and propaganda to influence Western countries. The pressure on Erdogan's Cabinet to step up its struggle against the PKK inside Turkey, as well as in Iraq and Syria, will mean more tension with the United States and the Western security bloc.

The most important outcome of the elections is how MHP leader Devlet Bahceli gained enormous power and influence within the People's Alliance. In Turkey, Bahceli is known by many as the representative of the state's mindset. For sure, there will be a Cabinet reshuffle in the coming weeks, and Bahceli’s influence will increase. Yet some cracks are sure to emerge in the coming weeks in the People’s Alliance as Bahceli asks for more than Erdogan can deliver. Erdogan’s capacity to accommodate Bahceli's demands will determine the future of the alliance. Questions will then arise: Is Erdogan becoming Bahceli's hostage? Will he be able to accommodate Bahceli’s demands amid the grim economy and foreign policy realities?

Due to the MHP’s increased influence over Erdogan’s Cabinet, those who expect Erdogan to soften will be in for a disappointment. We may instead expect him to adopt tougher foreign policy stances, particularly in relation to the PKK.

Time will show whether Erdogan will listen more to Bahceli’s whispers or to the foreign investors leaving Turkey, along with all their money.