The US president's decision to designate Iran's Islamic Revolutionary Guard Corps as a terrorist organization could allow Israel to better justify action against the group in Syria. 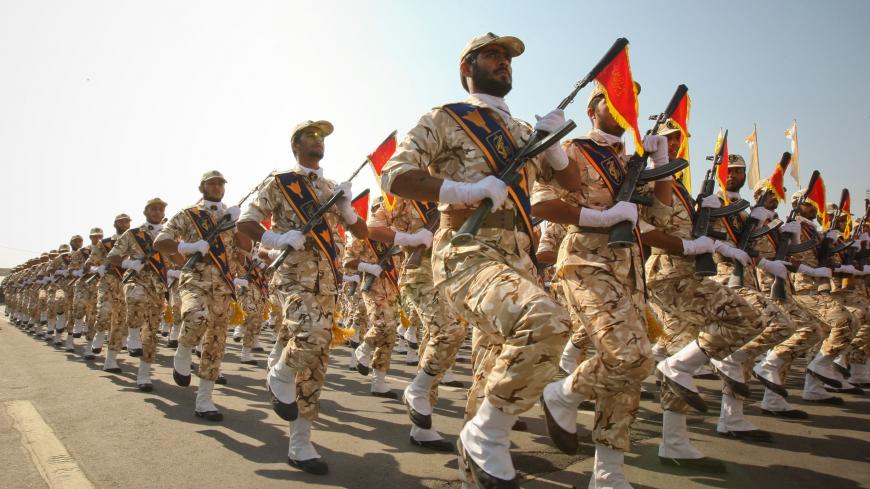 Members of Iran's Islamic Revolutionary Guard Corps march during a parade to commemorate the anniversary of the Iran-Iraq War (1980-88), in Tehran, Iran, Sept. 22, 2011. - REUTERS/Stringer

President Donald Trump's decision to designate Iran’s Islamic Revolutionary Guard Corps (IRGC) as a foreign terrorist organization was not just an election gift to Israeli Prime Minister Benjamin Netanyahu, it was a boon for all Israelis.

The IRGC is and has been, without doubt, Israel’s sworn enemy. It has been indirectly responsible for numerous terror attacks against Israeli citizens in Argentina and Bulgaria through Hezbollah. Two of the institutions that were in charge of arranging Iran’s 2016 Holocaust cartoon competition were directly related to the IRGC. As if that’s not bad enough, the IRGC has been planning to create a base in Syria from which to terrorize Israel’s citizens. Now, with the designation by the Trump administration, the IRGC will have to be more careful about how it threatens Israeli citizens around the world and from Syria, as its designation as a terrorist organization will make Israeli retaliation more justifiable.

It's not just Israeli supporters of Trump’s decision to leave the Joint Comprehensive Plan of Action (JCPOA) who will back his recent decision regarding the IRGC. Israeli supporters of the Iran nuclear deal are also likely to back it, as they witnessed how the IRGC terrorized the post-nuclear deal atmosphere during the term of President Barack Obama. Many backers of the Iran deal in Israel were hoping that after the deal, the IRGC would allow Iranian President Hassan Rouhani to reduce tensions with Israel and the West. The IRGC did the opposite: Soon after the deal went into effect, it tested a missile with a Hebrew banner on it that called for the elimination of the State of Israel. It boosted its Shiite militia forces under its command in Syria, while Iran’s supreme leader and the IRGC’s ultimate commander called for the elimination of Israel. Hassan Nasrallah, the leader of Hezbollah, soon after Iran’s frozen assets abroad were released in 2016 as part of the JCPOA, boasted that “Hezbollah’s budget, its income, its expenses, everything it eats and drinks, its weapons and rockets, come from the Islamic Republic of Iran.”

In the long run, Trump’s decision is unlikely to create lasting cohesion among opposing factions inside Iran, something that would have been of concern to Israel. Yes, the Rouhani government issued a statement of support for the IRGC and condemned Trump. And to show solidarity, members of the Iranian parliament turned up in IRGC uniforms after the designation. However, underlying such statements and photo-ops are fundamental differences of views and interests between the IRGC and the moderate faction headed by Rouhani. To name a few of the differences: Iran’s foreign policy in general and its involvement in Syria in particular, as well as management and control of the country’s economy and economic resources. Therefore, the apparent cohesion created by Trump’s decision is unlikely to last in the long term.

On April 7, Iran’s Foreign Minister Mohammad Javad Zarif tweeted that supporters of Netanyahu, by having called for the designation of the IRGC as a terrorist organization, want to “to drag US into a quagmire on [Netanyahu’s] behalf.” What Zarif does not and would not mention is that without Israel’s initiative or support, the IRGC was already risking war with the United States even before Trump entered office.

During the heyday of US-Iran nuclear negotiations and soon after, and despite Obama writing three letters to Ayatollah Ali Khamenei between 2015 and 2016, on a total of 58 occasions the IRGC undertook activities that could have led to war. This was through the IRGC's armed boats and drones' unprofessional and provocative behavior toward US ships in the international waters of the Persian Gulf. In 2015 and 2016 there were 23 and 35 such incidents, respectively. In 2017, when Trump entered office, there were 14 such incidents. Then, the incidents ended in August same year. Iran claims that such incidents are down due to a change in US behavior. However, the United States denied any such changes. It cannot be ruled out that Iran became concerned that Trump, as he promised during his election campaign, would not be so tolerant of the IRGC’s provocative behavior in the Persian Gulf. It’s unlikely that the IRGC, just because it was labeled a terrorist organization, would now want to enter a new conflict with the United States, especially since such a designation is mostly symbolic and does not add much to the existing heavy US sanctions against the organization.

It's important to remember that the IRGC, now more than ever, is unpopular inside Iran. As well as being deterred by America’s stronger firepower and Trump’s tougher approach, the IRGC is also likely to be deterred by a lack of support at home. Trump is unpopular in Iran because of sanctions, but the IRGC is also unpopular. Trump (wrongfully) walked out of the Iran deal and imposed tough sanctions on Iran’s economy in May 2018, while the IRGC has been pillaging Iran’s economy since the end of the Iran-Iraq War through its corrupt business interests. The IRGC in Iran is synonymous not only with corruption, but also with violence against the citizens of Iran and their arrest and torture, either directly or indirectly through its Basij militia. Whatever sympathies and support it had garnered among Iran’s population for having contributed to the war against Saddam Hussein's invading army have since mostly disappeared due to its own actions.

The IRGC, despite boastful threats, has come to realize the limits of its own capabilities, as Israel has witnessed in Syria. The same is likely to apply to the threats of its supporters: After its designation as a terrorist organization, they said the United States “should order coffins for its soldiers in West Asia.”